At CES 2017, Alexa reigns supreme over the growing consumer market for AI tech 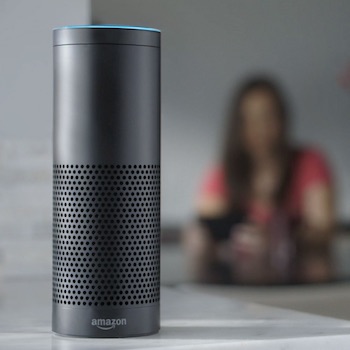 On Sunday, January 8th, the most recent Consumer Electronics Show in Las Vegas wrapped up after many of the world’s largest developers of consumer gadgetry exhibited their latest offerings which are either already on the market or are set to hit stores in the coming months. 2014’s CES showed us the emergence of the Internet of Things (IoT) as an increasingly important part of the consumer tech sector. Autonomous and self-driving vehicles did not make many big headlines until they stole the show at 2015’s CES. Then in 2016, a focus at CES on virtual and augmented realities (VR/AR) presaged an important year for those technologies in which the Samsung Gear VR and Pokemon GO both became consumer phenomenons.

In 2017, many interesting consumer tech concepts were unveiled by tech developers, from trash cans which identify waste that can be recycled to a wearable breast pump which automates some of the difficult work of collecting breastmilk. But in 2017, it looks as though artificial intelligence (AI), and specifically voice assistant technologies, took the focus, even with some names which are by no means new to our readers. The global market for AI is forecast to grow from $643.7 million in 2016 up to $36.8 billion by the year 2025 according to market intelligence firm Tractica. A survey of the hot market for AI and voice assistants at CES can show which players stand to make a strong foray into this growing market.

There can be little doubt that the current conversation surrounding voice assistant technology begins and ends with Alexa, the personal assistant technology developed by Amazon.com (NASDAQ:AMZN). This AI platform has been baked into the growing suite of consumer electronics developed by Amazon, including Amazon’s Echo device. Near the end of November, news came out reporting that more than five million Echo units had sold within two years and Alexa’s voice interaction and app execution capabilities are a major reason for the Echo’s success.

At CES, it looks as though the tech media world couldn’t get away from Alexa, no matter where it turned. Just before CES kicked off, American automaker Ford Motor Company (NYSE:F) announced that it had integrated Alexa into its vehicle computer platforms. A Ford app (or “skill,” as such programs are referred to in the Echo/Alexa domain) for the Echo allows that in-home device to work as a remote starter, for instance, while in-car devices allow drivers to use Alexa for tasks such as searching for travel destinations. American home appliance developer Whirlpool Corporation (NYSE:WHR) exhibited an Alexa-based system for its appliances which gives users the ability to remotely change settings of those appliances, like changing the fridge at a cooler temperature or setting an oven timer. Similar remote controls are being integrated into home appliances developed by American tech giant General Electric (NYSE:GE), although GE’s Echo skill is named Geneva and operates as a third party in the exchange. This means users have to ask Alexa to talk to Geneva to operate GE appliances, making the whole exchange feel a little crowded.

Underscoring Alexa’s dominance in the personal assistant tech world are the incredible number of imitators which copy the intelligent speaker concept without adding much in the way of other innovative features. The Rokid Pebble is one such CES smart speaker which reportedly offers the impressive ability to discern voices and store settings on thermostat, lights and other appliances which are specific to different people. California-based startup SmartBeings displayed the WooHoo device which offers a display and facial recognition technology on top of its own AI voice assistant. Even American tech giants Google and NVIDIA Corporation (NASDAQ:NVDA) have taken a stab at this market with the NVIDIA Spot, which includes Google Assistant technology and is designed to reach multiple rooms so that a person doesn’t need to be within a certain range of a single speaker to interact with the voice assistant.

Although some commentators are quick to decry what they see as rampant misapplications of the term “artificial intelligence” by the press divisions of many tech companies, there can be no doubt that many consumer tech developers are hopeful that machine learning will become more valuable to their customers. Technically, there are differences between artificial intelligence, machine learning and the deep learning that will make the IoT of the future much more robust, but platforms for data analytics designed to improve the experience of using a wide array of consumer devices would seem to suggest that machine learning is reaching a point of maturity in the consumer tech world.

One of the more eye-grabbing products to proudly wear the AI badge is the Concept-i concept vehicle which was exhibited by Japanese automaker Toyota Motor Corp. (NYSE:TM) Toyota’s AI tech works in the Concept-i to gauge user responsiveness to stimuli, including haptic (touch) and visual stimuli, in order to improve driver safety. The Concept-i also includes its own personal AI assistant, Yui, which greets passengers and communicates important messages on a dashboard display. Such concept vehicles are often shown at CES and the ongoing North American International Auto Show (NAIAS) in Detroit, MI, without ever reaching the consumer market as is but features of cars like the Concept-i tend to work their way into future generations of vehicles.

Data analysis techniques are useful to consumers in another entertainment device exhibited at CES which could be very beneficial to those recovering from stroke and other physical injuries. South Korean tech firm Neofect showed off the Rapael Smart Glove, a wearable device for patients who need physical therapy to regain motor skills in the hand, fingers and wrist. The device pairs with an Android app which simulates tasks like playing ping-pong, pouring wine or dealing cards to strengthen hand muscles. The Rapael also tracks motion data in order to mark the progress of a patient and provide that information to a medical supervisor.

AI-related technologies are even making their way into the bedroom, albeit in a way that’s much less lurid than movies like Her would seem to suggest. Minneapolis-based Select Comfort Corp. (NASDAQ:SCSS), the makers of Sleep Number mattresses, announced the development of the it Bed. The it Bed includes a system called SleepIQ which uses biometric sensors to measure heart and breathing rates of sleeping occupants. It also provides an application programming interface (API) for third-party health and fitness apps which can take the biometric data and make suggestions via smartphone regarding a person’s sleep schedule, for instance.