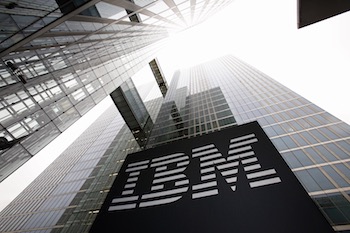 In 1992, Bill Clinton was elected President of the United States. Hurricane Andrew bore down on the American Southeast, causing billions in damage after wreaking destruction from Florida to Louisiana. Johnny Carson retired from The Tonight Show. The Buffalo Bills were in the Super Bowl. Los Angeles saw a string of deadly riots related to the LAPD’s televised beating of Rodney King. And 1992 was the last year during which a company other than American information technology firm IBM (NYSE:IBM) could claim that it had earned the greatest number of U.S. patents.

Today, IBM announced that, yet again, it stands supreme in the U.S. patent world, earning the most grants from the U.S. Patent and Trademark Office during 2016 and claiming the top spot among private entities for the 24th year in a row. IBM earned a total of 8,088 U.S. patents last year at a rate of 22 patents per day, besting its next closest tech rival by more than 2,500 U.S. patents and becoming the first company to receive more than 8,000 U.S. patents in one year. IBM earned about 4,400 more U.S. patents during 2016 than third-place Canon Inc. (NYSE:CAJ), which took the last lead among private tech firms over IBM back in 1992. Patent totals cited by IBM come from data compiled by IFI CLAIMS Patent Services. 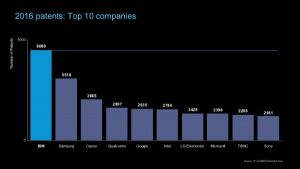 “Leading the world in innovation for 24 years in a row is a result of IBM’s unmatched commitment to innovation and R&D – reflected in this year’s new U.S. patent record,” said IBM chairman, president and CEO Ginni Rometty in a press release. “We are deeply proud of our inventors’ unique contributions to discovery, science and technology that are driving progress across business and society and opening the new era of cognitive business.” IBM’s 2016 patents includes the work of more than 8,500 inventors residing across 47 states and territories, as well as 47 countries. IBM’s New York inventors contributed to 2,700 patented inventions, the highest total contributed from any single state. Annually, IBM invests $5.4 billion into research and development, more than half of which is invested in R&D activities within the U.S. 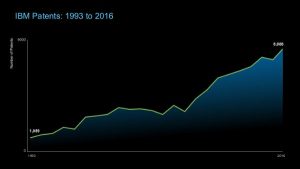 More than 2,700 patents were issued to IBM during 2016 to protect inventions in the fields of artificial intelligence (AI), cognitive computing and cloud computing. Just this portion of the IBM patent portfolio includes more patents than Amazon and Microsoft received overall last year, and nearly as many patents as Google received all of last year (Google received 2,835 patents total).

Much of IBM’s R&D into AI and cognitive computing have supported the growth of the Watson cognitive computing platform. The deep learning and powerful analytics engine offered by Watson has an incredible array of industrial applications, from digital assistant technologies in automotives such as Ford Sync seen at the most recent Consumer Electronics Show to the insurance industry, where Watson recently put 34 claims staffers out of work with one Japanese firm. IBM doesn’t report revenues for Watson specifically but Watson’s Internet of Things (IoT) platform grew to 6,000 partners by the end of 2016, so it seems likely that Watson is becoming more profitable. 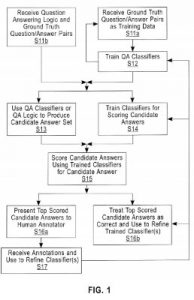 One patent protecting a machine learning technology which makes computing platforms like Watson so valuable was issued last June to IBM. U.S. Patent No. 9384450, titled Training Machine Learning Models for Open-Domain Question Answering System, claims a method for training a machine learning model which involves receiving trained classifiers for question answering to score candidate answers. The technique improves machine learning techniques using ground truths to answer questions posed by a person given the wide variety of syntax which could be used to pose a question. Interestingly, the method claimed here involves a human operator who judges whether a candidate answer is a correct answer for a given question, so while Watson has obviated some jobs, it looks like it’s creating new ones through its machine learning platforms.

Watson Health, which just announced its first partnership last June, is another example of the far-reaching applications for IBM’s cognitive computing technologies. A press release published in mid-December announced that a study conducted by Watson Health in partnership with Barrow Neurological Institute had identified new genes linked to amyotrophic lateral sclerosis (ALS), also known as Lou Gehrig’s disease. On December 22nd, IBM announced that it entered into a five-year agreement with the Cleveland Clinic to develop better population health models which could be used by healthcare providers across the nation. 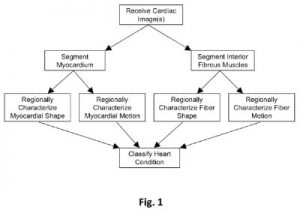 IBM’s 2016 patents reflect some of the corporation’s move into healthcare, as is reflected by U.S. Patent No. 9311703, titled Method and System for Categorizing Heart Disease States. It claims a method which involves segmenting cardiac images into myocardium and interior fibrous muscles segmentations which are then used to develop regional characterizations useful to classify heart conditions. This innovation is designed to reduce the complexities involved with cardiac disease categorization by categorizing conditions without the need for training data for every potential diseased state.

IBM’s cloud technologies allow for the smart provisioning of Watson and other information technologies developed by the company for use by industrial leaders across the world. In December, news reports indicated that Italian shipbuilding company Fincantieri SpA (BIT:FCT) would be adopting a hybrid cloud platform from IBM to improve efficiencies in designing, building and deploying new ships in response to increased demand for cruise liners. IBM’s Bluemix cloud platform will be used by New York City-based wellness real estate firm Delos to access Watson technologies for discovering insights into improving the design and construction of healthier indoor environments. IBM has also been involved recently with the development of OpenWhisk serverless architecture which is intended to ease app development by reducing the time spent by developers on server configuration. 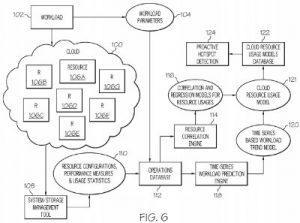 Improved performance for cloud-based applications is achieved through IBM innovations like the one reflected within U.S. Patent No. 9329908, titled Proactive Identification of Hotspots in a Cloud Computing Environment. It claims a method which involves identifying parameters for a number of workloads in a cloud environment, correlating data from server, storage and network data to identify resources for each workload, predicting a load to be generated by all workloads in the future and detecting a hotspot comprising resources of the cloud computing environment which can become constrained and limit performance. This innovation enables the detection of hotspots forming at the server, storage or network levels of a cloud environment to prevent workloads from being bottlenecked by such a hotspot.