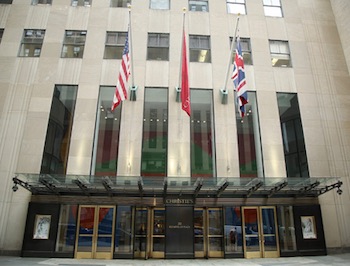 On December 9th, Dallas-based auction house Heritage Auctions filed a copyright infringement complaint against New York City-based Christie’s, Inc. and Christie’s database subsidiary Collectrium. The suit alleges that Christie’s and Collectrium engaged in stealing copyright-protected images and lifted other private data from Heritage’s servers in order to drive its own sales. The case, which is filed in the U.S. District Court for the Northern District of Texas (N.D. Tex.), involves two of the three largest auction houses in the world and could result in a huge statutory damages award against Christie’s, which claims to be the world’s largest auction house according to Heritage’s complaint.

The official complaint filed by Heritage follows an announcement by Christie’s to its customers that it had built a subscription-only database developed by Collectrium. The database was allegedly marketed as providing access to more than seven million results in a “proprietary database.” As Heritage alleges:

“The only thing ‘exceptional’ about the content on Christie’s Collectrium site is the manner in which Christie’s compiled it, namely through the surreptitious and unlawful theft of huge volumes of Plaintiffs’ proprietary and copyrighted auction data, photographs and text from Plaintiffs’ servers. As of the filing of this Complaint approximately 2.7 million of the 11+ million listings on Defendants’ site were stolen from Plaintiffs.”

Heritage first identified this July that a crawling “spider” software program was operating on its servers accessible through HA.com, Heritage’s official website for offering online-only auctions and providing image catalogues of items available through live auctions. In its complaint, Heritage noted that the activities conducted by the spider software program, including database scraping or copying content for commercial purposes, is prohibited under terms of a Website User Agreement to which each registered user of HA.com agrees upon creating an account.

Heritage identified the account from which the spider software originated and traced it back to a computer which was used to set up an account for Collectrium’s director of product development. Heritage further determined that the the Collectrium executive’s account accessed the HA.com website through an Internet protocol (IP) address associated with Christie’s. Although Heritage has employed technological means to alert IT professionals to abnormally high traffic levels originating from a single account or IP address, Heritage alleges that the defendants took measures to randomize the IP addresses used to access their HA.com accounts so as not to bring attention to their activities. For example, one of the accounts mentioned in the complaint accessed the HA.com website more than 186,000 times over the course of 10 days, but period randomizations of the IP address to different regions around the world kept Heritage’s protective systems from identifying the suspicious behavior.

In all, Heritage’s complaint identifies 31 such HA.com accounts associated with the activities of the defendants’ spider software including accounts using false identification, including one account known as the “Jason Bourne from Kathmandu” account. Within one 18-hour period, the Jason Bourne account accessed the HA.com website more than 131,000 times. Heritage also identified spiders which scrawled through the HA.com website without logging in to identify pages hosting the desired content before logging into the HA.com account and quickly scraping the desired content. In total, about five million HA.com websites were accessed by the defendants’ 31 accounts. Although Heritage has closed down accounts it has found to be engaging in the spider software activities, the auction house believes that defendants continue to access HA.com for content scraping as recently as November 19th.

Christie’s and Collectrium, which Christie’s acquired in 2015, have allegedly profited from their copyright-infringing activities by using the auction information, along with copyright-protected images, in a cloud-based database which requires monthly subscription fees ranging from $90 to more than $400 for those who want access. Heritage charges that Collectrium works as a “Trojan horse” that attracts auction business to Christie’s by taking information from the HA.com auction site and charging customers for access to “its advertised compilation of millions of data and item descriptions from past auctions.” Where data and content from HA.com has been used in the Collectrium listings, any reference to Heritage has been removed, further diverting potential consumers away from Heritage.

The suit includes eight counts including individual counts for copyright infringement, violation of the Computer Fraud and Abuse Act (CFAA), violations of the Digital Millennium Copyright Act (DMCA), harmful access by computer under Texas state law, trespassing, unfair competition, civil conspiracy and breach of contract. Heritage is seeking statutory damages of up to $150,000 per instance of copyright infringement, up to $25,000 for each replication of Heritage’s content which concealed Heritage’s copyright and up to $2,500 for each circumvention of technological protection means on HA.com. Given the alleged number of infringing listings and technological circumventions, this case could easily reach a multi-billion dollar verdict if it goes in favor of Heritage.