The Four Biggest Tech Trends of 2016 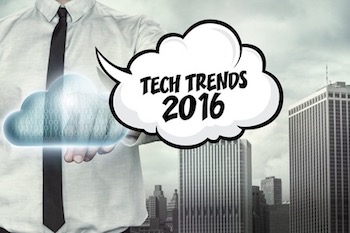 Recently, we took a closer look at four of the largest trending stories playing out in the world of intellectual property and patents during 2016 (see here and here). Now we turn to the world of technology to see what trends have been developing in the technology sector over the past year. From an ever-widening scope of business activities being pursued by Silicon Valley’s largest firms to growing government authority over one sector of Internet services, there have been plenty of interesting stories playing out on the stage of America’s tech sector.

Tech Giants Grow Their Footprint with Consumers, from Autonomous Vehicles to Grocery Delivery

Remember the Standard Oil octopus? On September 7th, 1904, a drawing by political cartoonist Udo J. Keppler wa published in Puck, a humor magazine published between 1871 and 1918. The cartoon, titled “Next!”, depicted the Standard Oil conglomerate as a storage tank with tentacles that wrapped around the steel, shipping and copper industries and multiple government institutions, with one tentacle reaching towards the White House.

It’s doubtful that we’ll see a return to U.S. antitrust law as a major legal development, but the comparison to early 20th century conglomerates might strike a parallel with the activities of Silicon Valley tech multinationals. Consider Alphabet Inc. (NASDAQ:GOOGL), the parent holding company of Google and a host of other small to midsize tech developers. Coverage of Alphabet’s patent application filings has rendered insights into autonomous vehicle, wind turbine and satellite technologies developed within that corporation. Both Google and e-commerce giant Amazon.com (NASDAQ:AMZN) made moves this year to expand online shopping services to fresh grocery delivery. Amazon itself has been making the transition from e-commerce platform to consumer electronics developer in recent years and has seen success with products like the Kindle, Alexa and the Amazon Echo.

At the start of the year, it looked like many of the top tech firms were on pace to have record years in terms of patent grants earned. Through the first quarter of 2016, Samsung Electronics (KRX:005930) earned more than 2,000 U.S. patents and IBM (NYSE:IBM) earned nearly as many, both companies earning patents at a rate that would outstrip their 2015 totals. Increased patent filings among Silicon Valley’s Big 5 (Google, Amazon, Microsoft Corporation [NASDAQ:MSFT], Facebook Inc. [NASDAQ:FB], and Apple Inc. [NASDAQ:AAPL]) since 2009 highlight the increased investment these companies are making in building their patent portfolios. According to Innography’s patent analysis tools, Samsung has earned 9,701 U.S. patents through 2016, IBM has earned 8,008 U.S. patents, Microsoft earned 3,329 U.S. patents and Apple earned 2,712 U.S. patents; it should be noted that these totals include design patents which aren’t included in some annual U.S. patent tallies, like those provided by the Intellectual Property Owners Association.

Cloud and cognitive computing platforms continue to be major focal areas for these tech firms. Microsoft’s Azure cloud platform earned an important industrial partner this July in the Predix industrial Internet service developed by General Electric (NYSE:GE). Microsoft’s acquisition of LinkedIn, announced this June, was the largest such corporate purchase in Microsoft’s history and instantly makes it a big player in the social media space. IBM has been putting a lot of focus into its Watson cognitive computing technology, a platform which began moving into the healthcare sector this year through collaboration with Bausch & Lomb on an app useful for performing better cataract surgeries.

For decades now, the world of consumer technology has been breathlessly awaiting the advent of virtual reality (VR) technologies which can take a human user and immerse that person in a digital environment. At the 2016 Consumer Electronics Show there were several major tech firms exhibiting VR, from Google Cardboard’s open source VR platform to a Qualcomm Inc. (NASDAQ:QCOM) partnership on a VR platform powered by the Snapdragon 820 processor. Perhaps the first major foray for any tech developer into the VR consumer market has been made by Samsung, which released the Gear VR mobile headset developed in partnership with Facebook’s Oculus VR in November 2015. This May, Oculus announced that more than one million people used a Gear VR headset during the month of April to access some form of virtual reality content.

Other virtual reality news coming from the tech sector this year supports the idea that some highly recognizable tech companies should be releasing VR platforms in the not-so-distant future. Microsoft, which has been working on the development of its HoloLens mixed reality platform, announced a new holoportation 3D capture technology implemented through the HoloLens to create social gathering spaces in VR environments. At Facebook’s recent F8 developer’s conference this past April, corporate executives unveiled a 10-year plan for the social media outlet which included new 3D video editing technologies for easier sharing of virtual reality experiences among Facebook friends. Also in April, we reported on a patent application filed by Apple for a VR headset which could integrate with a portable electronic device.

And yet privacy is only one of a slew of issues rocking social media this year, especially Facebook. That particular social media firm has been dogged by many issues related to its Trending News section. In May, media outlets were reporting on an anti-conservative bias playing out at the company’s poorly managed editorial division, which some anonymous reports criticized as enabling censorship and for having a poor working environment. Facebook did the best it could to rid itself of human biases by eliminating human workers and instead employing a algorithm to spot trending articles, but by this September that too was derided for enabling the spread of fake news stories. As if promoting unsubstantiated news reports wasn’t bad enough, other news this year indicates that Facebook is used to conduct one-third of the world’s illicit weapons sales. For its part, Twitter was slammed earlier this year for its inability to prevent illicit drug sales through its own social media platform. Facebook, Twitter and others have also consented to a charge from the European Commission to rid their platforms of hate speech but that effort faces issues in the face of U.S. attitudes on free speech.

Another major story affecting the tech world this year was an increasing regulatory regime building at the Federal Communications Commission (FCC) in the waning days of the Obama Administration. FCC wrested regulatory control over Internet service providers (ISPs) from the Federal Trade Commission (FTC) back in 2015 through the agency’s Open Internet Order which reclassified ISPs as common carriers under U.S. telecommunications law. The net neutrality rules invoked by the FCC in its Open Internet Order were upheld this June in a court decision from the District of Columbia Court of Appeals (D.C. Cir.) which agreed with the FCC on the classification of ISPs as Title II common carriers.

Emboldened by this new power over ISPs, the FCC has pushed a few measures during 2016 in order to further rein in ISPs. This March, FCC Chairman Tom Wheeler released a draft of broadband privacy rules which sought to control how ISPs could use consumer data, especially where advertising was concerned. These privacy rules were the subject of a July hearing of the U.S. Senate Committee on Commerce, Science & Transportation in which representatives of the FTC and the cable industry both raised dissents over the lack of consumer harm in triggering the new rulemaking. Despite these criticisms, the FCC passed broadband privacy rules this October which allows ISP customers to opt-out of data collection techniques used for advertising purposes.

By the end of the year, however, a tidal change in opinions regarding the FCC’s oversight of ISPs seemed to at least begin. In February, the FCC’s board of commissioners also approved set-top box rules proposed by Wheeler which would require set-top box companies to provide information to competing app developers, giving them the ability to create apps for those set-top box platforms. But by September, one of the FCC commissioners voting in favor of the rules was wondering aloud as to whether the FCC had the authority to implement such rules.

The FCC’s Title II common carrier classification could come into even further scrutiny with the planned merger of AT&T (NYSE:T) and Time Warner (NYSE:TWX). The vertical merger puts Time Warner’s content development businesses under the same corporate umbrella as one of the country’s largest mobile services provider. If AT&T were to take content from HBO or other Time Warner entertainment divisions and provide it to their wireless consumers at a lower cost compared to other content providers, it could be considered a zero rating practice which runs afoul of FCC net neutrality rules.