Patent Infringement Pleading Standards Since the Abrogation of Rule 84 and Form 18: A Year in Review 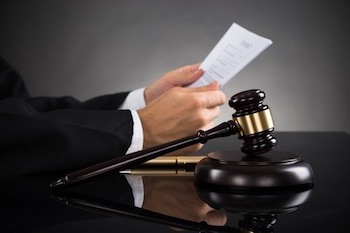 For nearly a decade, complaints in almost all civil suits have been examined under the “plausibility standard” introduced by the Supreme Court in Bell Atlantic Corp. v. Twombly and reiterated two years later in Ashcroft v. Iqbal. Under the pleading standards of Twombly and Iqbal, a complaint must be dismissed unless it alleges facts that state a claim to relief that is “plausible on its face.” Mere conclusory statements supporting “threadbare recitals” of the elements of a claim do not suffice; the facts as alleged must be able to support a reasonable inference of the defendant’s alleged liability.

There was one controversial holdout against Twombly’s plausibility standard for civil complaints. In McZeal v. Sprint Nextel Corp., the same year Twombly was decided, the Federal Circuit held that a complaint for direct patent infringement would survive scrutiny as long as it contained at least the allegations set forth in Form 18 (then Form 16), appended to the Federal Rules of Civil Procedure. The Federal Circuit relied on former Rule. 84, which provided that the Appendix of Forms would suffice for the Federal Rules of Civil Procedure. Form 18, a sample complaint for patent infringement, required only five allegations: (1) a statement of jurisdiction; (2) a statement that the plaintiff owned the asserted patent; (3) a statement that the defendant had been infringing the patent by making, selling, and/or using an accused device; (4) a statement that the plaintiff had given the defendant notice of its infringement; and (5) a demand for injunctive and/or monetary relief.

In 2012, in In re Bill of Lading, the Federal Circuit acknowledged that Form 18 might have only presented a “bare allegation” of direct infringement, but stood by its conclusion in McZeal, that a patent infringement complaint which followed Form 18 would survive a motion to dismiss. The Federal Circuit stated to the extent any conflict existed between Twombly and the Forms, the Forms would control. The Federal Circuit therefore did not need to decide whether minimum compliance with Form 18 ever falls short of Twombly’s plausibility standard.

Last December, the 2015 Amendments to the Federal Rules of Civil Procedure abolished Rule 84 and the Appendix of Forms, removing any doubt that Twombly’s plausibility standard applies to claims for direct patent infringement. The elimination of Rule 84 and Form 18 raised many questions about whether pleading standards for direct infringement would change and, if so, how. Over the past year, many district courts have tried to answer these questions. Below is an overview of the different conclusions reached by district courts, but first, it would be worth reviewing Federal Circuit precedent on the issue.

The Federal Circuit has not yet opined on the pleading standards of a complaint under the 2015 amendments, and it has specifically avoided analyzing Form 18 against Twombly’s plausibility standards in the past. In Bill of Lading, the court’s application of Form 18 was independent of any consideration of Supreme Court precedent on plausibility. And although the court relied solely on Form 18 to assess direct infringement claims, it looked “to Supreme Court precedent for guidance regarding the pleading requirements for claims of indirect infringement.” However, two judges have commented on the efficacy of Form 18 under Twombly, reaching opposite conclusions on the matter.

In his dissent-in-part in McZeal, Judge Dyk opined that the bare allegations of patent infringement in the form would be “inadequate to provide sufficient notice to an accused infringer under a theory of literal infringement.” Two deficiencies Judge Dyk identified in former Form 18 were (1) its failure to state the asserted claims and (2) its failure to allege which features of the accused device infringe the corresponding limitations of those claims. Prophetically, Judge Dyk hoped that the “rulemaking process [would] eventually result in eliminating the form,” or at least modifying it to add such allegations.

On the opposite end of the spectrum, however, was Judge Wallach in K-Tech v. Time Warner Cable. In K-Tech, the Federal Circuit restated its holding in In re Bill of Lading, that to the extent the forms conflict with the standards articulated in Iqbal and Twombly, the forms would control. However, the K-Tech court cautioned that its holding was not intended to imply that any such conflict actually existed, and it noted that a complaint following a form may very well comply with Twombly’s plausibility standard. In his concurrence, Judge Wallach opined that Form 18 illustrated allegations which would be adequate to state a plausible claim for relief in alleging direct patent infringement under Twombly.

Given these competing views, how the Federal Circuit will ultimately conclude on pleading standards for direct infringement is still up in the air.

What the District Courts Are Saying

First, In Thermolife Int’l, LLC v. Vitamin Shoppe, Inc., the Southern District of Florida required that the plaintiff allege facts showing infringement for each asserted claim, dismissing the complaint as to two claims where the plaintiff asserted three claims, but only charted the accused device against one.

The second group of cases are not so strict. These cases require that a court must be able to reasonably infer that the accused product infringes each element of at least one asserted claim. Courts in the Northern District of California, Georgia, Illinois, Massachusetts, and Nebraska have applied this element-by-element approach in determining plausibility. However, compliance with this line of cases does not require a plaintiff to outline specific infringement contentions in their complaint. For example, the in Windy City Innovations, LLC v. Microsoft Corporation, the Northern District of California found that a complaint was sufficient to allow a court to draw this inference where it described (1) the accused instrumentalities and their allegedly infringing functions, and (2) the ways in which the accused instrumentalities met the claims of the asserted patents. Additionally, as the Federal Circuit noted in McZeal, where such information is in the possession of the defendant and cannot be obtained through a reasonable pre-suit investigation, a plaintiff may plead on information and belief that the accused device practices certain limitations. See Vigil Systems Pty. Ltd. v. Trackit, LLC, 16-cv-198, 2016 WL 4595538 (S.D. Cal. Aug. 22, 2016).

The third group of cases only require that the plaintiff allege that the accused devices possess some unique feature as the patented system. For example, in Incom Corp. v. The Walt Disney Company, the Central District of California stated that a plaintiff would satisfy the pleading standards under Twombly by “specifically identifying Defendants’ products and alleging that they perform the same unique function as [the plaintiff’s] patented system.” The Southern District of New York in Iron Gate Security, Inc. v. Lowe’s Companies, Inc. applied a similar standard, stating that a complaint that alleges that a specific product infringes the patent by virtue of “certain specific characteristics” meets the plausibility standard.

An outlier, the District of Nevada concluded in Hologram USA, Inc. v. Pulse Evolution Corporation that the 2015 amendments had no effect on the pleading standards in patent infringement cases. The District of Nevada relied on the Advisory Committee notes to the rule amendments, which stated that “The abrogation of Rule 84 does not alter existing pleading standards ….” Other courts have declined to follow the Hologram holding. However, it is worth noting that in Tannerite Sports, LLC v. Jerent Enterprises, the District of Oregon commented that Form 18 may satisfy the plausibility standard in certain cases. However, Tannerite expressly rejected Hologram’s conclusion that compliance with former Form 18 is necessarily sufficient to state a plausible claim for relief, stating that such a conclusion would be inconsistent with the Federal Circuit’s application of Twombly pleading standards to indirect infringement claims.

The pleading standards for direct patent infringement are not well settled a year after the abrogation of Rule 84 and Form 18. What we do know at this time is that a complaint which includes allegations of fact tying the accused devices to each element of each asserted claim will be sufficient in any district, and a complaint which ties the accused devices or their functionalities to each element of at least one asserted claim will be sufficient in most districts. Courts will also consider the likelihood that a reasonable pre-suit investigation would yield sufficient information about the accused products in determining the appropriate pleading standards.

Vigil Systems Pty. Ltd. v. Trackit, LLC, 16-cv-198, 2016 WL 4595538 (S.D. Cal. Aug. 22, 2016) (applying plausibility standard, denying motion to dismiss, finding that plaintiff alleged all information that it could given that all pertinent information was in the defendant’s control)