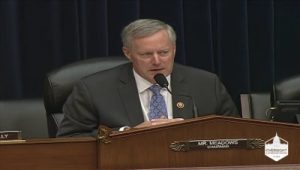 On the afternoon of Wednesday, December 7th, the U.S. House Committee on Oversight and Government Reform’s Subcommittee on Government Operations convened a hearing to look into patent examiner time and attendance abuse issue and what steps have been taken by the U.S. Patent and Trademark Office to address the problem. The day featured some heated lines of questioning which reflected no small amount of frustration on behalf of some subcommittee members on the current progress of operations at the USPTO in light of charges regarding examiner timesheet fraud.

The hearing (see full video above) follows a series of investigative reports on patent examiner activity at the USPTO conducted by the U.S. Department of Commerce’s Office of the Inspector General (OIG). In August 2015, OIG released an investigative report probing the activities of an anonymous Examiner A which found that the examiner defrauded American taxpayers out of $25,500 during 2014’s fiscal year by fraudulently claiming 730 work hours. This August, OIG released another investigative report which found that 8,067 covered examiners had claimed 137,622 hours of work unsupported by evidence over the course of a 9-month period. Over a 15-month period, OIG also found that 43 percent of unsupported work hours were claimed by a total of 415 examiners, each of which had more than 10 percent of their claimed work hours unsupported by evidence.

As Rep. Mark Meadows (R-NC), the chairman of the House government operations subcommittee, noted in his opening remarks, the numbers provided by the OIG reports are conservative estimates that took an open-minded view on what constituted supporting evidence for actual hours worked. Meadows said that some less conservative estimates claimed nearly twice the number of unsupported work hours. “When we have this, there’s a chilling effect on other people in the workforce,” Meadows said. “Some argue that the total amount of unsupported hours is less than 2 percent, but even one unsupported hour is too many.” 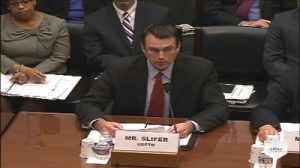 Speaking on behalf of the USPTO and the steps it was taking to curb time and attendance abuses was Russell Slifer, Deputy Under Secretary of Commerce for Intellectual Property. Of the 8,300 patent examiners working at the agency, Slifer maintained that “the overwhelming majority are hard-working, highly educated and perform their jobs with the utmost integrity.” Slifer cited new IT dashboard tools and employee review procedures designed to curtail potential abuses. “Any hour of time claimed and not worked is not acceptable,” Slifer said.

“[Time and attendance abuse] may not be widespread, but the data established that claiming hours not worked is a problem at the [USPTO],” said David Smith, Acting Deputy Inspector General of the U.S. Department of Commerce. Smith cited falsified hours from paralegals working at the Patent Trial and Appeal Board over the course of years led to more than $5 million in wasted taxpayer funds. As for the telework program, which at times has been closely associated with the time and attendance abuse scandal, Smith noted that while OIG recognizes that patent examiners can accomplish work offline, but the OIG also noted that certain patent examiners had no computer activity for 48 or more hours on 1,300 days over the course of the study. Further, Smith testified that 56 of the 415 identified examiners with large percentages of unsupported hours only averaged about 24 hours of supported work per 80 hours of analyzed work time. That’s about three working days within a two week work period.

Representing the interests of USPTO patent examiners was Lisa Schwartz, President of the Patent Office Professional Association (POPA). She criticized the OIG reports for being based on what she called “flawed methodology” that didn’t capture all of the work performed by examiners. She argued that unreported and uncompensated overtime, which examiners regularly worked to meet their production goals, far exceeded the nearly 2 percent of total hours which were unsupported by work evidence. Schwartz said that, per pay period, the average examiner worked five to 10 hours of uncompensated time. She also noted the cost-effectiveness of the telework program and how it saves the agency more than $100 million each year, including $38 million in real estate costs. In 2015, the 2,000 full-time teleworkers were 6 percent more productive in terms of annual production units.

A review of how well the USPTO was incorporating the recommendations of the OIG was proffered by Dr. David Chu, representing the National Academy of Public Administration (NAPA). His testimony identified a number of recommendations for USPTO to implement to strengthen the telework program including stronger supervisor tools and requiring examiners to use presence indicators online for all examiners, not just those in the telework program. He also called for more attention to patent quality. “The ability to protect IP correctly is a foundational element for the success of the American economy, and that hinges on the quality of patents granted,” Chu said.

“There’s no human problem that cannot be improved with another hearing,” mused Rep. Gerry Connolly (D-VA). Connolly argued that, while time and attendance abuse is unacceptable, proof of actual misconduct was not available through OIG reports. “Any amount of fraud is unacceptable if proved true,” Connolly said. A co-sponsor of the Telework Enhancement Act of 2010, Connolly said that despite the association of time and attendance abuses with the USPTO’s telework program, OIG did not make a comparison between on-campus examiners and those in the telework program. He also raised the question of why a high number of unsupported work hours were attributable to patent examiners who were identified for high levels of performance.

The day’s hearing quickly turned contentious once Rep. Jim Jordan (R-OH) began his questioning. He appeared to try to undermine the reputation of NAPA, represented on the panel by Chu, as a reputable outside authority by blasting the organization for awarding its 2016 Elliot L. Richardson Prize for distinguished public service to John Koskinen, the current Commissioner of the Internal Revenue Service (IRS) who had been targeted in impeachment proceedings by Republicans on Capitol Hill for allegedly withholding emails important to a Congressional investigation into the IRS. “You understand that 422 backup tapes containing 24,000 emails were destroyed under his watch?” Jordan asked Chu. Later during a second round of questioning, Jordan continued: “The NAPA report is used to support that something’s not a problem, by an organization that gave an award to a guy who was censured by this very committee… If that’s not a story line, I don’t know what is.” Koskinen was quickly defended by Connolly, who said that “no amount of innuendo or smear will tarnish his reputation.” Elsewhere, Rep. Eleanor Holmes Norton (D-DC) openly questioned why Koskinen would be brought up in this hearing at all given the fact that impeachment proceedings ended after referral to committee. 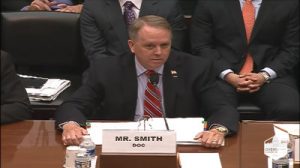 IPWatchdog coverage of examiner time and attendance abuse was mentioned by Smith in response to questioning from Connolly on the Congressman’s insistence that there was no proof of examiner time and attendance abuse outside of Examiner A. Smith cited comments from patent examiners in an article published by IPWatchdog on patent examiner time and attendance abuse as proof that such abuse was actually ongoing. “One said he or she can do [20 hours of work in 10 hours]… and was completely justified in claiming all 20 hours worked on a timesheet,” Smith said. Connolly asked why Smith didn’t take that information to the authorities, and Smith noted that OIG’s hands were tied in that regard by the Computer Matching and Privacy Protection Act of 1988. As Norton added later, 43 percent of the unsupported work hours were contributed by examiners who were also identified by USPTO as being highly productive, which to her underscored a need to revise production goals that hadn’t been done by art unit since the 1970s.

In his questioning, Meadows took exception to the USPTO representatives’ charges that the problem is not widespread despite more than 400 patent examiners being identified in the OIG report as having unsupported work hours. “Here’s my problem,” Meadows said. “You’ve got 8,000 great employees, but there’s 400 or so taking advantage of the system and suggesting that it’s okay not to login to their computer for two days and actually they’re doing work.” Slifer acknowledged that such two-day periods of computer absence were not a best practice. “What I find in the [OIG] report is that there’s no logical conclusion you can come to other than that someone is gaming the system,” Meadows said. Slifer noted that 30 patent examiners had faced disciplinary action through internal controls at USPTO but that nobody had been terminated as a result of the most recent OIG report.

“Shocking, shocking, shocking,” said Rep. Glenn Grothman (R-WI) in response to what he felt was the USPTO’s poor methodology in obtaining evidence that examiners were working. “It confirms what a lot of people think about the Washington, DC work ethic,” he said. He noted that OIG’s report methodology considered badge swipe-ins as evidence of a full day’s work when there were no other assurances that an employee was actually working and not playing video games, to give one example provided by Grothman.

Joining the day’s hearing was Rep. Jody Hice (R-GA), not a member of the government operations subcommittee but a member of the larger House oversight committee. Hice was mainly interested in grilling Schwartz on her work with the professional union representing USPTO employees, noting that Schwartz was hired as a patent examiner for chemical engineering patents but that she had focused on solely union work for about eight years despite the fact that American taxpayers still pay her salary. “I’m not attacking the union or union work, the problem I have is that you’re using time the American taxpayer pays to examine patents and you’ve done none of that in eight years,” Hice said. Norton would later argue that such time paid for union work isn’t a “gift” to Schwartz or the union, but rather a reflection U.S. labor law. She added that, because Schwartz’s work involved taking care of grievances during official time, it actually saved the government money on the overtime required to handle such matters.