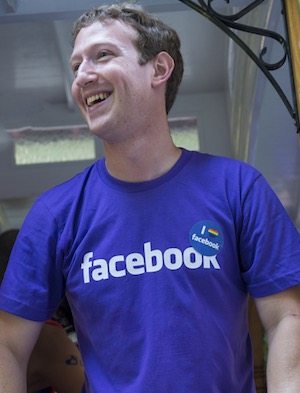 The Twitterocracy that helped Trump become the President-elect gives us some insight into his views on the tech sector. Trump has used his Twitter account to criticize the activities of individual companies through the social media platform. A compilation of Trump tweets regarding tech companies compiled by Recode shows Trump criticizing Cook for Apple’s small device screens and privacy stance in the wake of the San Bernardino shootings, Sandberg for being egotistical and Bezos for his ownership of The Washington Post. As for Facebook CEO Mark Zuckerberg, Trump thought he should “get a pre-nup” in a May 2012 tweet.

Interestingly, Zuckerberg is one major face from Silicon Valley who isn’t reportedly on the invite list for the upcoming tech policy summit with Trump. Although the jab thrown by Trump at Zuckerberg in the aforementioned tweet is certainly personal, there are indications that Zuckerberg hasn’t ruled out the possibility of working with the Trump administration. Zuckerberg has good reason to be cozy with Trump, particularly given that Peter Thiel is a Facebook board member who has earned a spot on Trump’s transition team. Zuckerberg has even come out in defense of Thiel’s support of Trump in an internal Facebook memo leaked by Business Insider in October of this year. Zuckerberg’s memo read in part:

We can’t create a culture that says it cares about diversity and then excludes almost half the country because they back a political candidate. There are many reasons a person might support Trump that do not involve racism, sexism, xenophobia or accepting sexual assault. It may be they believe strongly in smaller government, a different tax policy, health care system, religious issues, gun rights or any other issue where he disagrees with Hillary.

In fact, despite Zuckerberg’s apparent absence from the upcoming Trump tech summit, it appears that he’s willing to engage the Trump Administration in order to take on a role in government away from his business activities in the tech sector. On December 8th, Bloomberg reported on court documents filed in April of this year involving allegations that Zuckerberg manipulated a shareholder vote with the help of venture capitalist Marc Andreesen, a member of a special committee meant to promote the interests of minority shareholders. Zuckerberg won a bid to maintain his voting control of Facebook while also being able to sell his stock in the company; investor lawsuits allege that Andreesen fed information to Zuckerberg via text so that Zuckerberg could present his argument more favorably. Interestingly, the court filings include text messages sent between Andreesen and Erskine Bowles, another member of the minority shareholder special committee, which speak to Zuckerberg’s desire to be able to maintain control of Facebook while possibly serving two years in government.

Much of these discussions happened in late 2015, when the prevailing opinion on the U.S. presidential campaign was much different than the reality we’re experiencing today. But the fact that Zuckerberg is open to serving in government might actually carry some sway with the Trump transition team, which includes a Facebook connection through Peter Thiel. The question of where exactly Zuckerberg would want to serve, however, is open for fresh debate.

Given Zuckerberg’s stances on Internet issues, one possible position for Zuckerberg could be at the U.S. Federal Communications Commission (FCC). Recent media reports indicate that a position on the FCC’s board of commissioners could be opening up thanks to the recent adjournment of the U.S. Senate without voting on extending the FCC term of Commissioner Jessica Rosenworcel. Given media reports that Thiel has been working to get close allies of his into important positions in the Trump transition team, as well as both the U.S. Department of Commerce and the U.S. Food and Drug Administration, it’s not unthinkable that Zuckerberg’s relationship with Thiel could result in the Facebook CEO taking on a large role at the federal agency that has recently been increasing its regulatory control over Internet services.

Zuckerberg holds a fairly magnanimous view on free speech, given media reports of his decision last December to not censor public posts made by Donald Trump despite calls to do so internally within Facebook. Zuckerberg’s views on the democratic nature of Internet content could make him useful to the FCC, which is barred by law from preventing the broadcast of extreme points of view despite the agency’s ability to restrict when indecent, profane or obscene material can be broadcast.

There are other areas of FCC regulatory purview, however, where a Zuckerberg appointment could cause some interesting shifts. One area that could see some intense focus is net neutrality, a set of rules going into effect in February 2015 through the FCC’s Open Internet Order backed both by FCC Chairman Tom Wheeler and the Obama Administration. These rules reclassified Internet service providers (ISPs) as Title II common carriers, removing them from the U.S. Federal Trade Commission’s regulatory authority and placing them under FCC control. Zuckerberg doesn’t appear to have been outspoken about U.S. activities in net neutrality but Facebook’s activities in other countries has been rebuffed by those who claim the company engages in violations of net neutrality. In India, for example, the government’s telecommunications regulator banned Facebook’s Free Basics program, which sought to bring free Internet services to low-income areas of India and other developing countries, for violating net neutrality. Of great concern was the fact that Free Basics offers free access to partner apps which steer users away from homegrown Indian Internet services. In a Facebook post on India’s ban of Free Basics, Zuckerberg said he was “disappointed” with the government’s decision but that Facebook would continue with efforts to “break down barriers to connectivity in India and around the world.” There are reports of a growing tide of opinion against net neutrality in the FCC itself, especially if Wheeler steps down as FCC Chairman under the Trump administration.

There’s no clear indication that Zuckerberg is a lock for, or even considering a post with, the FCC. However, he is interested in leaving himself available for a possible governmental appointment and his ties to Thiel pose some interesting opportunities. The appointment of Zuckerberg to the FCC, however, could go a long way in overturning net neutrality rules that limit Internet service opportunities for the American consumer and have been choking the profitability of ISP business models through rulemaking like the recent broadband privacy guidelines which impact how ISPs can use consumer data.