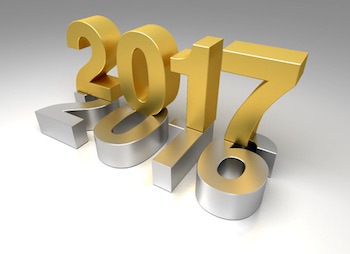 It is that time once again when we look back on the previous year in preparation to close the final chapter on 2016 and to look ahead toward 2017. With this in mind, on December 15, 2016, at 2pm ET, we will be hosting a free one-hour webinar conversation that takes a look back on the most important and influential moments of 2016, and a look ahead to the issues that we believe will shape 2017. CLICK HERE to register.

I will moderate this discussion. Joining me will be Q. Todd Dickinson (former USPTO Director and partner at Polsinelli) and Peter Harter (former director of global government relations for Netscape and founder of The Farrington Group).

In addition to taking as many questions from the audience as possible, we will specifically discuss:

With patent reform surprisingly stalled, the biggest news stories of the year may have been the Patent Trial and Appeal Board (PTAB). The Supreme Court decided the much anticipated case of Cuozzo Speed Technologies v. Lee, siding with the Patent Office interpretation of the America Invents Act (AIA), and for much of the year the Federal Circuit continued to rubber stamp PTAB decisions and procedure. Then something curious started happing shortly after the Supreme Court decision in Cuozzo. Beginning in late summer 2016 the Federal Circuit started to push back rather dramatically on the PTAB, finding PTAB actions arbitrary and capricious, and recently finding that the PTAB instituted covered business method (CBM) proceedings using a definition that would make practically every patent a CBM patent.

Additionally, also recently, Judges O’Malley and Taranto used concurring opinions to call for the Federal Circuit to en banc review whether a decision to institute an IPR proceeding is non-appealable. Indeed, both O’Malley and Taranto believe that the Supreme Court’s decision in Cuozzo called into question the Federal Circuit’s reasoning in previous cases finding institutions decisions unreviewable. In fact, Judge O’Malley wrote that if the PTAB exceeds its authority to institute it would e a proper role for an appellate court to step in, as suggested by the Supreme Court in Cuozzo

The Federal Circuit also agreed to hear Aqua Products en banc in order to decide whether it is appropriate for the patent owner to carry to burden of persuasion for motions to amend during an inter partes review (IPR), and whether the PTAB can sua sponte raise challenges to patentability not asserted in an IPR petition. Thus, as 2016 started and through at least the first half of 2016 it seemed as if the PTAB had become rather all-powerful and completely unsusceptible to judicial restraints. As we close 2016 and look forward to 2017 a decidedly different picture seems like it is emerging.

The other big news story of 2016 was with respect to patent eligibility. Up until May 2016, the Federal Circuit had decided exactly one case in the nearly two years since Alice that found software patent claims patent eligible. That case was DDR Holdings. Hope was being to fade in the patentee community, but then a series of decisions by the Federal Circuit have started to provide meaningful insight into how software can be described so that it will be considered patent eligible. 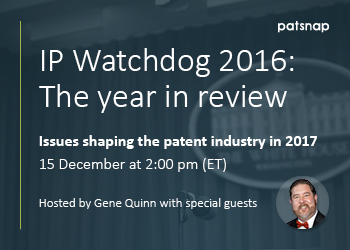 Over the last six months we have now seen Judges Moore, Taranto, Hughes, Chen, Newman, O’Malley, Reyna, Stoll, and Plager all sign on to decisions that found software patent claims to be patent eligible. That brings the total to nine (9) judges of the Federal Circuit indisputably in favor of patent eligibility for software in at least some instances over the last six months. Judge Wallach joined Judge Chen in the majority decision in DDR Holdings v. Hotels.com, so it would seem safe to say that he too remains in favor of patent eligibility in at least some cases, bringing the number to ten (10). Not on that list is Judge Linn, a former patent attorney, who has throughout his career has been one of the most forceful defenders of a strong patent system and the author of previous decisions finding software claims patent eligible, including the original panel decision in Alice. Thus, the number of Federal Circuit judges that would find at least some software patent claims to be eligible conservatively sits at eleven (11).

While predicting the future is always difficult even under the best of circumstances, the surprise election of Donald Trump has thrown the industry an enormous curveball. The industry knew a great deal about how Hillary Clinton would approach patents and innovation policy. Much less is known about how President Trump will approach those issues, and even who will be on his short list to run the United States Patent and Trademark Office.

Patent reform, which will almost certainly return in 2017 in some form, was never going to enjoy the same widespread support for an omnibus reform bill that it had during the Obama Administration. Other than billionaire PayPal co-founder Peter Thiel, President Elect Trump has no ties to Silicon Valley. Indeed, most of the Silicon Valley companies that have been the loudest supporters of patent reform over the years either backed Hillary Clinton, mocked Donald Trump or both. Thus, it is hard to see how or why patent reform would be a top priority for the Trump Administration, and by this time two years ago in the immediate aftermath of the 2014 midterm elections there were already promises from Republicans in both the House and Senate that patent reform would be a top priority, which of course never materialized.

Senator Chris Coons (D-DE) has previously submitted a bill that would bring pro-patent reforms to the PTAB. Even if that bill – the STRONG Patents Act – does not move forward we could still see reforms to the PTAB during 2017. Depending upon how the Federal Circuit decides Aqua Products, whether the Federal Circuit does take up reviewability of institution decisions en banc, and whether even more decisions of the PTAB are found to be arbitrary and capricious, regulatory reforms may become essential. Furthermore, depending upon who ultimately becomes Director of the USPTO, regulatory reforms could be quite significant and beneficial to patent owners.

Meanwhile, the big Supreme Court case that everyone is following pits Apple against Samsung, with the fight over damages relating to design patents.

The question before the Supreme Court relates to 35 U.S.C. 289 and whether it is appropriate to apportion damages under that statute. The statute is quite clear on the subject, and if the Supreme Court limits itself to the explicit wording of the statute apportionment would be inappropriate and Apple will hold on to the $400 million design patent infringement award. During oral arguments, however, many of the Justices seemed skeptical. Justice Kennedy even hinted at the possibility of a de minimus exception, which leaves many wonder whether the Supreme Court will judicially re-write the statute or use some other contrived judicial exception to significantly reduce Apple’s damage award.

Design patents have become increasingly important over the last decade as the standard for proving design patent infringement has veered toward the substantial observer test familiar in copyright litigation. This has lead many large corporations, such as automakers and shoe companies, like Nike, to generously file on new designs. Should the Supreme Court rule against Apple the decision would have far reaching implications well outside of this battle of smartphone giants.

The decision by the Supreme Court, which will be sometime before the end of the term in June 2017, with either validate the value of design patents or potentially make design patents virtually worthless.