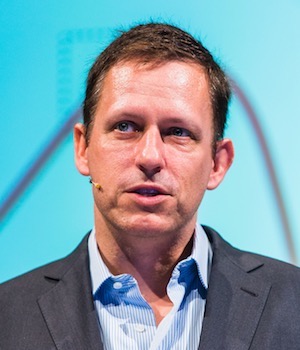 As the hours waned on the evening of Tuesday, November 8th, the United States went to sleep despite the seismic wave sent rumbling through the political world. Virtually no one predicted that Donal Trump would prevail, which meant few had seriously considered what a Trump Administration might look like, who might formally and informally advise a President Trump, who might be nominated to the thousands of positions that will soon become open, what his agenda might be and where his priorities would lie.

Since the morning of November 9, individuals from virtually every industry have been asking questions, seeking insights and wondering what a Trump Administration will mean not only for the country, but for their specific interests.

Although the tech industry is big in America, the industry itself was not big on the idea of a Trump presidency. Trump, however, did have one very vocal supporter from the tech community: German-American entrepreneur, billionaire venture capitalist and PayPal co-founder Peter Thiel. About week before the presidential election, Thiel made a speech to the National Press Club in which he defended his support for Trump as a presidential candidate: “It’s not a lack of judgment that leads Americans to vote for Trump; we’re voting for Trump because we judge the leadership of our country to have failed.” This summer, Thiel also made a speech supporting Trump at the Republican National Convention, where Trump was named as the Republican nominee for U.S. President.

Thiel’s position within the Trump Administration has further solidified with the announcement on November 11th that Thiel will be joining the transition team for the president-elect. Being perhaps the only Silicon Valley voice within the Trump camp, Thiel’s views could very well affect how Trump considers matters of innovation policy, including patent reform, which has simmered on Capitol Hill for much of the last decade.

There is little in the printed record which allows us to parse Thiel’s views on patents. In September 2014, The Wall Street Journal published an excerpt from Zero to One, Thiel’s book on business startups, which makes one mention of patents. It seems fair to conclude that, while Thiel doesn’t seem to be vocal about patents themselves, he could be open to listening to arguments for respecting the rights of patent owners. “Creative monopolies aren’t just good for the rest of society; they’re powerful engines for making it better,” according to Thiel. Although he notes that it’s fair to question whether someone should receive a monopoly “simply for having been the first to think of something,” in the next breath he acknowledges that the type of monopoly afforded by a patent is not anathema to innovation: “Apple’s monopoly profits from designing, producing and marketing the iPhone were clearly the reward for creating greater abundance, not scarcity: Customers were happy to finally have the choice of paying high prices to get a smartphone that actually works.” The dynamic nature of Apple’s new monopoly on mobile devices was able to topple the old monopoly of desktop computing which was the rich province of Microsoft, IBM and others. Thiel reportedly echoed his sentiment that the U.S. system of intellectual property was one that rewarded innovation with monopoly during an October 2014 address at the University of Chicago Booth School of Business.

The use of the word “monopoly” to describe patents, or copyrights, is unfortunate. While the Supreme Court has historically used the word “monopoly” or the term “limited monopoly,” and those who oppose the patent system have long sought to tie patents to monopolies, a patent does not and never will confer a monopoly right.

Certainly there can be foundational technologies that are of extreme importance, but those types of inventions are rare.  Most inventions are improvements or incremental advances of different magnitudes. Furthermore, patent rights are fragile. When you have an innovation and you are making money basic laws of economics suggest that there will be others who will seek to enter your marketplace and compete, and they do.

Today giant tech corporations just engage in efficient infringement, which is a sanitized way to say they just steal the rights without paying, and others will engineer around your solution. So a patent does not guarantee you the right to a market, but rather gives ostensibly exclusive rights that need to be enforced by the owner. Unfortunately for patent owners the ability to enforce patents has continually eroded over the past decade as it has become easier to challenge patents in administrative proceedings, the Supreme Court has continued to render more and more patent ineligible, damages have evaporated and an open hostility toward patent owners and innovators has taken root and has been destroying the patent system.  See here, here, here, here, here, here, here and here.

At best a patent provides the potential to collect monopoly profits, but that rarely happens because of market entrants, market leaders failing to continue to innovate, and paradigm shifting innovation that can instantly make current technologies outdated. If you don’t believe me just ask Kodak. They invented the digital camera and now own virtually none of the marketshare. Kodak is not unique. Neither are disruptive technologies.

Thus, Thiel’s description of a patent as monopoly is a gross oversimplification and shows a fundamental misunderstanding about patents. What is interesting, however, is that in his Wall Street Journal essay, titled Competition is for Losers, he seems to suggest that it is perfectly appropriate, if not absolutely desirable or even necessary, for companies to identify a space where they can obtain a competitive advantage and exploit that advantage to the greatest extent possible. Thus, to the extent that he considers patents a monopoly this may not be troubling in the same way that so many others who have used the pejorative term have meant it to be in the past. Further, if Thiel can be persuaded that legislative patent system reform would hurt new monopolies in favor of old ones, a Trump Administration may decide that reforms that favor the entrenched would get in the way of a growing economy. Certainly the Trump Administration will owe no favors to the entrenched powers in Silicon Valley as did President Obama.

There might be other conclusions to draw on how Thiel could be persuaded to view patent-related issues based on his legal activities, specifically his bankrolling of Hulk Hogan’s lawsuit against the online news site Gawker. The case was a deeply personal cause for Thiel, who had personal information revealed by Gawker against his wishes. Much like in his support of President-elect Trump, Thiel took a highly principled stand, regardless of how those principles were viewed. In a New York Times’ DealBook article published this May, Thiel indicated that he was taking a moral stand on Gawker’s activities and was not simply looking for revenge. He acknowledged that others, not just Hulk Hogan and himself, had been victimized by Gawker’s successful model of “getting attention by bullying people even when there was no connection with the public interest.”

While Thiel’s grievance with Gawker is personal, and deals with privacy, it is hard not to notice in his comments the sounds of someone who is tired of bully tactics. Whether that would trickle down to innovators who are vilified and mocked as “patent trolls” remains to be seen because, like so many things in life the issue is complicated. There are certainly patent owners who have been guilty of abusing their power and attempting to bully others, including small businesses and individuals. But lumping all patent owners into one group and calling everyone a “patent troll” is simply not helpful, a conclusion recently reached by the Federal Trade Commission. Thiel has no reason to listen to the rest of Silicon Valley, and by and large he’s earned that right, so he could very likely be dubious of the “patent troll” debate. But where will he come down in the “patent troll” debate and how nuanced will his view of patents be?

There are inklings that the patent troll narrative might actually have sway with Thiel, despite his Silicon Valley outsider status. An article published in September 2014 by Bloomberg pertaining to a corporate restructuring of Intellectual Ventures (IV), a Patent Assertion Entity (PAE) often portrayed in the media as a patent troll, provides some clues. Thiel is quoted as saying: “I think IV is basically a parasitic tax on the tech industry.” That quote should give patent owners reason to worry as it reflects a revulsion to the commercialization and monetization of intellectual property. It also reflects the fact that people tend to like the law when it is on their side. As a tech investor, it’s highly likely that Thiel has experienced some form of patent litigation and it seems obvious that he or his companies have been approached by IV at some point in time to pay a license that he didn’t want to pay, or perhaps didn’t think he needed to pay.

At first glance Thiel’s comments about monopolies and competition being for losers and companies needing to find and exploit a competitive advantage are not easy to reconcile with calling IV a parasite. The way they could be reconciled, however, is by treating classes of patent owners differently based on whether they innovated and are an operating company seeking to exploit that innovation versus those who acquire patents. This differentiation is how at least some in the tech industry would like to define the issue, presumably because it would mean they could get and keep their own patents while preventing aggregators such as IV from acquiring and enforcing patents. This view, while perhaps appealing to some, becomes complicated when you try and figure out on which side Universities belong, as well as companies that engage in research and development as a business model and for the sole purpose of inventing and then licensing out to others.

As Trump’s top insider from the tech world, Thiel makes for a somewhat encouraging, albeit enigmatic figure for small players in the patent universe. By and large, the jury is still out on how he’ll affect the Trump Administration’s stance on patents. But it seems reasonable to assume that Thiel’s views while potentially favorable to some patent owners could well be quite unfavorable to others.