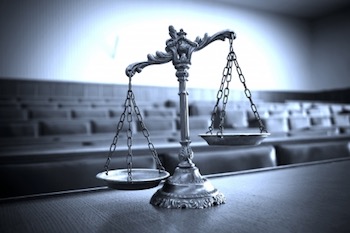 On October 11th, legal analytics firm Lex Machina released an intellectual property litigation report covering the third quarter of 2016. The report indicates that IP litigation in U.S. district courts is declining across the board, although the potential for volatility still exists in certain sectors thanks to some important players. 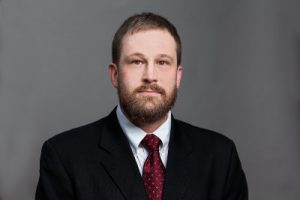 Given these facts, it’s fair to say that the most recent quarter continues a pattern of recent decline in patent infringement litigation according to Brian Howard, legal data scientist for Lex Machina. “It’s on the lower side, it’s a lot closer to 2014 than anything else,” Howard said. Looking at the first three quarters of each year going back to 2011, the patent infringement totals thus far through 2016 is less than 500 cases fewer than the 3,953 patent lawsuits filed in 2014. By contrast, 2015 saw 4,251 patent infringement cases through the first three quarters of that year and 2013 saw 4,602 such cases.

The 3,376 patent infringement cases filed through the first three quarters of 2016 is almost 1,000 cases more than the 2,484 infringement suits seen through the first three quarters of 2011. However, considering some of the provisions of the AIA, including a new plaintiff requirement that defendants be targeted by individual suits rather than one patent infringement suit listing multiple defendants, there’s some argument to make that we might be seeing a return to pre-AIA litigation levels. Howard noted that there were presumably some cases filed in 2011 that listed multiple defendants which would have to be filed individually post-AIA. “The data is consistent with the theory that we may be returning to pre-AIA levels but it doesn’t necessitate that you would come to that conclusion,” Howard said. 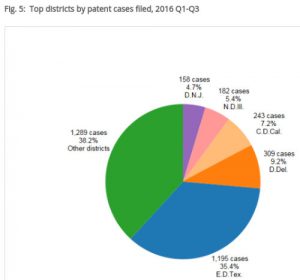 Lower levels of patent litigation mean smaller dockets across the board for district courts, including the U.S. District Court for the Eastern District of Texas (E.D. Tex.). However, the high concentration of patent infringement actions filed in E.D. Tex. still holds true through 2016’s third quarter. The recent Lex Machina IP litigation report shows that 35.4 percent of all patent infringement cases filed in the third quarter were filed in E.D. Tex. for a total of 1,195 patent suits. The venue with the next largest docket is the U.S. District Court for the District of Delaware (D. Del.), which accounted for 9.2 percent of the patent infringement suits filed during the quarter, a total of only 302 cases. Outside of the top five venues, all other U.S. district courts combined for a total of 1,289 cases, 38.2 percent of all patent infringement suits filed in the quarter. 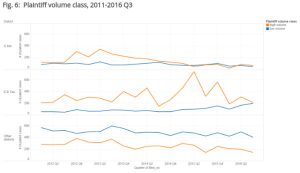 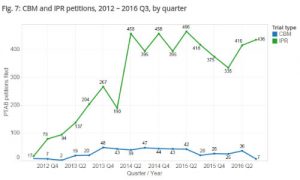 Over at the Patent Trial and Appeal Board (PTAB), it was business as usual during the third quarter in terms of inter partes review (IPR) filings. The 436 IPRs filed during the most recent quarter falls directly in the middle of the range of 395 IPR filings to 460 filings seen every quarter going back to the second quarter of 2014, notwithstanding two outliers in 2015’s fourth quarter and 2016’s first quarter. Covered business method (CBM) reviews, however, took a tumble down to only seven such cases filed during 2016’s third quarter. That was down from only 36 CBM filings in this year’s second quarter, however, and the number of CBM filings seen each quarter have not gone above 50 filings going back to 2012’s third quarter. “I don’t think that it’s the end of CBM until we see a couple of quarters like that,” Howard said. He added that PTAB was experiencing website issues during the recent quarter and wondered whether practitioners experienced disruption of online services which may have caused them to hold off on filing CBMs. 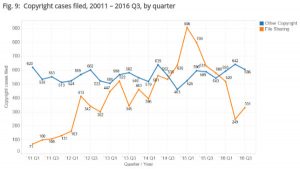 File sharing cases are typically brought by firms against John Doe defendants who are accused of illegally downloading content through BitTorrent or related technologies. The single largest filing party for these cases is Malibu Media, which filed 166 file sharing cases during the recent quarter. As has been reported here and elsewhere, Malibu Media is a developer of adult erotic films. Howard notes that while not all file sharing cases involve such content, about 80 to 90 percent of the cases are related to adult films. Interestingly, although Malibu Media seems to be fueling file sharing cases, its activities in filing copyright suits have tailed off dramatically since the second quarter of 2015, when the company filed 589 copyright infringement suits.

Although it’s a bit outside of the IP world’s purview, Lex Machina’s most recent litigation report is the first to include statistics on securities litigation. The 327 new case filings in the third quarter is the highest total of new securities litigation actions going back to 2009. Not surprisingly, the top venues include top U.S. cities for the financial industry, including the U.S. District Court for the Southern District of New York (S.D.N.Y.) and the U.S. District Court for the Central District of California (C.D. Cal.). The new securities report presages a number of new legal analytics categories to be offered by Lex Machina in the coming months, including antitrust, bankruptcy, product liability, employment and general commercial litigation.