Conversational Commerce: How Technology Raises the Bar for Customer Interaction 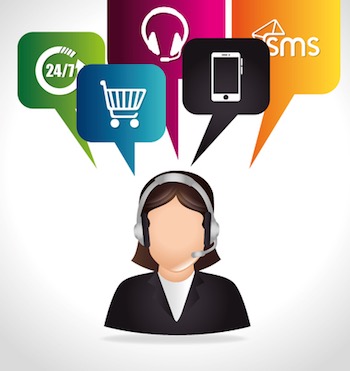 Prophetically, 2016 has been called the Year of Conversational Commerce. If that wasn’t attention-grabbing enough, it became official with the christening of the hashtag #ConvComm. That means customers don’t just buy things anymore. They want their commercial interactions to involve the human touch such as in the brick-and-mortar retail model.

Now with smartphones always-on and within reach 24/7, the way businesses need to communicate information to customers is through their mobile devices. And statistics show that the preferred method for reaching customers by their phones is via text message. For example, 70 percent of customers say texts are a good way to get their attention, and 90 percent of customers will open a text message within three minutes of receiving it, according to mobilesquared, an industry analysis firm.

Asynchronous/synchronous communications: The nature of text messages means that they can be sent at one point and received at a different point in time. For routine messages such as billing notifications by phone or cable companies, they can be read hours or even days later. Many consumers have auto payment, and these particular messages are just courtesy reminders. However, if someone’s credit card number is stolen and unauthorized charges made, banks will send fraud alerts in real time and consumers will want to respond ASAP!

Persistence or context: For conversations with airlines about flight reservations that’ve just been cancelled, travelers expect customer relations personnel to remember their itineraries if handed off to a different agent. And Gold Card loyalty program members definitely expect them to know that so they receive the expedited and deferential service for which they pay extra. The thing they do not want remains having to repeat these facts every time another touchpoint occurs.

Relationship-based hierarchy: Unlike email threads grouped by topics, text messages are organized by relationships. This has the side benefit of more or less ranking relationships in descending order of importance based on messaging frequency, which tends to move in tandem with sender closeness to their correspondents. All the conversations a sender has with a specific contact are grouped together. So a sender will never miss an important message from a company for whom she has been a good customer. And she’ll receive all the spiffs and electronic coupons to which she is entitled.

To implement these powerful benefits of Conversational Commerce, a range of mobile messaging tools remains necessary. No single tool will be best for every scenario. A figurative Swiss Army knife of mobile messaging tools must exist. Fortunately, a new breed of technology company provides communications APIs (application programming interfaces) which offer just such a range of tool functionalities.

And when it comes to mobile messaging, it means more than just SMS, the classic phone text. It also means push notifications, in-app chat and over-the-top (OTT) messaging apps. Each of these tools has a place in the texting-to-customer ecosystem.

SMS: The original form of text message, SMS is a great solution for asynchronous communications, such as dentist appointment reminders two weeks out and the day beforehand. And when necessary, it can also be a very powerful synchronous communications solution for scenarios like credit card fraud alerts. SMS has the advantage of being ubiquitous on nearly every smartphone. However, it’s also the most costly, because it’s still billed on a per-message basis by some carriers.

Push notifications: Used in conjunction with SMS, push notifications are initiated by the company and sent to the customer without any action being taken on her part. For example, an auto parts store, pharmacy or florist may send out push notifications, when opted in and activated, alerting the customer to sales, prescription refills or reminders about holidays when flowers are appropriate.

In-app chat: For companies that provide a large component of customer support as part of their solution, an in-app chat function can prove very engaging. For example, Nordstrom, a leading luxury department store, has a dedicated application for shopping on mobile featuring an in-app chat function with stylists or personal shoppers, which can allow the customer to obtain extremely personalized information in order to evaluate a purchase. Personal shoppers can send images of clothes to early adopter patrons interested in obtaining the latest fashions before they become overly popular.

Over-the-top (OTT) messaging apps: While primordial in the B2C space at this time, OTT apps like Snapchat, WhatsApp and Facebook Messenger have made announcements that they will begin to enter the commercial B2B sphere. Already, WeChat and Line in Asia are communicating with customers with one-to-one marketing messages, thus, enabling extreme personalization of the customer experience. WeChat also has a payment service for mobile commerce.

The only problem with implementing mobile messaging is that communications application developers at many businesses have already invested resources in the form of time and budget commitments into their codebases for programming and infrastructure. The last thing they need to do is reinvent the wheel and create standalone mobile messaging apps.

And the reality is that customers only access dedicated messaging apps a few times a year—if at all. That’s where the communications API providers come in. Some of the leading providers are outlined below.

Twilio offers a toolbox of API cloud building blocks that allows developers to introduce messaging into the existing infrastructure. According to information from the company, no forklift upgrade is necessary of what’s already there, which would force a restart from scratch.

Its APIs form the building blocks, enabling developers to connect their existing infrastructure and applications to messaging tools that reach customers the way they want to be reached. They work with extant workflows seamlessly in order to send customers the right message in the right context in the right mode at the right time, according to Twilio. With this new approach, developers can fix the broken communications process to engage the customer more effectively and sustain and increase business, according to the company. All four major mobile messaging methodologies receive support from Twilio.

Nexmo: Because Every Message Matters

Nexmo, part of phone company Vonage, has two API tools that enable communications developers to build mobile messaging into existing infrastructure. With its SMS API solution, businesses can attach their mobile messaging infrastructure directly to carrier networks worldwide, according to Nexmo. For example, online marketplace, Alibaba, relies on Nexmo’s SMS services to keep customers up to date with the latest perks and offers as well as enhance security and give customers peace of mind.

In addition, Nexmo has an API that allows businesses to connect their mobile messaging infrastructure directly to Facebook Messenger, WeChat, Viber and other leading consumer chat applications, according to the company. B2C brands such as KLM and Suitsupply use the chat API to reach their customers as well as leading B2B companies like SAP, Salesforce and Marketo.

A smaller player in the mobile messaging arena, Plivo only participates in the SMS segment currently. Its largest advantage over Twilio and Nexmo is that all inbound SMS messages from customers to the business communications infrastructure are free. And according to third-party website Juggernaut, its outgoing rate for SMS messages is up to 54 percent less.

Another advantage it has is the ability to automatically link messages longer than 160 characters into a single text—up to 1600 characters long—seamlessly on the user end, according to Plivo. That way there are no more lost messages or manual chunking of SMSes, according to the company. Leading Plivo customers include Netflix and Mozilla of Firefox browser fame.