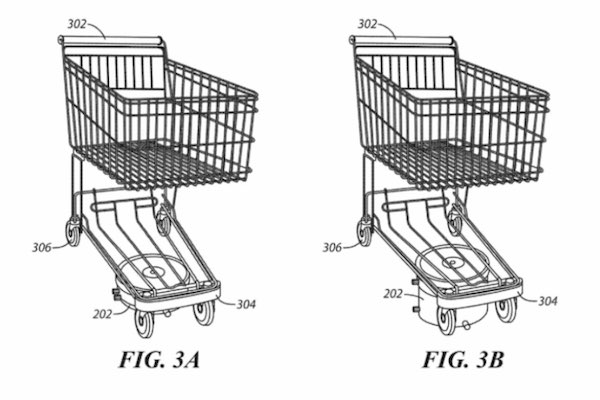 FIGS. 3A and 3B are illustrations of the motorized transport unit of FIGS. 2A and 2B detachably coupling to a movable item container, such as a shopping cart, in accordance with some embodiments;

On an increasing basis, we are hearing of many different companies, not typically associated with motor vehicles, getting involved in the technology of Autonomous vehicles or Self-Driving Cars.  Companies such as Google, and Apple, have recently been granted patents on different technologies associated with Autonomous vehicles.  So I was not surprised to see that one of the largest retailers in the world, is also jumping on that band wagon.  In a Google Alert email I have set up for Patents, the top article of the day yesterday was by DigitalTrends, which reported that Walmart was granted a patent that could bring self-driving shopping carts to its stores.

Although news sources are incorrectly reporting that the patent has issued, the USPTO did, in fact, publish Walmart’s US Patent Application 2016/0260161 for a Shopping Facility Assistance  Systems, Devices and Methods on September 8, 2106.  In other words, Self-Driving Shopping Carts. According to the patent application, the system will utilize a series of docking stations, sensors, motors and cameras to offer consumers the ability to “hail” a shopping cart using an app on their smartphones, much like they would a taxi or Uber and that upon completion of use, the system will somehow be able to recognize abandoned carts within the store or in the parking lot and will be able to manually return itself to a docking station for use by another consumer.

The invention is not in and of itself a new kind of shopping cart.  In fact, shopping carts will not change at all.  Rather, there will be small Roomba-like motors that will actually connect to the bottom of the cart and move it from place to place.

FIGS. 2A and 2B are illustrations of a motorized transport unit of the system of FIG. 1 in a retracted orientation and an extended orientation in accordance with some embodiments;

The first claim of the published patent application is as follows:

This seems like something that could be quite handy and would allow for more employees to be available to assist consumers throughout the store.  However, there are some questions that come to mind and are hopefully being addressed by the Inventors at Walmart:

How Will Technology Impact Jobs

One of the things that seems to be a huge question on the mind’s of many is how will these types of technological advances impact jobs.  Many people automatically, and incorrectly, assume is that Technological advances will have a negative impact on jobs across the world.  In fact, Digital Trends mentioned in their article that Walmart is cutting 7,000 jobs due to Automation.  And in another article on their website, they also report that Robots are expected to replace some 5 Million Jobs by 2020.  However, that is a gross oversimplification of how technology is impacting jobs.  Yes, robotics and technology such as Self Driving Shopping Cars may have a negative impact on a few low paying jobs such as those who retrieve carts at Walmart.  But what is not being reported enough, are the tens of thousands of jobs being created during the invention, implementation and maintenance stages of such technology.

Earlier this year, Fortune Magazine posted an article titled 25 Million New Jobs Coming to America, Thanks to Technology.  The article explains that technology has 3 major impacts on jobs; 1.  Technology has lead to many more companies, including old line manufacturers, to now offer services that support those new technologies as they become available in the mainstream; 2.  Technology such as driverless cars and wearable devices continue to lead to a larger need for new networks of people to handle the sensor data from these devices’ 3.  There has been a surge in data analytics due to the “rapid development and deployment of software and applications.”

So back to our Driverless Carts, even if every Walmart in America has 10 jobs dedicated to the retrieval of carts who could potentially loose their jobs because of technology such as Self-Driving Shopping Carts, there are so many other, higher paying jobs that are being created in order to develop and manufacture such technology, not to mention those who are employed to install, maintain, repair and improve such technologies. So while political leaders should look for solutions to help dislocated workers adapt to a higher tech economy, focusing on the loss of a few jobs misses the bigger picture.