How the Patent Trial and Appeal Board Harms Inventors 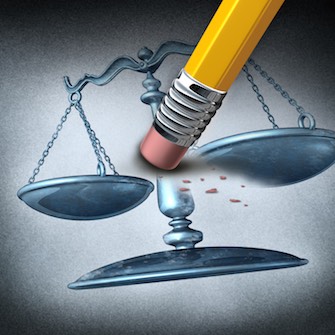 Today, any patent can be challenged to a PTAB procedure by anyone at almost any time, which dramatically harms inventors. The more valuable the invention, the higher the risk of a PTAB.   Inventors cannot adjust their own behavior to reduce the risk of a PTAB being launched. That risk remains as long as the patent is in effect. Since most PTAB procedures are launched against patents being enforced against large multinational infringers, the only behavioral change an inventor can make is to not enforce patent rights even if a large multinational corporation steals the invention. Perhaps that is the point of the AIA.

Despite the plain words of the U.S. government on every patent stating that “…requirements of law have been complied with” and the fact that the inventor has likely spent many years (in some cases well over a decade) along with tens of thousands of dollars proving to the Patent and Trademark Office (PTO) that the invention is worthy of a presumed valid patent, once a PTAB is instituted the inventor must reprove that the patent is valid all over again. And they must reprove it to the very same government body that issued it in the first place and affixed the seal and promise of the United States government. This absurdity should not go unnoticed.

The AIA reversed that. Today, a challenger can submit a petition for a PTAB and if the PTO accepts the challenge, the inventor gets hit with costs averaging more than $300,000. Depending on how many patents are challenged, how many challengers, and how litigious the challengers are, costs can exceed a million dollars. There are not many inventors with a million or so of loose cash just laying around to pay for this and investors have largely left the patent business, so for most inventors cost alone is an insurmountable burden forcing capitulation to infringers or abandonment of the patent.

PTAB procedures have rendered worthless around 90% of the patents they see by either invalidating the patent altogether or invalidating the most critical claims. The infringer lobby and the PTO would have us believe that is not the case, but they measure total claims in all challenged patents against total claims invalidated. They ignore that a petitioner selects specific claims and those selected claims are the most critical to the defense of the patent right. This means there is a deliberate, thoughtful and strong selection bias on which claims are challenged and only the most critical are challenged. The strength of most patents hinges on only a couple of the claims so patents with dozens of claims can be rendered worthless by invalidating only one or two claims. Thus invalidating only one claim can doom the entire case and set the infringer free. The PTO’s numbers are either produced with no knowledge of patent litigation or are deliberately misleading. See Misleading PTO statistics hide a hopelessly broken PTAB.

The AIA promised 400,000 jobs. I suspect it did the opposite in spades, however it did bring about the birth of two new industries. Each of these industries generates their profit by attacking patents to PTAB procedures. In one business model, third party companies challenge patents infringed upon by the large multinational companies (the same multinationals that funded the company challenging the patent) for the purpose of harassing the inventor or patent holder and beating them into submission. A second AIA created business model shorts pharmaceutical company stocks and then challenges key patents of the shorted company to PTAB procedures in an effort to drive the stock price down. If the challenge is instituted, stock prices drop sometimes by 25%, pumping millions of dollars into the company that shorted the stock and challenged the patent. Both of these business models contribute to the collapse of patent values and the resulting collapse of the patent system for inventors.

The real damage to inventors is the crashed value of the patent asset as it related to funding their company to commercialize the invention. A patent, a transferable private property right, once attracted investment from angel investors at the earliest high-risk stages of commercialization. It no longer does. This is because if the invested company fails, the patent is transferred to the investor and that investor must accept all of the risk that the AIA created. A patent could impose hundreds of thousands of dollars of costs and tie the investor up in litigation for years, and just like the inventor, the investor can do nothing to avoid that risk. For the most part, the patent cannot be sold unless the investor can bundle it into a larger portfolio. If the patented invention has the legs to make a market, investors are more likely to end up owning the stinky patents of a doomed company because it is more likely to be run out of business by infringement from larger competitors. And why not just steal it? There are few disincentives to stealing patents so if there is money in the patented invention, it will be stolen. The perverse reality of the AIA means it is better to invest in the company that steals the patent than it is to invest in the company that invents it.

Even Congress seems to understand the extreme weakness of the U.S. patent system today, having just this year passed federal trade secret legislation for the first time ever. For 220 years the U.S. patent system encouraged inventors to disclose their inventions in exchange for exclusive rights so that society could benefit from the knowledge and the public could freely use those inventions after a short time of exclusivity had passed. Today, as the patent system continues to weaken, those remaining in the innovation business have the exact opposite incentives – keep everything a secret for as long as you possibly can because the prospect of patent rights is at best an illusion and at worst a path to the poor house.

Of course, even as incentives to keep innovations secret work their way into the law and independent inventors are suffering, the PTO just doesn’t understand, or chooses to remain blissfully ignorant. Case in point, a friend forwarded an invitation from the PTO to celebrate the five-year anniversary of the AIA. The first two lines state in Orwellian fashion: “Five years ago, President Obama signed the Leahy-Smith America Invents Act (AIA) into law to modernize the U.S. patent system and strengthen America’s competitiveness in the global economy. Together, we have worked to improve our nation’s intellectual property landscape to ensure that America remains the hub for the brightest ideas and most ambitious endeavors in the world.”

Not so surprisingly, I was not invited. I suspect few inventors will be celebrating with them.