The IoT : A Look at the IP Landscape of Fitness Wearables

Within the Internet of Things (IoT), The Fitness Wearables segment of the Internet of Things (IoT) is one of the markets that has demonstrated strong growth and those analysts believe will continue to grow in the short term. In the fourth quarter of 2015, the worldwide wearable device market took a big step forward primarily led by the growing popularity of fitness trackers and the Apple Watch.

According to the International Data Corporation, vendors shipped a total of 78.1 million units in 2015, an increase of 171.6% over 2014. The company found that wearables can exist and are welcome in the mass market, leaving substantial room for growth in multiple areas including new vendors, form factors, applications, and uses. Their analysts forecast that in addition to tracking information like steps taken and calories burned, fitness wearables will include predictive information that suggest ways users can lead healthier lives, integrate with popular applications and social media, and embrace new form factors like clothing, footwear and eyewear. This not only will drive market growth but expand the fitness wearables patent landscape. There are several companies that share the majority of the revenue in the fitness wearable market, with  Fitbit being the worldwide leader along with Apple, Xiami, Samsung, Garmin, Nike, Sony, and Google.

Gartner lists six companies that share the majority of the revenue in the fitness wearable market: Samsung, Nike, Garmin,  Fitbit, Sony, and Google. To create patent analysis models, the technologies of the products made by these companies were considered, characterized, and refined by applying a set of about 100 keyword phrases to the patent portfolios. These refined keywords were applied to all US patents, to determine what other companies may have patents that are applicable to these products and services. Over 300 companies were considered. The results for a selection of these companies are shown below with the six leading companies in bold and medical companies listed in red. 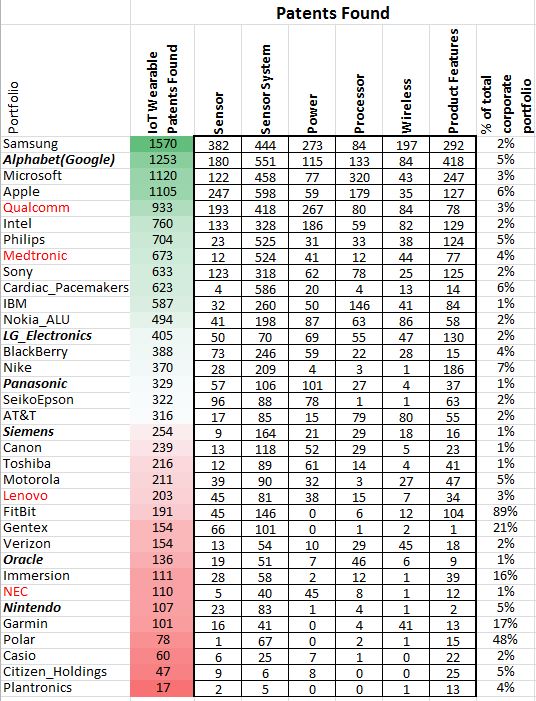 Figure 3, Snapshot of Technology Patents and Applications in the Fitness Wearables Market

Near the top of the list we find several older established companies (Samsung, Microsoft, Apple, Qualcomm, Intel and Philips) that have diversified into wearables. The top six wearables companies here range from diversifying companies like Google, Samsung, and Sony, a diverse apparel company Nike, and focused wearable companies Garmin and particularly  Fitbit. The focused wearable companies tend to be at the bottom of the list, where a larger percentage of their portfolio applies to the wearable market. Finally, the patents found for power, processor, and wireless are more about using and integrating these technologies, rather than fundamentally building them.

How recent are the applications and patents found in the patent study?

Histograms of the age of these patents bear out further observations (Figure 4). Most clearly, the rate of innovation in sensor systems is growing both in terms of applications and allowed patents. Sensors are not simply a clever component that senses the environment. Increasingly today they are systems combining several sensors for different environmental aspects into a microcontroller and analog to digital converter to provide a digital output.

In 2015, the wearables segment was dominated by smart watches, fitness bands, smart glasses and Bluetooth headsets. The total 2016 market for this segment is estimated to be $28.7 billion US dollars. The growth of innovation in sensor systems, and the current level of market revenue suggest that we are still a year or two away from the first licensing cycle in wearables market.

Recently, we tore down 12 wearable products. We discovered socket wins for 41 companies led by Texas Instruments (41), STM (11), and Qualcomm (7). Sensor wins were led by STM, Samsung, and nine others while sensor systems were led by AKM, Texas Instruments (TI), Invensense, and four others. TI, Maxim, and 10 others led the use of power management devices, processors were led by TI, STM, and 13 others, radios were led by Nordic, Broadcom, TI, and six others and other functions were delivered by 16 different companies.

The diversity of technologies, the innovations in low power and analytics and the wealth of established technology that is being repurposed for this market indicates that there will be strong licensing positions held by a wide assortment of well established companies. Companies entering the market will have to prepare for licensing by driving their rate of patent applications, purchasing patents, taking licenses or being acquired as part of a round of market consolidation.

The companies examined in the initial patent study fall into several groups regarding their position in the market and licensing positions. Newer companies like  Fitbit and Garmin, which are successful in the wearables market are just starting to build their portfolios. Others, like Nike and Google, are successful in other markets and have diversified into the wearables market.

Using Our Patent Analytics solution powered by KMX, we visualized the patent diversity for group of these patents. Each dot represents a patent, a group of patents sharing similar keywords creates a peak, and each peak indicates the top three keywords found in patent cluster. Patent clusters that are significantly different are further apart and may be separated by white space.

We developed models that separate patents into four areas based on the type of analysis required to prove the claim.

In the following landscapes, patents applicable to wearables are painted black, and are similar to one or more of our models for sensor, sensor systems, power, process, radio, and product features.

A Closer Look At  Fitbit

Consider  Fitbit (Figure 5). Their portfolio is relatively new with 81 US applications, 69 recent granted patents, and eight design patents. The structure of the portfolio appears to be centered on notifications, with four branches related to the monitoring fitness and activity, geo-location, heart rate, and biometrics in a portable fashion.  As an example, the top 15 keywords among many for peak “coupon apparatus page” are shown.

About 58% of the portfolio is found to be similar to our six models for wearables. This is a high percentage, suggesting that this is the primary market for  Fitbit. Most  Fitbit patents are systems related; perhaps only a handful are strongly circuit in nature. This implies that  Fitbit is an integrator, combining its own building blocks or those from other companies to create a higher value end product.

Fitbit may be in a good position for licensing negotiations, as their portfolio of recent systems patents may patent high-level value features of the recent innovations marketed in this wave of wearable products. 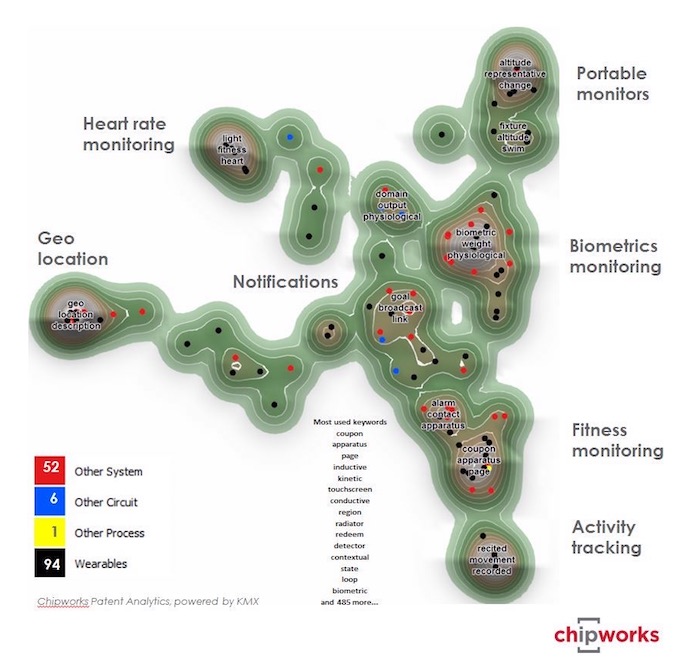 A Closer Look at Microsoft

Microsoft’s portfolio consists of 8,696 applications, 25,677 patents, and 3,692 design patents. Their portfolio consists mostly of software patents, with about 300 patents that are circuit related that are likely related to their Xbox gaming system, which includes Kinect and handheld peripherals. About 962 Microsoft patents are similar to the six wearables models in the initial study.  These patents are painted black in the full portfolio on the bottom left of Figure 8, are widely distributed. This suggests these patents are diverse in technology and may cover a broad range of technologies in wearables products.

A landscape was created of only the 962 patents found to be potentially applicable to wearables, in the right half of Figure 8. The top right area generally surrounding and above peak “image motion point” is about sensors and sensor systems, and many of the product features of Things. The left side around peak “event query search” combines sensor systems and processing. The bottom area, generally around and below peak “message activity service,” describe interactions of communication, wireless, and power.

Considering that Microsoft also has a very wide range of other technologies innovations patented, they would have the best position leveraging the wearables market among all companies considered in this study. 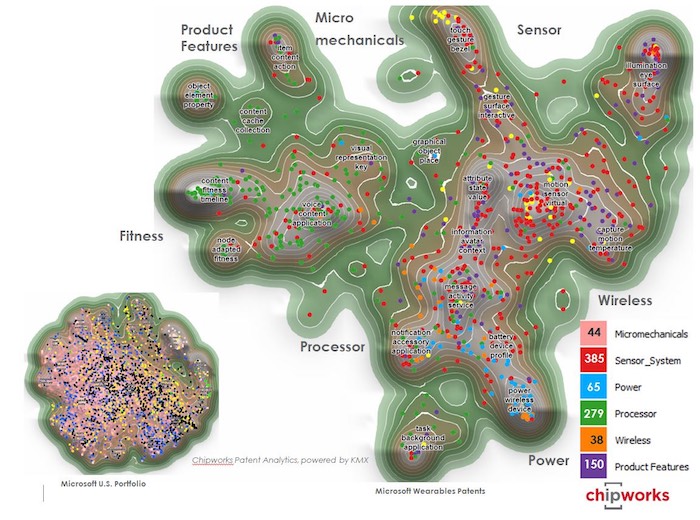 Many companies new to the IoT market may have strong and expansive portfolio positions for assertion. Even so, understanding the market players, their experience, and their patents in similar products is vital in creating a product and IP strategy that can deliver a high return in the IoT market.

is the President of Chipworks. Her extensive knowledge of technology products and strategic issues involving intellectual property has enabled her to provide invaluable insight and guidance to Chipworks’ customers. A [...see more]

is Director, IP Products at TechInsights where he is responsible for ensuring customers find and receive the highest value products and services from the firm’s intellectual property business units. TechInsights [...see more]