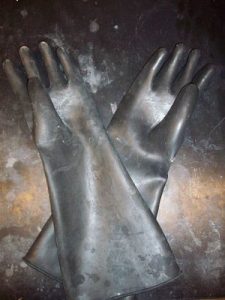 The synthetic material known as butyl rubber has applications in a variety of industries important to the U.S. economy. In automobiles, butyl rubber can be found in tire inner tubes as well as the many hoses and gaskets connecting the car’s propulsion system. Butyl rubber tires can also be found on bicycles and industrial vehicles alike. The synthetic material, a copolymer of isobutylene with isoprene, is used in weather-resistant asphalts, chemically-resistant pharmaceutical seals and electronics packaging. Low levels of unsaturation between polyisobutylene segments give butyl rubber its high impermeability and flexibility qualities.

This Monday, August 22nd marks the 72nd anniversary of the patent issue date for the seminal patent in butyl rubber production. This year, the National Inventors Hall of Fame decided to honor both William Sparks and Robert Thomas, the co-inventors of butyl rubber, by inducting them into the hall. From its wartime success to its proliferation across industries, butyl rubber may not have garnered much mainstream attention even though many types of businesses would be in dire straits.

The Search for Synthetic Alternatives to Rubber Begins in the 1800s

During the 19th century, rubber became a prized material as a result of the spread of the Industrial Revolution. The waterproof and flexible characteristics of rubber was used to produce pencil erasers, footwear, fabrics and other products. Charles Goodyear’s discovery of the vulcanization process for rubber in 1839 allowed manufacturers to work with rubber latex which had much higher stability in response to temperature changes.

Demand for rubber had increased to the point that it created late-19th century social and economic upheaval in the Amazon region of South America, which was a very active region for rubber latex production. However, the demand for rubber was outpacing production by the early 20th century and the material was becoming expensive. In 1906, global production of natural rubber exceeded 60,000 tons.

Around that time, the German chemical and pharmaceutical company Bayer offered a money reward to any of its engineers who could develop a cost-effective synthetic substitute for rubber. Bayer chemist Fritz Hofmann and his colleague Carl Coutelle developed a bulk polymerization process for creating polymerized isoprene for synthetic rubber production. The work of that pair is reflected in U.S. Patent No. 1062913, titled Caoutchouc Substance and Process of Making the Same and issued in May 1913. It claimed the process of producing a caoutchouc-like substance which involved polymerizing a mixture of substituted erythrene hydrocarbons. Caoutchouc is another term for natural rubber which isn’t in widespread use today. The use of mixtures of erythrene hydrocarbon variants in the polymerization process resulted in new rubber-like products which could be “advantageously produced.”

Another step in the direction towards commercially successful synthetic rubbers comes in 1930 at the research laboratories of American chemical developer DuPont. That year, Dupont engineers using scientific research espoused by Father Julius Nieuwland of the University of Notre Dame made the world’s first batch of polychloroprene, a synthetic rubber with high resistance to degradation. The discovery was accidental as a chemist tasked with creating a pure sample of divinylacetylene, the compound which was the focus of Nieuwland’s work, set aside an unknown liquid which was a byproduct of distillation processes. After a few days, the liquid congealed into a synthetic rubber that came be to known as Neoprene, a synthetic rubber which DuPont continued to produce until it sold that division in 2014.

Butyl Rubber Becomes a Wartime Winner for the United States

Research initiatives for the development of synthetic rubber would pick up through the 1920s as export restrictions affected the price of natural rubber in global supply. In 1931, Germany-based chemical developer IG Farben created the world’s first polyisobutylene, a homopolymer of isobutylene, a monomer which was first discovered more than a century earlier by famed English chemist and physicist Michael Faraday. This material has been used as a base for chewing gum, roofing, optical fiber protection and sealants.

The production processes for polyisobutylene found their way over to the Standard Oil Company, which marketed the chemical as Vistanex. It was at this company that the work of Sparks and Thomas would result in the production of butyl rubber. According to their National Inventors Hall of Fame entries, the research pair mixed Vistanex with a small amount of butadiene, another monomer used in the production of synthetic rubber, in a washing machine. When the spin cycle concluded, Sparks and Thomas were left with the first batch of butyl rubber which the world has ever seen.

The patent listed along with Sparks and Thomas in the Hall of Fame is U.S. Patent No. 2356128, entitled Mixed Olefinic Polymerization Process and Product. It disclosed a process for preparing a solid plastic hydrocarbon interpolymer by reacting a large amount of an aliphatic isoolefin with a minor amount of a conjugated aliphatic diolefin in the presence of a polymerization catalyst including aluminum chloride dissolved in a solvent. The resulting polymeric material exhibited high tensile strength, a large general inertness to chemical reactions and a high resistance to solvents.

Compared to other synthetic rubbers, butyl rubber offered a similar strength and flexibility to natural rubber. It could be used in low-temperature settings without cracking and its high impermeability to air and gases made it a good solution as an airtight sealant.

Butyl and other synthetic rubbers played an important role in the United States’ involvement in World War II. Much of the world’s supply of natural rubber was controlled by the enemy Axis nations and rubber was needed for vehicle production. In 1940, before the United States was involved in World War II, President Franklin D. Roosevelt declared rubber to be a “strategic and critical material” and created the Rubber Reserve Company for conserving rubber use at home and developing synthetic rubber production. An information sharing agreement amongst leading American rubber companies, including Standard Oil, Goodyear, Firestone and B.F. Goodrich, was created to kickstart synthetic rubber development. During WWII, butyl rubber earned the government codeword GR-I (Government Rubber – Isobutylene).

Butyl rubber continues to be heavily employed in manufacturing. Forecasts for total 2016 production indicated that 1.6 million tons of butyl rubber would be created this year. 60 percent of the global market is held by American oil and gas company ExxonMobil (NYSE:XOM). About three-quarters of all butyl rubber production is used for automotive production. Both Sparks and Thomas would go on to earn dozens of patents over the course of their career but the ubiquity of their butyl rubber invention in products made around the world has earned the duo some well-deserved recognition.