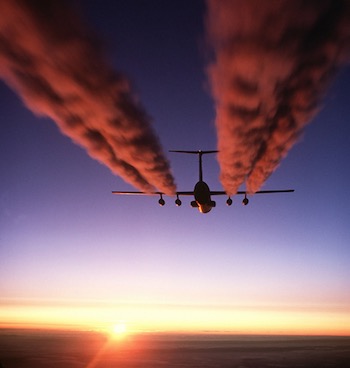 In late July, the U.S. Environmental Protection Agency (EPA) exercised authority it has under the Clean Air Act to begin the push towards regulating aircraft emissions. The agency issued an endangerment finding in response to a citizen petition filed by environmentalist groups which finds that emissions from aircraft, especially from large commercial jet engines, contribute to climate change and endanger the health of both the environment and the American public. Several pollutants contained within these emissions were cited including carbon dioxide, methane, hydrofluorocarbons (HFCs), perfluorocarbons (PFCs) and nitrous oxide.

The EPA noted that the agency is not issuing any rules regarding aircraft emissions along with this finding, although the endangerment finding is a first step on the way towards such rules. The agency did state that its regulations would be at least as stringent as carbon emission standards issued by the International Civil Aviation Organization (ICAO). This February, the ICAO’s carbon emission standards received a unanimous recommendation from the agency’s Committee on Aviation Environmental Protection (CAEP). The recommendation from this committee, which represents 170 nations, is another step towards adoption by the United Nations’ Governing Council. The carbon emission standards developed by the ICAO target an average 4 percent reduction in cruise fuel consumption of new aircraft delivered in 2028 compared to fuel consumption of aircraft delivered during 2015.

Some aircraft companies have already been in the business of developing biofuels which create a lower carbon footprint. A so-called “green diesel” is being developed by Chicago-based aircraft company Boeing (NYSE:BA) which can emit up to 50 percent less carbon than traditional fossil fuels over its lifecycle. Boeing completed the world’s first flight using a fuel blend including green diesel in December 2014 when its ecoDemonstrator 787 aircraft took off with a blend of 15 percent green diesel and 85 percent petroleum fuel in its left engine.

Another Chicago airline company, United (NYSE:UAL), has also gotten into the jet biofuel development game. That company has committed to buying 15 million gallons of sustainably produced jet biofuel from Pasadena, CA-based AltAir Fuels over a three year period. United will create a fuel blend containing 30 percent biofuel and expects to reduce its carbon emissions by 60 percent over the course of the fuel’s lifecycle.

New aircraft designs being pursued by Netherlands-based aerospace company Airbus Group (EPA:AIR) could significantly reduce the amount of fuel consumed on a per-flight basis. The company is developing a single-aisle plane known as the A320neo which can utilize next-generation engine options and fuel-saving wingtip devices. Airbus believes that the A320neo can reduce fuel consumption up to 20 percent per flight by the year 2020.

There’s no argument to make against the development of technologies that can reduce the impact of aircraft emissions on the environment. Indeed, the completion of the world’s first solar-powered flight around the globe by the Solar Impulse 2 this July shows that the future of aviation could happen without consuming a drop of fuel. However, there is an argument worth pursuing that increased environmental regulations are perhaps misguided in the notion that the progress of aviation innovation can fit into a federally appointed timeline.

The EPA isn’t the first federal agency which has waded into the debate over reducing aircraft emissions. In June 2012, the Federal Aviation Administration (FAA) unveiled an aviation GHG emissions reduction plan, which announced the ambitious goal of achieving carbon-neutral commercial growth, meaning no increased carbon dioxide releases in production or operation, for the U.S. commercial aviation industry by 2020. The FAA assumed that within eight years, aircraft would be utilizing alternative fuels and thereby reducing carbon emissions by 80 percent over the fuel’s lifecycle. New engine technologies, reductions in cruise speed and other fuel-saving tactics could improve fuel efficiency by up to 30 percent, the agency reasoned.

It’s been a few years since that FAA GHG reduction plan came out and yet the industry is not seeing the downward trajectory required to hit the ambitious fuel consumption reduction goals. According to statistics published by the U.S. Department of Transportation, jet fuel consumption by certified carriers has hovered between about 11 billion gallons and 10 billion gallons between 2009 and 2014. That’s down from a high point of 14.4 billion gallons in 1999 but recent years are not showing a significant reduction in the amount of fuel consumption which could be expected from increased efficiency.

The limited impact of aforementioned biofuel and other aircraft innovations is also worth considering. The highest production levels conceived by Boeing for its green diesel would only supplant 1 percent of the world’s total jet fuel demand. The 15 million gallons of biofuel being used by United is similarly only a tiny fraction of what federal regulators are expecting in terms of rapid alternative fuel use and the airline company is only shipping that fuel to Los Angeles International Airport at the moment. The Solar Impulse 2 did complete a flight around the world but it took 16 months to do so and had to be grounded for at least one long stretch to fix battery damage.

The effect of increased regulations for the energy sector and their effect on American jobs also deserves some scrutiny. Between September 2014 and April 2016, the American coal mining industry lost 191,000 jobs according to analysis of data published by the U.S. Bureau of Labor Statistics. At least some of this job loss can be attributed to climate change initiatives being pursued by President Barack Obama and the EPA which the U.S. Chamber of Commerce reported would eliminate as many as 224,000 jobs in the coal industry by the year 2030. Increased coal production in the face of coal job losses indicates that technological improvements are more deleterious to jobs in the coal industry but the costs associated with increased regulation certainly aren’t helping. And alternative energy industries are not replacing these jobs, recently evidenced in SolarCity’s decision to reduce its jobs commitment at a solar panel production plant in Buffalo to a third of its original promise before the plant has even opened.

Add the fact that climate change might not be the nightmare doomsday scenario some of the American political elite has been suggesting, and increased emissions regulations seem even more misguided. Consider the 2003 climate change report issued by the U.S. Pentagon, which suggested that the Hague region of the Netherlands and inland California would both be underwater by 2007. Almost the opposite of that has occurred in California, which suffers from a multi-year drought, and life in the Hague continues on as per usual. And despite all of the clamor over the scientific claims over the effects of manmade climate change, even the environmental scientific journal Nature published a study this April on Northern Hemisphere hydroclimate variability going back 12 centuries from a research team in Stockholm, Sweden, which questions the currently existing scientific models on climate change. The study found anomalies in climate model simulations and concluded that “much work remains before we can model hydroclimate variability accurately.”

The fact that climate science and climate predictions may not be as accurate as many believe certainly doesn’t mean we shouldn’t pursue clean, green technologies, and the green economy is coming along, as well it should. Of course, the green economy is in its very infancy. Politicians who assume that increased regulation will naturally cause innovation occur faster will likely have a rude awakening. Innovation is the mother of necessity, but mandating necessity does not always mean that innovation will become readily available over the short term to meet unrealistic goals.

It is also important for politicians and regulators to keep firmly in mind the reality that increased costs for regulatory compliance draws money away from potential research and development initiatives.

A study of the economic impacts of air quality regulations on American manufacturing plants between 1972 and 1993 conducted by the National Bureau of Economic Research found that the economic cost of such regulations caused a decline of 8.8 percent of profits in the manufacturing sector. That’s $21 billion per year that did not go to employee wages and couldn’t be used on research and development. Reduced economic output in the face of rising population numbers also produces a drag on the overall economy and R&D initiatives are often the subject of the first budget cuts during economic downturns. All of this points to a downward spiral in which increased environmental regulations actually pose an obstacle to the development of the green economy in the United States.