“Only 16% of the Board’s eligibility decisions fully reversed the eligibility rejections, and none of the other 84% of the applications have been allowed despite the effort and the expense of the appeal.”

Approximately two years ago, the Supreme Court’s issuance of Alice Corp. v. CLS Bank[i] changed the world of prosecution. The decision led to a stark decrease in allowances of patent applicants across industries as diverse as software to biotechnology.[ii] Applicants stuck in the post-Alice purgatory have had several prosecution options:

Past reports have indicated that the reduced-allowance effect of Alice is not consistent across biotechnology art units[iii] or across computer-related art units[iv] Potentially, this art-unit variability suggests that some of the “harsher” art units are issuing erroneous eligibility rejections and that appealing the rejection would lead to favorable results. [v]

Only recently has the Patent and Trademark Appeals Board (PTAB) begun to issue decisions on appeals with appeal briefs filed after the Alice decision. We requested that the United States Patent and Trademark Office (PTO) identify each published application (and the art unit for which the application was assigned) for which: (1) an appeal brief was filed since September 1, 2014 (a date on which we estimated that Alice would have been considered by the applicant or representative) and (2) a PTAB decision was issued. As of July 12, 2016, 162 PTAB decisions met these criteria.

Overall, the PTAB affirmed or affirmed-in-part two-thirds of the appeals, 53% of which being affirmed in full and 14% being affirmed in part. As shown in FIG. 1, the lowest affirmance rate was observed in Technology Center 3700 (which examines applications corresponding to industries such as manufacturing, medical devices, mechanical engineering and education), where only 22% of the appeals were fully affirmed. Meanwhile, approximately 70% of appeals in each of Technology Center 1600 (Biotechnology and Organic Chemistry), Technology Center 1700 ( Chemical and Materials Engineering) and the business-method “BM” art units (3621-29 and 3681-96) were fully affirmed. 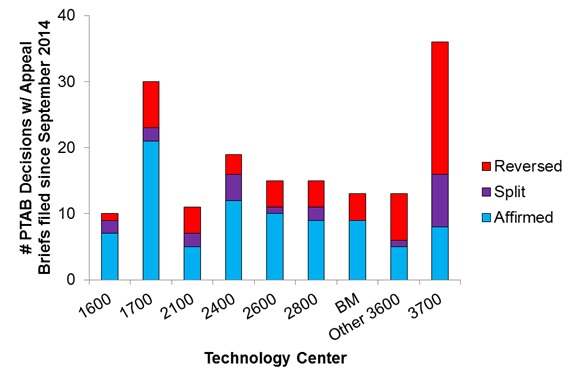 The most common type of rejection at issue in the appeals was obviousness. (See FIG. 2.) Meanwhile, only 18 appeals involved patent eligibility, which is perhaps surprising given the recent turmoil in this space. Of the eligibility appeals, 12 (66%) were from a business-method art unit. 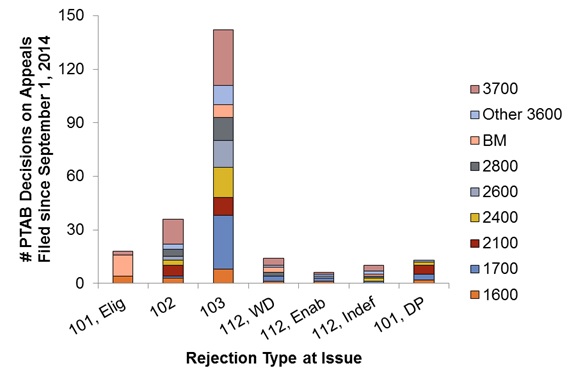 Appeals of rejections involving § 101 were unlikely to be successful, with 79% of patent-eligibility rejections (15 of 19 appeals) being affirmed. (See FIG. 3.) Specific data on each of these appeals involving an eligibility are shown below in the Table. The Appeal Briefs filed in appeals where at least one 101 rejection differed markedly, in terms of an extensiveness of argument, cases cited and whether extrinsic evidence (e.g., a Declaration) was submitted. 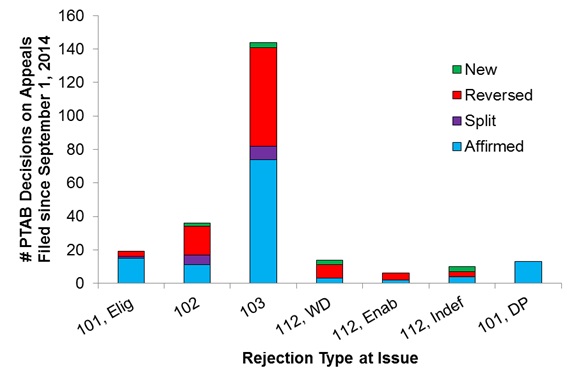 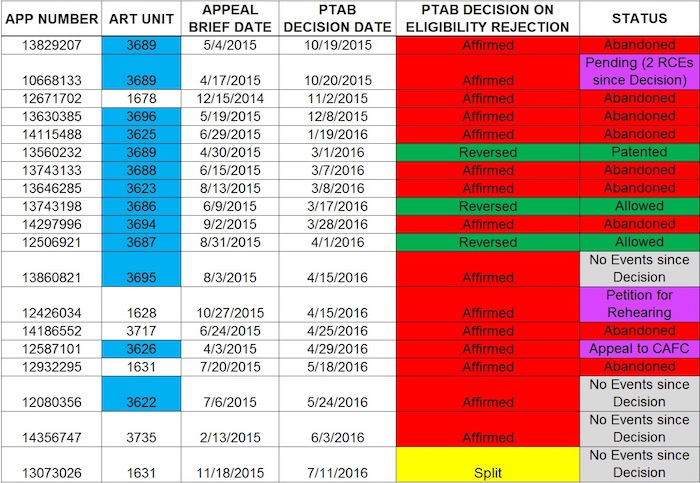 TABLE. Application data for post-Alice appeals with PTAB decisions rendered for eligibility rejections. Data is defined by column headings. Business-method art units are highlighted in blue. We highlighted the “Status” cells in purple for applications where the applicant has engaged in prosecution following a PTAB affirmance decision.

Does this data mean that it is unwise to appeal a patent-eligibility rejection? The authors feel as though, unfortunately, this is yet to be clearly determined. The sample size is small with only 19 decisions having been issued by the PTAB to address arguments corresponding to patent eligibility presented after the Alice holding. Further, amongst the appeals involving patent-eligibility rejections, the most recently filed appeal brief was filed in November 2015. Thus, all of the appeal briefs and most of the PTAB decisions were filed prior to the development of more recent case law that has further illustrated why and how various software technologies can be patent eligible.[vii] Further, most of the eligibility-involved PTAB decisions were issued prior to these recent cases, which may further have disadvantaged the appellants. Continued assessment of PTAB decisions on post-Alice appeals will provide further insight as to the Board’s interpretation of this area of law fraught with uncertainty and applicant frustration.

However, despite the small sample size, the fact remains that only 16% of the Board’s eligibility decisions fully reversed the eligibility rejections, and none of the other 84% of the applications have been allowed despite the effort and the expense of the appeal. While appeals can be an attractive mechanism by which to present arguments to a new decision-maker, an applicant should be aware that the statistical tendency of the PTAB “decision-maker” may no longer seem so attractive in the land of § 101 rejections, and that this gamble may not be worth the cost unless the applicant is equipped with very strong arguments.