“How refreshing it would be to have our Congress and the nation’s highest Court be as concerned with superbugs as they seem to be with PR-created patent trolls. 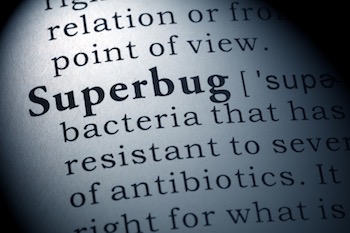 Trolls inhabit fairy tales. “Patent trolls” screened so much in Washington still are undefined. Neither has killed anyone. Superbugs are real. They live in our healthcare facilities where they kill thousands every year. Yet trolls still command our Capitol’s attention. This situation has to change. We are running out of time.

Warring among themselves for 3 billion years, microbes are planet earth’s most durable survivors. Through the mysteries of evolution they simply withstand enemy attacks until they randomly become impervious to them. Some, called pathogens, are lethal to humans. We became their enemy only eighty years ago, attacking first with penicillin, but then with indiscriminate anti-bacterial carpet-bombing that randomly enabled the development of microbes resistant to our anti-bacterial assault. We call them superbugs. Lurking in hospitals, these microbial survivors prey upon defenseless patients while resisting antibiotics to which they are now impervious. Unchecked, their population is increasing.

Buying time, public health authorities are doing what they can to slow their growth. But Center for Disease Control (CDC) Director Tom Frieden has recently confirmed their multiplication. “New data show that far too many patients are getting infected with dangerous, drug-resistant bacteria in healthcare settings. Doctors and healthcare facilities have the power to protect patients – no one should get sick while trying to get well.” MRSA alone takes a terrifying toll. In 2011, the last year for which data is available, the CDC estimates that within healthcare facilities there were more than 80,000 invasive MRSA infections resulting in 11,000 related deaths. Hospitals are now doing better according to the CDC, but they must continue to improve. CDC knows it is fighting a rear-guard action.

Bio-science researchers recognize that we are in a race to conquer them before they conquer us. And even if we win this heat, the bugs’ evolutionary-driven drug resistance cycle will repeat itself until we also can arrest their morphing into new drug resistant pathogens. We are slowly gaining ground; but time is running out. But if we fail, it will be our fault. Congress and the Courts are crippling a core component in this contest.; one we actually control. As law it can evolve itself.  Instead the DC legal guardians of our innovation ecosystem’s capacity to convert scientific gains into permanent solutions are undermining it. By destabilizing patents needed to support private sector investments that will get us safely to the finish line, the USPTO, the Congress and the Courts are unravelling the fabric of predictable patent reliability. Please take a moment to read Lena Sun’s recent article about a new microbial discovery, ludunin.  For those of us familiar with today’s patent unreliability, the researchers’ expectation (excerpted below) for private sector participation jumps off the page.

“The German researchers said lugdunin also is not prone to causing S. aureus to develop resistance. They are not exactly sure how it works, and clinical development is many years away and will require partners from the pharmaceutical industry….”

If the IP protection needed to effectuate this development has become unreliable and unpredictable, these “researchers” can not expect the referenced private sector “Partners” to participate. Their important discovery will have been for nought.

Will more research help ? A National Action Plan for Combating Antibiotic-resistant Bacteria backed by a $160 million dollar 2016 appropriation to carry out five defined goals is underway. It will fail because ironically it includes the very goal that Congress and the Courts are thwarting. Accelerate Basic and Applied Research and Development for New Antibiotics, Other Therapeutics, and Vaccines. Through NIAID, NIH has launched a grants program designed to find other ways to contain this approaching epidemic. But public health and basic science cannot conquer superbugs alone . They need the massive infusion of private sector investment the USPTO the Courts and Congress are discouraging.The first confirmed superbug killer, a soil-based microbe called Teixobactin, was recently discovered in Maine. Experts confirm that although the method of culturing and isolating Teixobactin has been patented, the microbe itself is not patent eligible. The latest discovery as Lena Sun explains, actually promises to deliver the double wallop of killing the bacteria and its mutative adaptability.

How will our patent system treat this wonderful new discovery?  How long will it take before its curative benefits can be deployed ? We can only hope that DC’s meddlers in our innovation ecosystem read the Ms. Sun’s article. Because however fervently the medical and scientific communities respond to this growing superbug crisis, IP’s DC government legal eagles are either unaware or unconcerned. The USPTO is regularly rejecting microbial patent applications in blind servitude to Alice-Mayo’s confusing eligibility formula. We can hope, but cannot be assured, the Federal Circuit will make sense some day of Alice-Mayo’s  two-step test. But when? Worse, it appears that SCOTUS is infected by the anti-patent poison infesting our Capitol. How refreshing it would be to have our Congress and the nation’s highest Court be as concerned with superbugs as they seem to be with PR-created patent trolls.

The private sector investment needed for lugdinin’s future accelerated development, clinical testing, approval, and delivery must be preceded now with advance due diligence that can reasonably predict adequate and timely ROI. Can outcomes be predicted? Can this new discovery be commercialized? Despite the common law’s capacity to evolve, will judicially-evolved “Laws of Nature” doctrine be used to retrospectively erase lugdinin’s patent eligibility? And even if like some kind of process patent like teixobactin’s is obtained, will USPTO’s IPR invalidate it later? Can IPR’s invalidation decision be appealed? And if so, will SCOTUS augment its ruling with a snarky footnote as it did with trolls?  Will the Judiciary Committees in Congress continue pushing legislation like HR 9 and S 1137 that can retrospectively nullify it ?

Like superbugs, our patent uncertainties are real. They are also self-inflicted  They haunt and hobble private investment in this critical contest. Health care officials can monitor compliance. Medical providers can do their best. Scientists can investigate. But our uncertain patent laws, the one headwind we can influence, is slowing us. Indeed the USPTO, the Courts and Congress are mutating in the wrong direction. This existential race is not about fairy tale trolls. It is not about protecting IT megatechs from serially-incurred infringement damages. It is about life and death. Do we not deserve relevant responses from the overseers of our patent system? Should mounting uncertainties determine whether we win or lose to superbugs ? Why do we continue enabling these self-inflicted barriers to stand? Our patent system is plagued by congressionally-created uncertainties.

Candidates asking for support should commit to understanding how our public /private innovation ecosystem works. They should commit to joining the medical and scientific first responders to this crisis rather than nullifying their progress. They have heard about trolls. It is time they heard about superbugs.

Chris Gallagher is President of IP Strategic.com and a perennial selection to The Best Lawyers in America. Having spent years as one of the most influential and highly regarded advocates in the [...see more]