The Patent Gender Gap: Less than 20% of U.S. patents have at least one woman inventor 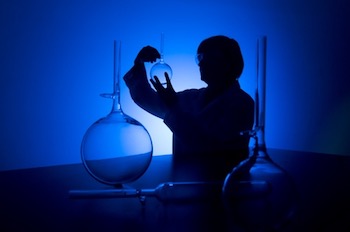 Although women have more than quintupled their representation among patent holders since 1977, a pronounced patent gender gap remains. In 2010, according to a new briefing paper by the Institute for Women’s Policy Research (IWPR), fewer than one in five patents had at least one woman inventor named. Although quintupling the number of women inventors over the last 30+ years is impressive, at the current growth rate it is projected that it will take until 2092 for women to reach parity in patenting.

There is a very real patent gender gap. The question is what, if anything, can be done to close the gap?

The IWPR briefing paper reports that women make up only 7.7 percent of primary inventors who hold patents. According to IWPR, those women who are the primary inventor tend to hold patents for inventions associated with traditional female roles, such as jewelry and apparel.

“Not only do women and people of color have unequal access to the economic rewards and fulfillment of STEM careers and inventing, but the nation is missing out on a huge swath of talent and innovation that could contribute to solving important social and scientific problems.” said IWPR Vice President and Executive Director Barbara Gault, Ph.D. “Supporting women inventors is a key element of a thriving innovation and entrepreneurial ecosystem in the United States.”

One of the main reasons why there is such a pronounced patent gender gap, with women having such a small share of the overall number of patents, is due to their significant under-representation in patent-intensive fields. For example, in 2010, only 19.1 percent of engineering degrees, 20.9 percent of computer science, and 38.7 percent of degrees in the physical sciences were awarded to women. Meanwhile, 58.3 percent of degrees in the biological sciences were held by women. 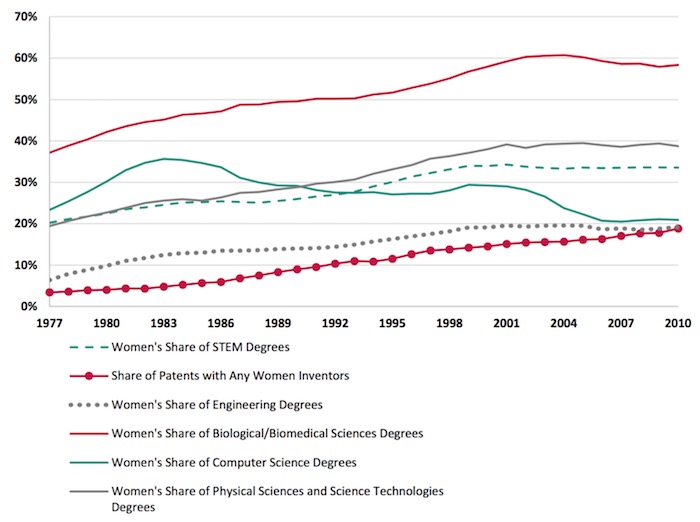 Unfortunately, the problem may not be so much with women as much as it is with young girls.  According to the Girl Scouts of America, girls start losing interest in math and science during middle school years. Young girls seem more interested in careers where they can help others, such as teaching, for example. The Girl Scouts also suspect that the “lack of interest may be a product of older stereotypes about girls doing poorly in math, or of low confidence in their abilities, or alternatively may reflect a general well-roundedness in girls that leads many to turn to their high verbal skills during career planning.”

Whatever the case may be, with the seeds of the problem planted in middle school the solution will be a harder one to tackle. Of course, this does not mean that the problem is not worth addressing, it just means that in order to have a long-term positive impact a big part of the solution will need to be to reach girls before middle school when they start to lose interest in math and science.

In order to close the patent gender gap it will be necessary to reach young girls before they choose a path away from science and math, whatever the reason may be. One way to reach children is with positive role models. With respect to encouraging more participation in STEM fields that means that there needs to be more successful female role models for girls to look up to and want to emulate. Thus, the solution to achieving parity, closing the patent gender gap and leveraging the untapped resource of female ingenuity cannot only focus on youth. The solution needs to address both ends of the lifecycle.

One easy recommendation proffered by IWPR, which could be nearly immediately implemented, is for the Patent Office to start collecting at least some basic demographic information about inventors. This can make it more difficult for researchers to obtain anything other than very broad, top-line information. Even then the data may not be foolproof given that researchers typically use name-matching software to identify gender, race and ethnicity. Getting better data will give us a better picture of what is happening and where to focus resources to tap into vast wells of undiscovered potential.