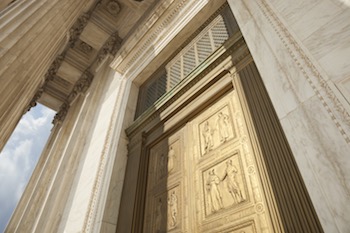 On Friday, July 22, 2016, the New York Intellectual Property Law Association (“Association”) filed an amicus brief encouraging the Supreme Court to seize the opportunity presented by Star Athletica, L.L.C. v. Varsity Brands, Inc., No. 15-866, to clarify the process that courts should employ to determine when a design of a useful article is entitled to copyright protection. To this end, the Association proposed a new test asking:

This case concerns Star Athletica’s alleged infringement of Varsity Brands’ purported copyrights in the design of certain cheerleading uniforms.  Under the Copyright Act, because clothing possesses an intrinsic utilitarian function (covering the body, providing warmth and protection from the elements, etc.), clothing designs historically have not been protected by copyright unless the claimed design is physically or conceptually separable from the garment’s utilitarian features.  The district court found in favor of defendant Star Athletica, concluding that the design elements in Varsity Brands’ cheerleading uniforms were not separable from the uniform’s function.  The Court of Appeals for the Sixth Circuit reversed, and in doing so, devised a new test for assessing the copyrightability of a design of a useful article.

Given the number of different approaches to conceptual separability taken by courts across the country, this case does not present a typical circuit split. Instead, because the key terms in the Copyright Act are not defined, the tests used by courts, the Copyright Office and scholars evaluate a variety of overlapping factors in order to assess whether a given design is “conceptually separable” from the utilitarian features of the useful article in which it is embodied, and therefore copyrightable. Consequently, litigants and businesses engaged in industrial design find themselves in a landscape where it is challenging, at best, to predict whether and to what extent their designs will be deemed protectable by copyright.

The Association took no position with regard to the dispute between the parties, but disagreed with the Sixth Circuit’s analytical framework. In its brief, the Association proposed an alternate framework, arguing that a proper analysis of copyrightability must begin with consideration of the claimed design at issue, rather than with an analysis of the utilitarian features of the article embodying that design. Further, while the Association recognized that there is not necessary only one correct test for conceptual separability, certain tests are particularly inefficient, inconsistent and likely to yield unpredictable results. Specifically, the Association eschews tests with overly subjective elements. Instead, the Association recommends adoption of a test where the inquiry is limited to analysis of the design and article at issue.

The following excerpt is taken from the brief, which is available at http://www.nyipla.org/nyipla/AmicusBriefsNews.asp .

[T]he “tests” identified above do not, in the Association’s view, describe ten wildly divergent philosophies of copyright law. Indeed, courts often apply many approaches and tests simultaneously, recognizing that “even when [] judges have disagreed on the appropriate application of the Congressional Mandate to the case before them, their insight yields a bountiful harvest for those of us who now walk the same interpretative path.” Pivot Point Intern., Inc. v. Charlene Products, Inc., 372 F. 3d 913 (2004) . . . .

That being said, the multitude of tests creates unpredictable results. Because the courts and the Copyright Office have different tests, it is uncertain whether and to what extent designs that combine utilitarian functionality with potentially protectable expression are protected. Authors of creative designs struggle to identify which elements, if any, of the design are copyrightable. To make matters worse, even if some portion of the design is deemed protectable by one authority, another authority might conclude that it is not.

Moreover, several of the above tests are flawed because they require those assessing copyrightability to look beyond the work in question to draw conclusions about an author’s intention or the public’s perception. Separability, as described in the Copyright Act, is an inherent quality of a work of authorship; it does not live or die in the eye of the artist, a reasonable observer, or any third party. As this Court has noted with respect to originality:

It would be a dangerous undertaking for persons trained only to the law to constitute themselves final judges of the worth of pictorial illustrations, outside of the narrowest and most obvious limits. At the one extreme some works of genius would be sure to miss appreciation. Their very novelty would make them repulsive until the public had learned the new language in which their author spoke. It may be more than doubted, for instance, whether the etchings of Goya or the paintings of Manet would have been sure of protection when seen for the first time. At the other end, copyright would be denied to pictures which appealed to a public less educated than the judge.

Bleistein v. Donaldson Lithographing Co., 188 U.S. 239, 251-52 (1903). Proper inquiries, therefore, focus on the claimed design of the object itself and ask whether it is capable of being separated in some manner.

The Association recommends adopting a framework that is consistent with the Copyright Act and fosters judicial economy, consistency, and greater predictability. A framework that begins with a narrow inquiry into what precisely is being claimed, and only then expands to whether and how the claimed design is integrated with an underlying useful article allows courts to avoid unnecessary factual determinations.

To the extent that the law can be applied in a way that better enables the public to understand what the protectable aspects of a given object’s design are, designers of industrial goods will have greater confidence that their creations do not infringe. However, when the contours of a design’s protectability are shaped by a particular individual’s perceptions or thoughts, then such confidence is difficult to achieve.

Joseph Farco is an attorney with Locke Lord LLP. He is a member of the Firm’s intellectual property law group, and has considerable experience in patent litigation, ITC proceedings, and patent prosecution. [...see more]