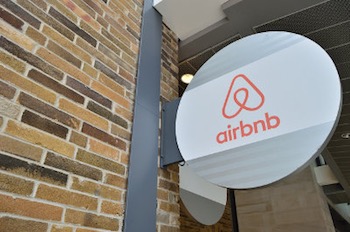 The San Francisco-based online lodging rental company Airbnb is proving to be very disruptive to the hotel industry. In New York City alone, the company has seen short-term rentals increase in that metropolis from 2,652 listings in 2010 up to 16,483 listings during the first half of 2014 alone, according to statistics compiled by the online stat portal Statista. Airbnb’s official website boasts that the company has more than 2 million listings in more than 34,000 cities and 191 countries.

Airbnb’s rise could be characterized as meteoric. Since its founding in August 2008, it has grown to a total listing base which outpaces the combined inventory of the world’s three biggest hotel chains: Hilton Worldwide (NYSE:HLT) of Tysons Corner, VA; Marriott International (NASDAQ:MAR) of Bethesda, MA; and the British-based InterContinental Hotels (NYSE:IHG). The financial publication Bloomberg recently reported that the company reached its 100 millionth customer by this July 11th. As of late June, the company was engaged in a round of financing which one source indicates could lead to a $30 billion valuation for the company.

Of course, no success is so great that it cannot be met with negative consequences. In Airbnb’s home city, the San Francisco Board of Supervisors passed a law amending short-term rental law within the city. Under the terms of the new regulations, websites allowing short-term rental listings for properties which have not been registered with the city would be on the hook for fines. Property owners who listed their homes for such short-term rentals were already required to register with the city but few owners have registered and the city is now looking to place the onus squarely on Airbnb and others.

Rather than take a proactive approach with the property owners themselves, Airbnb is challenging the new San Francisco rental rules by filing suit in federal court. Among the lawsuit’s claims is the challenge that San Francisco’s newly amended rental law runs afoul of Section 230 of the Communications Decency Act which gives immunity to providers of interactive computer services that publish information uploaded by other people. The lawsuit also charges the San Francisco rental law with violating federal privacy standards as well as First Amendment speech protections.

It’s a good time for Airbnb to start flexing its muscles in legal and political arenas for protecting its own interests. This April, the company had increased its lobbying efforts in our country’s capital by hiring Vin Weber, a former Congressman from Minnesota, as well as the public affairs firm Mercury. That news came about a month after a group sponsored by the hotel industry, Share Better, increased its lobbying investment against Airbnb to $1 million over six months and developed a television ad against the company for national distribution.

San Francisco is not the only market where Airbnb has been met with legal turbulence. Short-term rental laws in New York City were amended in 2010 and consider apartment rentals of less than 30 days to be illegal. In the middle of June this year, both houses of New York’s state legislature passed a bill that would impose heavy fines for anyone advertising a short-term rental. Violators are fined $1,000 for a first offense, $5,000 for a second offense and $7,500 for every offense thereafter. In early July, Airbnb took down 2,233 from that city, about 5 percent of the website’s total NYC listings, to try and placate state officials; the company targeted hosts with multiple listings in the city. Through the middle of July, it does not appear that Governor Andrew Cuomo has signed the New York state bill into law.

One of the major objections raised by the anti-Airbnb crowd is the effect that short-term rental listings have on the overall rental market in a city. Where apartments are kept vacant and unlisted in order to keep them available for Airbnb rentals, it removes units from a city’s housing inventory which could be taken by full-time residents. A June 2016 report from Share Better looking at the effects of Airbnb in the NYC market showed that 91 percent of NYC Airbnb listings were concentrated in the boroughs of Manhattan and Brooklyn. Those boroughs also had the largest median monthly rental prices in New York, $3,500 per month and $2,385 per month respectively. The report concludes that Airbnb listing activities correlate heavily with neighborhoods having increased rental rates and quickly changing neighborhood demographics.

Despite the growing regulatory dustup concerning Airbnb, the short-term rental market continues to thicken with competitors. In July, the on-demand room sharing service Overnight launched in New York City after offering listings in Los Angeles, San Francisco and Austin, TX. The app only had about 4,500 hosts in its total network but it allows host to list shared room accommodations instead of a full apartment and encourages quick responses to reservation requests within a 10-minute window. Some competitors are rushing in to serve consumers who have been let down by their own experiences with Airbnb. One such service is Innclusive, a room-sharing service with anti-discrimination policies in place addressing concerns raised by former Airbnb users who felt they were discriminated against by some hosts who denied accommodations because of their race.

On the other side, major hotel chains seem to be waking up to the potential of such app-based platforms for attracting lodgers. HotelTonight is an app which offers discounted hotel rooms to people searching for accommodations without advanced reservations, matching vacancies to last-minute lodging searches. This April, the app expanded its concierge service Aces, a chat-based service for requesting toiletries or information on local activities, to 30 cities around the world for those renting rooms costing more than $200 per night. This June, HotelTonight began Touch ID fingerprint scan support for signing into the app and began offering discounts to customers making payments with Apple Pay. This year also saw the founding of Winston Club, a similar hotel rental service which requires users to go through a five-step background check before they’re able to rent. The pre-screening process allows users to save half of the listing price on hotel accommodations by sharing the room with other pre-screened users.

For Airbnb, its major challenges don’t come so much from these competitors as they do from trying to stay ahead of the regulatory scuffle. This July, it was reported that Airbnb would begin turning over hotel taxes to the city of Los Angeles, another municipality which considers short-term rentals of less than 30 days to be illegal. Airbnb itself estimates that it has turned over a total of $85 million in tax revenue to 190 jurisdictions as of this June. In the Canadian province of British Columbia, the city of Vancouver was engaged in an ongoing study of how the 5,000 Airbnb listings there were affecting the local apartment rental market. Back in the United States, calls for the Federal Trade Commission to investigate the national effects of the short-term rental markets were issued by Senators Elizabeth Warren (D-MA), Brian Schatz (D-HI) and Dianne Feinstein (D-CA).

There are indications that Airbnb’s federal suit against San Francisco are holding some sway even if they’re not wiping the short-term rental law slate clean. In the days after the suit was filed, The San Francisco Chronicle reported that city lawmakers were considering amendments to that law which would only impose fines on the website once it had accepted fees from a rental unregistered with the city and not imposing those fines simply when the property was listed on the service.