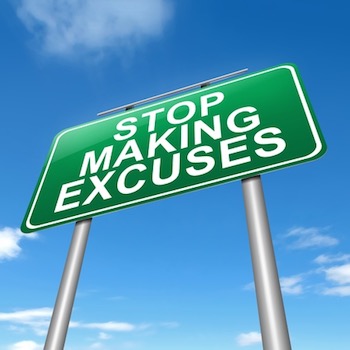 Recently the United States Patent and Trademark Office (USPTO) announced an initiative to streamline patent prosecution by adding an opportunity for patent applicants to work with an examiner panel after a final rejection and before needing to file an appeal or request for continued examination (RCE). Any new tool for patent applicants to get to “yes” more quickly and without being required to needlessly wait for years for additional consideration is welcome. However, new tools such as the post-prosecution pilot program will do nothing to help applicants who are forced to deal with examiners who simply refuse to issue patents. Unfortunately, there are pockets of these recalcitrant examiners at the Patent Office.

Several days ago I wrote about the extraordinarily low allowance rates of Art Units 3689 and 3622. I’ve received feedback suggesting that the allowance rates I reported, 7.1% and 9.5% respectively, seem too high based on the common experience of what patent practitioners witness in those Art Units, at least since the Supreme Court’s ruling in Alice v. CLS Bank. I also received a tip recommending that I specifically take a closer look at Art Unit 3683 because the allowance rate I reported — 64.6% — is certainly not correct, at least not correct for 2016.

Upon closer review things are much, much worse than I previously reported. The problem is also far more widespread. Using LexisNexis Patent Advisor®, I looked at the E-commerce Art Units, this time focusing on what has happened only over the past 18 months. Focusing on this segment of post-Alice prosecution the allowance picture is utterly atrocious. [1] 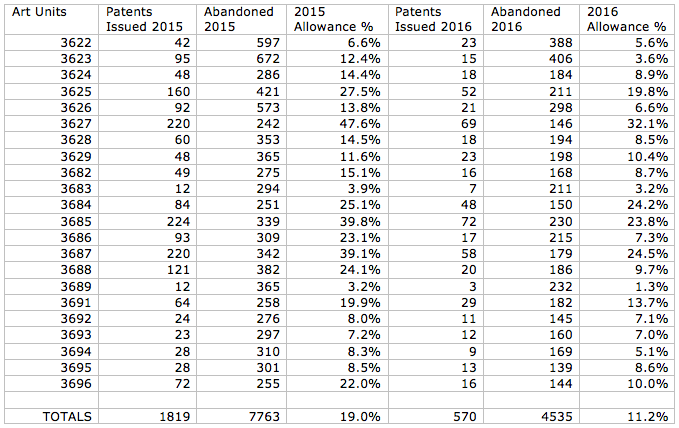 Clearly, things are getting worse, not better, in E-commerce Art Units at the Patent Office.

As you can see, only 12 patents were issued by Art Unit 3689 in 2015, while 365 applications went abandoned, which corresponds to an allowance rate of 3.2%. So far in 2016 there have been only 3 patents issued by Art Unit 3689, while 232 patent applications have gone abandoned, which corresponds to an allowance rate of 1.3%. Of the three patents that were issued one was issued because the Patent Trial and Appeal Board overruled the examiner’s final rejection and ordered the patent issued. See Ex parte Jacob A. Shipon. The PTAB found that the examiner erred with respect to the 101, 103 and 112 rejections, or in other words pretty much erred across the board.

While we see a notable difference in allowance rates between similarly situated Art Units examining the same type of patent applications, what is most alarming is that allowance rates in almost all of these Art Units are down rather dramatically in 2016 compared with 2015.

While we can hypothesize (and perhaps disagree) why allowance rates have dropped dramatically in 2016, everyone should be able to agree that the 1.3% allowance rate in 2016 for Art Unit 3689 is wholly unacceptable. An allowance rate of 1.3% demands investigation by the Patent Office, or by the Commerce Department Inspector General.

Obviously, the stories about patent examiners simply not issuing patents are very real.

Given the devastation brought on the patent community by certain patent examiners and the indifference of the Patent Office, patent applicants and their representatives absolutely need to seek every advantage possible. If patent examiners in certain Art Units, like Art Unit 3689, are not going to issue patents then applicants must do whatever possible to stay out of those Art Units. While that may not always be possible, creative drafting techniques could help steer you from one Art Unit with an utter disdain for patents to an Art Unit where you at least have a chance. Thus, until such time as the Patent Office decides to solve the problem of recalcitrant patent examiners tools like LexisNexis PathWaysTM, which allow applicants to know which art units a patent application is likely to be assigned to even before it is filed, are absolutely essential.

Writing patent applications so you won’t be sucked into the black hole that is Art Unit 3689 can help, but let’s face it, the statistics for all E-commerce Art Units are pitiful and getting worse even a full two years post-Alice. To call this depressing is an understatement. How is it possible that a patent examiner, who is supposed to be hired to issue patents, can actually keep their job when they refuse to issue patents?

For follow-up articles on this topic please see:

[1] My previous article reported allowance rates based on all allowances since 2000. Focusing on a post Alice time frame of all of 2015 and 2016 to date reveals starkly different numbers that show the magnitude of the problem facing applicants innovating in the e-commerce space.