What the Patent Office Refuses to Understand 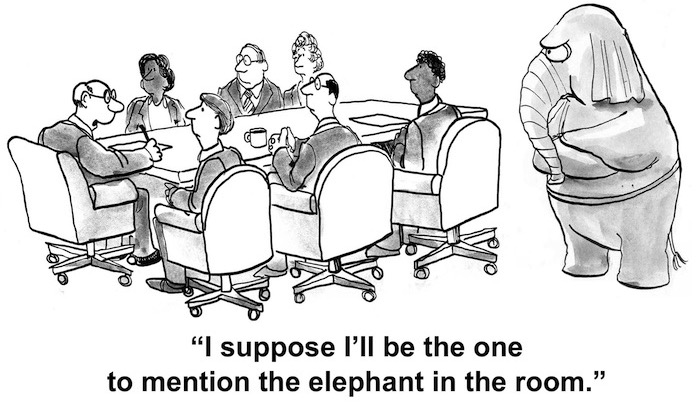 As I always do when I broach this topic, let me state the obvious: The overwhelming majority of patent examiners are dedicated, hard working, highly educated, and motivated professionals. But even a small percentage of bad eggs can cause real pain within certain sectors of the patent community, particularly when there is a cluster of recalcitrant examiners, which seems to be the case.

As of the end of May 2016, there were 8,092 patent examiners employed at the Patent Office. As you might expect with any group that large, however, there are some that are not any of those things. Indeed, some patent examiners openly brag to patent attorneys and applicants that they have not issued a patent in years. Nothing is ever done about those small minority of recalcitrant patent examiners, which is one reason it is hard to take Patent Office initiatives to streamline patent prosecution seriously.

Let’s stop talking in hypotheticals. On Monday, July 11, 2016, using LexisNexis Patent Advisor®, I created the table below, which lists twenty-two Art Units within Patent Technology Center 3600. These Art Units are all assigned to examine applications that relate in one way or another to the general topic of Electronic Commerce. 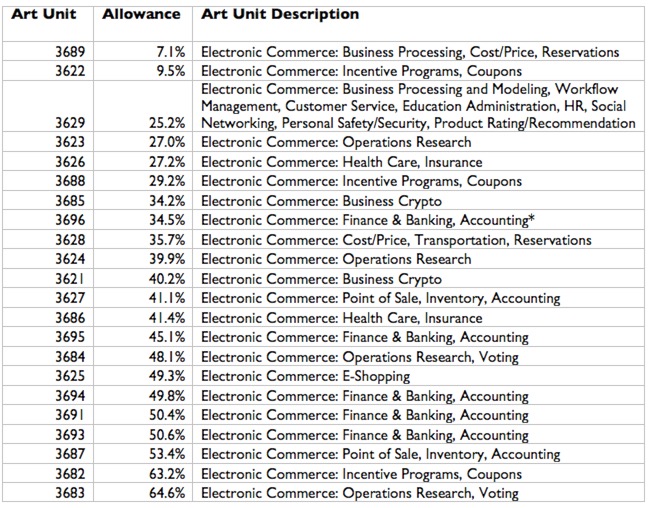 E-commerce Art Units at the USPTO.

You will notice that there are two Art Units, Art Unit 3689 and 3622, each having an overall allowance rate of under 10%. Meanwhile, the Art Unit with the highest allowance rate on the list allows 64.6% of patent applications.

This is not a blip on the radar screen for either 3689 or 3622. I’ve written about these Art Units (and others) for at least the last 5 years. Each time I’ve reviewed the allowance rates from 3689 and 3622 the allowance rate has been under 10%. Still, by all outward appearance it seems the Patent Office does nothing.

Similarly, if you look at Art Unit 3622, which handles applications dealing with incentive programs and coupons, and compare it with Art Unit 3688 and Art Unit 3682, both of which also handle patent applications relating to incentive programs and coupons, you see the same alarming trend. These three Art Units that handle the same type of patent application yet have allowance rates of 9.5%, 29.2% and 63.2%. Something seems seriously wrong and is screaming for investigation.

These widely divergent allowance rates are difficult to understand when you realize that Art Units 3689 and 3622 are dominated by major corporations. For example, according to LexisNexis Patent Advisor®, the most frequent owners/assignees in Art Unit 3622 are Google, Microsoft, Yahoo, Bank of America, IBM, Facebook, PayPal, Mastercard, eBay and Fujitsu. Similarly, the most frequent owners/assignees in Art Unit 3689 are IBM, SAP, Microsoft, Bank of America, Hewlett Packard, Fujitsu, Hitachi, Oracle and General Motors. We are not talking about small entities or independent inventors who are representing themselves. We are talking about multi-national corporations that hire the best patent attorneys at the best firms and the allowance rates are under 10% while similar Art Units are 5 or 6 times that?

Look, I don’t mean to rain on anyone’s parade. I’m all in favor of streamlining the patent prosecution process. Giving applicants more opportunity to explain why they are entitled to claims in a way that doesn’t require years waiting for either an RCE or appeal is wonderful. But let’s not lose sight of the fact that this additional procedural tool will do absolutely nothing to persuade recalcitrant patent examiners that simply collect a pay check and have little or no intention of ever allowing patent claims.

Not that my advice is being solicited, but I think it is well past time for the Patent Office to close down Art Units 3689 and 3622. Patent examiners in those Art Units should be reassigned to Art Units throughout the Office (preferably exemplary Art Units with higher allowance rates) so they can learn how the Office is supposed to operate.

* I could not find a definition for Art Unit 3696. It is not listed on the Patent Office page for Technology Center 3600, but it does exist. Art Units 3691 through 3695 all related to Electronic Commerce: Finance & Banking, Accounting, which is why 3696 is characterized in that way.