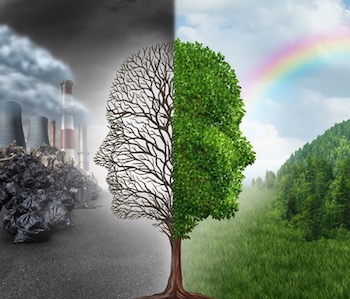 Climate change is a growing threat to our planet. In late November of last year, the United Nations Climate Change Conference was held in Paris, France. This conference negotiated the Paris Agreement, which is a global agreement on the reduction of climate change. On December 12, 2015, 195 participating countries agreed to reduce emissions as part of the method for reducing greenhouse gas. The participating countries agreed to reduce their carbon output as soon as possible and to do their best to keep global warming to below 2°C, or 35.6°F.

The panel began with Dr. Baliga, holder of 120 patents and a recent inductee into the National Inventors Hall of Fame, discussed his invention, Insulative Gate BiPolar Transistor (IGBT). The IGBT is a three-terminal power semiconductor device primarily used as an electronic switch, combining high efficiency and fast switching. This invention is used in almost every electronic and mechanical device and has saved enormous amounts of gasoline and electricity since its invention in the 1980s. When later asked what the upcoming President of the United States could do to better combat these climate change concerns, he responded that the “low hanging fruit” is technology relating to energy efficiency. Dr. Baliga discussed how lighting consumes 1/5 of the electricity within the United States and how a simple change from the incandescent bulb to the Compact Fluorescent Light (CFL) blubs can lead to a reduction of electricity use by up to 75%. However, in the United States, only 2 billion out of 5 billion sockets use CFL bulbs.

Dr. Johnson, also a recent inductee into the National Inventors Hall of Fame, an advocate for hydropower energy as an alternative energy source, discussed ways that hydropower could be integrated into the existing ecosystem. Dr. Johnson explained the concern with wind and solar panel, pointing out that wind energy is most efficient at night, solar panels are the most efficient during the day, and hydropower energy can fill in the gaps left by wind and solar energy. Dr. Johnson went on to say that future innovation in this area needs to come up with an integrated solution. Pump storage would be part of this solution, even with efficiency loss, as no carbon based electricity is used.

Nate Hurst addressed the actions that large corporations can take in order to encourage innovation in the climate change and renewable energy field. Hurst explained the most effective method is for large corporations to “look across the entire value chain” and drive energy efficiency throughout the supply chain. In addition, providing sustainable options to consumers, such as CFL blubs, at competitive prices is an effective way of promoting sustainability and energy consciousness. Hurst also discussed reasons why it is difficult for corporations to transfer to a 100% sustainable energy model, emphasizing that price is a factor. He pointed out, however, that government incentives and credits can do a lot to address this and encourage sustainability.

Bob Perciasepe answered the question of what the Federal Government can to do combat this climate challenge. Perciasepe discussed how patents can stimulate innovation surrounding renewable energy, however, there must be policy context behind this. He further explained that a good policy would make it more expensive to emit greenhouse gases. “This would stimulate innovation to reduce greenhouse gases, thus to reduce cost. Right now we do not value the reduced emissions. Society has put a moral value on that, but not a monetary value…Expecting the Federal government to craft something that is rational and in that mode is not likely to happen.” Perciasepe went on to discuss how a lot of action to address this is taken at the local, state and corporate level, referencing the Paris Conference mentioned previously in this article. Ten states now have a price on carbon, and it is important to get more states and cities involved by putting a monetary value on greenhouse gas emissions.

The panel further addressed many important and interesting topics, such as localized smart grids, public attitudes and hurdles to sustainable consumer products, and global energy consumption and responses. The panel concluded with a discussion from each panelist on one of the most important inventions that society will have to make and bring to scale in order to address the climate change challenge. For Dr. Baliga and Bob Perciasepe, a new source of energy is required, either through discovery or more research into already known technologies, such as nuclear fusion or wave energy. Nate Hurst discussed how the use of renewable materials in consumer products is an important step to solving this challenge. Finally, Dr. Johnson explained that the right economic incentives are required to encourage scale up of existing technologies that we know are able to work.

As USPTO Director Michelle Lee pointed out in her Keynote Speech, “a complex problem, such as this, needs a complex solution approach from all angles by many creative minds; one that embraces scientific and economic innovation.” This panel provided an optimistic and informative look at where this country is in solving this complex problem, currently being addressed by these four creative minds.