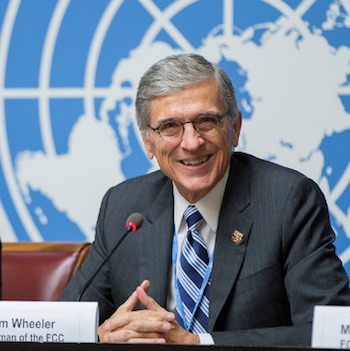 As consumers of Internet services continue to ramp up their never-ending appetite for quick access to data and multimedia content, there’s a palpable desire among those users to keep their data and Internet activities private from others. Recently, much fear over data privacy has been targeted towards Internet service providers (ISPs), the keepers of the Internet gates which provide the connection necessary to get your computer’s Internet browser operating. It’s well-known that ISPs have access to a great deal of personal data among consumers, including the Internet protocol (IP) addresses indicating which websites a browser has visited. By some reports, even encryption practices, HTTPS or virtual private networks do a poor job of keeping data and metadata private from ISPs.

These ISPs have increasingly come under the focus of the Federal Communications Commission (FCC) and the agency’s chairman, Tom Wheeler. The FCC is fresh from a major victory on its net neutrality rules which were recently upheld by the District of Columbia Court of Appeals (D.C. Cir.). That victory has now placed some momentum on data privacy rules proposed this March by the FCC, rules which would further protect ISP consumers by ensuring that their ISP sees as little of their data as possible.

The FCC’s proposed rules create an opt-out/opt-in scheme for consumers who might be uncomfortable with how the ISP uses that data, especially for advertising. If approved, the rules would allow ISP customers to opt-out of marketing schemes in which ISPs share data with third parties offering communication-related services. For any other services not related to communication, consumers have to actively opt-in to the marketing scheme to receive those advertisements. A broadband provider would be free to advertise its own services based on consumer data, such as a higher tier of service for those who stream an excess of data, as the FCC’s rules acknowledge that this is implicitly allowed by the consumer/broadband provider relationship. The rules also require swift notice of data breaches and they don’t apply to data on individual websites like Facebook or Twitter.

The rules proposal on data privacy has earned its fair share of critics, unsurprisingly from a wide swath of the ISP camp. The Cellular Telephone Industries Association (CTIA) reportedly filed a 196-page document with the FCC in late May alleging that the privacy rules give the aforementioned social media giants a huge edge as they’re still able to advertise freely. CTIA also claims that the rules constitute a breach of First Amendment rights by working as “a prior restraint on valuable speech,” according to wireless communications publication FierceWireless.

On Capitol Hill, Congressional Republicans are again claiming that the FCC is engaging in government overreach, a charge which they’ve levied against the agency after net neutrality rules were implemented. Washington political blog The Hill has also reported on FCC filings from Verizon Communications (NYSE:VZ) and AT&T (NYSE:T) opposing the privacy rules. Those telecom firms argue that these regulations unfairly heighten the obstacles preventing entry of ISPs into the valuable world of online advertising, while other Internet services are free to advertise on their websites.

We’ve recently written on the growing fortunes of those companies involved in digital advertising here on IPWatchdog. Back in April, we reported on digital advertising forecasts from PricewatershouseCoopers (PwC) predicting that digital advertising will increase from $2.4 billion in 2012 up to $3.8 billion in 2017. That 2017 figure should account for 25 percent of all advertising, according to PwC. Large Internet companies are already pivoting towards advertising as a major cash cow. This May, we reported on first quarter earnings from social media giant Facebook Inc. (NASDAQ:FB), which beat its earnings per share forecasts by 15 cents in large part because of its 57 percent year-over-year surge in advertising revenues to $5.2 billion on the quarter; 82 percent of this revenue total came from mobile ads.

The FCC’s net neutrality rules which reclassified ISPs as Title II common carriers have given the agency a new ability to leverage its regulatory authority against telecom companies. In light of D.C. Circuit’s recent upholding of the current net neutrality regime, some industry analysts believe that the FCC will continue to take action, the proposed broadband privacy rules being one part of that action. Other rules proposed by the FCC would open up set-top boxes to third-party cable providers as well as prevent zero-rating of data services, which allows consumers to access dedicated apps without being charged for data, a practice some see as unfairly favoring certain apps over others.

What exactly are American consumers getting out of the fact that the FCC is frustrating the business interests of broadband and cable companies at every turn? It’s seldom a bad thing to advocate for consumers’ rights, but as we’ve written in past coverage, that’s a regulatory authority that exists at the Federal Trade Commission (FTC), not the FCC. The reclassification of ISPs as common carriers under the Communications Act of 1934 took that regulatory authority away from the FTC.

In an opinion piece penned by Tom Wheeler and published by Huffington Post on March 10th, Wheeler couched the debate in strict terms of the rights consumers have for choosing to share their data. “Simply by using the Internet, you have no choice but to share large amounts of personal information with your broadband provider,” Wheeler wrote. “You have a right to know what information is being collected about you and how that information is being used. That’s why establishing baseline privacy standards for ISPs is a common sense idea whose time has come.”

One of the problems with using the Internet is that it will always be difficult for individual consumers to control the data they create: consider the fact that FCC’s proposed broadband privacy rules can’t prevent data and metadata creation, they simply prevent ISPs from using that data in a manner that profits those companies. There’s also a large grain of truth to the argument that these privacy rules unfairly target Internet providers in a way that tilts the playing field of the Internet services industry. Consider the example of Facebook, which we’ve previously noted is making a fortune on advertising. It doesn’t take a huge leap of intellect to realize that Facebook, as a social network, is engaged in interstate and foreign communication and could be considered a telecommunications carrier; even though it doesn’t provide the Internet connection, it enables communication on a platform over long distances. So why are ISPs common carriers while Facebook remains outside of FCC scrutiny? In the language of the 1934 law being used to frustrate Verizon, AT&T and other telecoms, “A telecommunications carrier shall be treated as a common carrier under this Act only to the extent that it is providing telecommunications services, except that the Commission shall determine whether the provision of fixed and mobile satellite service shall be treated as common carriage,” the law reads. This language comes from the Telecommunications Act of 1996, the first major update to the Communications Act of 1934.

If Facebook provides a platform for digital communications which crosses state lines, why isn’t that website a Title II common carrier? The quick answer to this would of course be that a person could choose not to access Facebook, in a way that they’re not able to choose a different ISP in most regions. However, seeing that Facebook has 1.65 billion active monthly users, dwarfing the subscriber base of every American telecom, it’s a ridiculous assertion to make that ISPs somehow have access to more data than Facebook. They might have access to a greater degree of information on an individual basis by tracking all Internet activities of individual users, but more people are creating larger stores of data on social networks and those companies are free to leverage that info for advertising revenues. Facebook might not actually sell data, but it is sharing it to increase its ad revenues.

And what exactly is so awful about targeted advertisements? They can be annoying, yes, but must they be prevented by federal regulatory action? Where were the stories of people who can’t access the data they need because their bandwidth is being choked up by ads? Wheeler’s assertions that ISPs can track medical conditions and financial situations might be true but it’s simple fear-mongering; what’s to say that ISPs couldn’t provide a potentially life-saving service in tracking that condition and alerting ambulance services to a medical emergency? These privacy rules are addressing a problem that didn’t exist and that’s a shining example of poor government. Advocates for the rights of Internet consumers may not like this assertion, but these broadband privacy rules and the larger net neutrality regime in place at the FCC will likely protect the market dominant positions of Internet services with larger subscriber bases and potentially force consumers to pay more for their Internet access in the future.