Cuozzo, Phony IPR Statistics and the Death of the American Inventor 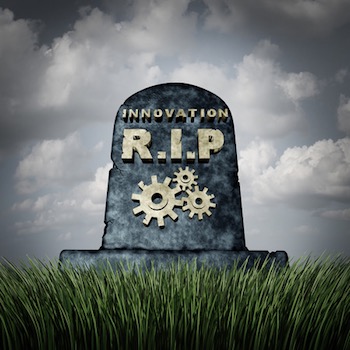 Many articles on the Supreme Court’s decision on Cuozzo Speed Technologies, LLC v. Lee suggest that the tech industry won and the pharmaceutical industry lost. I think positioning it in this context is a lie.

I won’t go into the bizarre nature of how two distinct and opposite legal procedures of invalidating the same property right have been created in the America Invents Act, and now upheld by the Supreme Court, except to provide a backdrop. Inter partes review (IPR) is the wagging tail of a political dog. It is performed in an administrative court where judges are beholden to the political whims of whoever happens to be President.

Currently, it radically favors large multinational infringers by shifting the burden to the party least able to withstand that burden. Initially, IPR’s left fewer than 5% of claims unscathed and those in the industry are openly talking about the duplicitous nature of the PTO selling patent rights and also selling the rights to take out patents. To see an example of the destructive nature of an IPR in action, see Popular Mechanic’s recent article explaining how the patent system became so screwed up.

While the Patent Office likes to tout statistics that claim most patent claims challenged in IPR are not invalidated, those statistics are viewed as bogus within the industry. They do not take into account claims patent owners simply give up on because it is too expensive to fight, and they ignore the reality that once an IPR is actually instituted virtually no claims are actually adjudicated to be patentable. 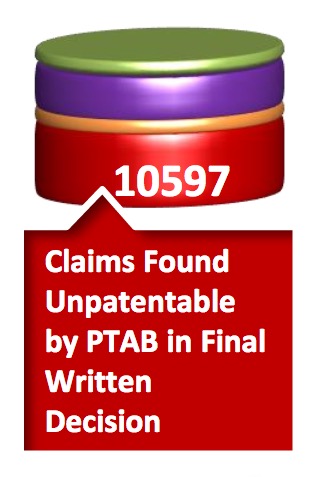 From USPTO Power Point showing IPR statistics. Data as of May 31, 2016.

For example, the USPTO and those who say IPR isn’t bad seem to like to use this graphic shown to the right (see slide 13). The red shows the number of claims found unpatentable in a final written IPR decision, the orange shows the number of claims canceled or disclaimed by the patent owner and the green, which is overwhelmingly the smallest number of claims, are the claims actually adjudicated to be patentable by the Patent Trial and Appeal Board (PTAB). The Office conveniently includes the purple chunk of claims and refers to them as “claims remaining patentable and not subject to a final written decision.” The Office can do this because the PTAB doesn’t have to issue decisions that address all claims they agree to consider. Technically those claims remain patentable, but those claims have NOT been determined to be patentable by the PTAB in an IPR. The PTAB simply ignored those claims when they wrote their final IPR decision. Hardly a ringing endorsement of the continued viability of those claims moving forward, and rather disingenuous to rely on those ignored claims to suggest IPR outcomes are not devastating to patent owners.

Any way you cut it, IPR kill rates are devastating and the cost is high. That means most contingent fee attorneys have left the patent business altogether leaving a huge swath of unenforceable patents. In effect, IPR’s transfer the property rights of the small inventors to large international corporations free of charge. There are few things more anti-American than taking the toils of the poor and giving it to rich international corporations.

If you think I’m exaggerating, here is an actual email sent this week from an independent inventor to his marketing consultant:

After careful consideration, review and thought, my current belief is that the USPTO has become a shopping mall for big business to take, without penalty, private inventors intellectual property. The Patent Office has so weakened protective laws that getting a patent may no longer make sense for people like me. That’s my conclusion, anyway. The last thing I want to do is hand my idea to someone who could out spend me in a rigged court process for the next 10 years where I would probably lose – it’s just not a reasonable plan anymore. Not trying to be negative, just realistic. It is what it is.

He is pulling his invention off the market. He is cutting his losses. This anti-American, anti-innovation America Invents Act is killing small inventors. That is just a fact. Congress and the Supreme Court believe that a cartoon character is killing innovation. They cannot be more wrong. They themselves are killing innovation.

But back to my point. The battle of Cuozzo, and patent reform in general, is not between the tech industry and the pharmaceutical industry. The battle was started by wealthy multinational tech companies led by Google who, by using their huge market and deep pockets, massively commercialize technology they did not invent to take control of emerging multi-billion dollar markets. Once a tech market is taken, it is nearly impossible to unseat the incumbent, unless, of course, you have a patent and that patent can be defended. So these huge companies bought Congress to create law that destroyed hundreds of years of patent law repositioning it against the very people who invent most of the new technologies we all use, small tech startups and inventors. Congress and the Supreme Court have now ensured that the big stay big and the small do not disrupt their highly profitable cabal with the nuisance of patent rights.

If you have any questions about who is fighting who, just look at the who’s who of Big Tech and large multinational corporations signed up on this amicus brief against Cuozzo. The list includes Google, LinkedIn, eBay, Dell, Cisco, Cannon, Toyota, JC Penny, and many other multibillion-dollar international corporations. It also includes lobbying organizations like the Internet Association, the Alliance of Automobile Manufacturers, and the National Retail Federation whose combined members make up most of the Fortune 500. There are many others, mostly international tech companies. I challenge you to identify one that is not a large corporation with an international scope.

Compare that list to the small startups and inventors who signed this amicus brief supporting Cuozzo, himself a bright young 19 year old when he invented the patent in question. These amici are inventors, inventor clubs and startups. They are the people out in their garages toiling, tooling and transforming their big idea into the next big invention. They do this in hope of achieving their version of the American Dream to invent something new that people can enjoy and so they can profit for their efforts. They are your local auto mechanic, schoolteacher, mother, entrepreneur, geek and just about any other regular American you might see on Main Street in any normal American town. They are the little people.

This battle is not tech against pharma. It is big and powerful multinational corporations led by Google against small inventors and startups. Pharma is the odd man out and stuck in the fight for other reasons made possible by IPRs, like an emerging hedge fund industry making millions from short selling their stock and then challenging their patents to an IPR in an effort to crash the stock price and collect on the short sale.

UPDATED Sunday, June 26, 2016, at 4:56pm ET to clarify that the PTAB initially was leaving fewer than 5% of claims unscathed in IPR.