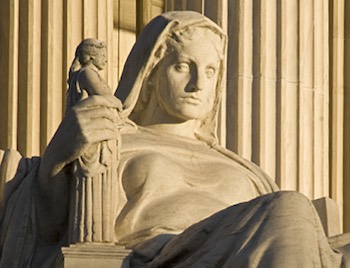 Section 284 of the Patent Act provides that in a case of infringement, courts “may increase the damages up to three times the amount found or assessed.”  35 U.S.C. § 284.  In Seagate the Federal Circuit had adopted a two-part test requiring the patentee to show by clear and convincing evidence that, first, the infringer acted “despite an objectively high likelihood that its actions constituted infringement of a valid patent,” and, second, the risk of infringement “was either known or so obvious that it should have been known to the accused infringer.”  In re Seagate Technology, LLC, 497 F.3d 1360 (2007) (en banc).

Drawing on the Court’s 2014 Octane Fitness decision, which rejected a similar two-part test for awarding attorney’s fees in patent cases, the Supreme Court found the Seagate test “unduly rigid.”  Slip Op. at 9. (citing Octane Fitness, LLC v ICON Health & Fitness, Inc., 572 U.S. __ (2014)).  In particular, the Supreme Court noted Seagate’s objective prong makes “dispositive the ability of the infringer to muster a reasonable (even though unsuccessful) defense at the infringement trial. The existence of such a defense insulates the infringer from enhanced damages, even if he did not act on the basis of the defense or was even aware of it.”  Slip op. at 10.  Because “culpability is generally measured against the knowledge of the actor at the time of the challenged conduct,” the Court found Seagate too restrictive. Slip Op. at 10.  The logic of the Supreme Court’s decision is understandable, but it will yield some challenging strategic decisions for those companies seeking to operate in an area where patents exist, as discussed further below.

The Supreme Court’s decision highlights the importance of developing the facts surrounding the accused infringer’s knowledge and intent at the time of the alleged willful infringement. Defenses to infringement developed during the litigation, but not part of an initial pre-suit clearance opinion, are a common occurrence, and even if objectively reasonable, arguably may not defeat a claim for enhanced patent damages if an accused infringer cannot show that those defenses were a consideration at the time of the infringement.  The Supreme Court’s opinion uses the word “generally” to seemingly qualify the ruling, so it will likely take further jurisprudence in the courts below to determine how hard-and-fast this rule is.  Slip Op. at 2.  According to the Supreme Court, were it otherwise, someone who “plunders a patent” could insulate himself from enhanced patent damages, “even if he did not act on the basis of the [litigation] defense or was even aware of it.”  Slip Op. at 10.  While the foregoing language, again, makes sense for pure “plunderers,” the fact patterns will almost certainly not always be so apparent.  For example, what if pre-litigation defenses turn out not quite as good as hoped, but discovery yields far stronger defenses – defenses that border on 50/50 odds of success.  Should willful infringement be acceptable in such circumstances?

Perhaps tempering the foregoing thoughts, the Supreme Court held that evidence of culpable conduct is still required, though no longer by “clear and convincing evidence.” Like in Octane Fitness, the Supreme Court rejected the heightened burden of proof standard, holding preponderance of the evidence applies.  Slip Op. at 12.   The Supreme Court emphasized, however, that enhanced damages should not be awarded in “garden-variety” patent cases.  Slip Op. at 15.  Instead, enhanced damages are “designed as a ‘punitive’ or ‘vindictive’ sanction for egregious infringement behavior . . . described in [Supreme Court] cases as willful, wanton, malicious, bad-faith, deliberate, consciously wrongful, flagrant, or—indeed—characteristic of a pirate.”  Slip Op. at 8.  Moreover, in the concurring opinion, Justices Breyer, Kennedy and Alito indicated that evidence that the infringer knew about the patent and nothing more was not what the Court meant by “willful misconduct.”  Concurring Op. at 1.  These concepts provide guidance to district courts regarding how to exercise discretion, but it seems likely that the broad contours of such language will lead to much more litigation about willful infringement issues.

In view of this decision, parties will have to carefully weigh the pros and cons of opinions of counsel as well as reliance on those opinions in litigation. Some local patent rules include a deadline for disclosing opinions of counsel that a party intends to rely on, and in jurisdictions without this rule, consideration should be given to including a date certain for those disclosures in the scheduling order.  Contemporaneous documentation, whether in the form of an opinion of counsel or otherwise, that demonstrates a good faith position prior to an infringing act or upon learning of a possible infringement, may be key evidence in the district court’s consideration of a motion for enhanced damages.

Time will tell whether or not enhanced damages are awarded more often by district courts in patent cases following the Halo decision.  After the Supreme Court’s Octane Fitness decision, awards of attorney’s fees to prevailing accused infringer’s increased significantly (about 1/3 of prevailing accused infringers in the year post-Octane were awarded fees). , Prior to Octane, however, it was all but impossible for an accused infringer to obtain fees, absent a showing of inequitable conduct or sanctionable litigation misconduct.  The same is not true of enhanced patent damages.  Under Seagate it was possible to award enhanced damages, and district courts did so.  In one of the two consolidated cases underlying the Halo decision, in fact, the district court awarded treble damages.  Slip Op. at 6-7 (discussing the procedural background of Stryker Corp. v Zimmer, Inc.).  In Halo, the Supreme Court acknowledged that “the Seagate test reflects, in many respects, a sound recognition that enhanced damages are generally appropriate under §284 only in egregious cases,” (Slip Op. at 9) and the Court emphasized the need for district courts to exercise their discretion in view of the “180 years [that] establish that [enhanced damages] are not to be meted out in a typical infringement case” but only as a sanction for egregious infringement.  Slip Op. at 8 (see also Slip. Op. at 11, “[c]onsistent with nearly two centuries of enhanced damages under patent law, however, such punishment should generally be reserved for egregious cases typified by willful misconduct.”).  Because deliberate or wanton conduct is still required, the number of enhanced damages awards may not significantly increase in the same way that fee awards to prevailing accused infringers increased after Octane.

What may change is the rate of reversal.  The Supreme Court citing Highmark Inc. v. Allcare Health Management System, Inc., 572 U.S. __ (2014) (the companion case to Octane), also altered the standard of review of enhanced fee awards on appeal. Prior to the Halo decision, enhanced damages were subject to a “trifurcated appellate review.” Slip Op. at 5.  The first step of Seagate – objective recklessness – was reviewed de novo; the subjective prong was reviewed for substantial evidence; and the ultimate decision whether to award enhanced damages was reviewed for an abuse of discretion.  Slip Op. at 5-6 (citing Federal Circuit authority).  The Supreme Court rejected this multi-part standard of review holding that whether enhanced damages are appropriate is committed to the sound discretion of the district court and “that decision is to be reviewed on appeal for abuse of discretion.’” Slip Op. at 13 (quoting Highmark at slip op. 4).  As mentioned above, in one of the two consolidated cases underlying the Halo decision, the district court had awarded treble damages.  In that case, however, the Federal Circuit had reversed the award of enhanced damages.  Applying de novo review, the Federal Circuit concluded that enhanced damages were not available because the infringer asserted a “reasonable defense” at trial.  The Supreme Court’s decision, which vacated and remanded, means that the award of treble damage may very well be reinstated in that case, and reversals of enhanced patent damages rulings – both awards and denial – may become less common.

Kara R. Fussner is a Principal with Harness Dickey. She has been litigating complex civil disputes for more than 17 years. She was part of the litigation team that defended Octane (District Court [...see more]