Technology Startups: The Game-changers of Virtual and Augmented Reality 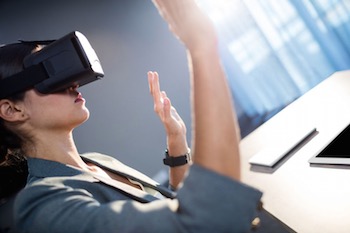 With the advent of enhancements in audio-video technology, Virtual-Reality (VR) has taken the world by storm. While VR has been enjoying most of the limelight, another similar technology – Augmented Reality (AR) is catching up fast. All major technology companies are taking keen interest in these enhanced visualization technologies. The tipping point was when Facebook acquired Oculus in 2014. Since then technology giants such as Microsoft, Sony and Samsung have also pulled-up their socks. While these companies have been gradually obtaining several patents on VR and AR, it was only in 2014 when VR and AR became serious business. According to a report published by Goldmansachs in January 2016, the combined market size of VR and AR is estimated to reach anywhere from $80B to $182B by 2025. These technologies are still in the developing phase and mostly cater to the field of gaming, multimedia and entertainment. However, the applications will expand to healthcare, education, retail and engineering design. Two of the most developing technologies – 5G wireless broadband and Internet-of-Things (IoT) – will support VR and AR just perfectly to expand to many more fields of applications.

It is an important observation that smaller companies specializing in enhanced visualization technologies and startups in this domain have been at the epicenter. Several such players are drawing huge funding from larger players and also becoming acquisition targets. For example, Magic Leap is one of the fastest growing VR/ AR startup and has raised a total of $1.42 billion including $542 million from Google.

Several already published reports and articles use VR and AR interchangeably and discuss popular acquisitions, areas of applications and major patent owners. Hence, it has become important to disambiguate VR from AR in order to clearly understand their individual pathways, future and inclination of the markets. It is also important to understand their dynamics of IP (patents) with respect to smaller players and startups. Quite obviously there have been fewer patent infringement lawsuits until now, owing to the fact that patent owners have not seen substantial incentive in going after any infringing parties in yet not-so-big a market. It is only a matter of time when strong patent owners will assert their patents on the infringing products in this growing multi-billion-dollar ecosystem.

In the following sections, I will illustrate the distinction between VR and AR and how for each, the competitive and IP landscape looks like from the standpoint of major players, startups and small players.

VR aims at rendering a computer-generated artificial environment for immersive experience. While applications in gaming and entertainment are obvious, VR will inevitably find its use in other areas such as training & skill development, healthcare and retail.

The patent landscape of VR is dominated by Sony followed by IBM, Samsung and Microsoft when it comes to total number of patented inventions. Sony has around 800 issued patents and published application (spread among 150 inventions). However, it is very interesting to note that certain players though have lesser number of inventions yet have vast geographical coverage with way more patents as compared to these aforementioned leaders. For example, LG has around 1000 issued patents and published applications in 16 countries spread among just 13 inventions. This clearly indicates that such players are trying to achieve broadest geographic IP coverage. 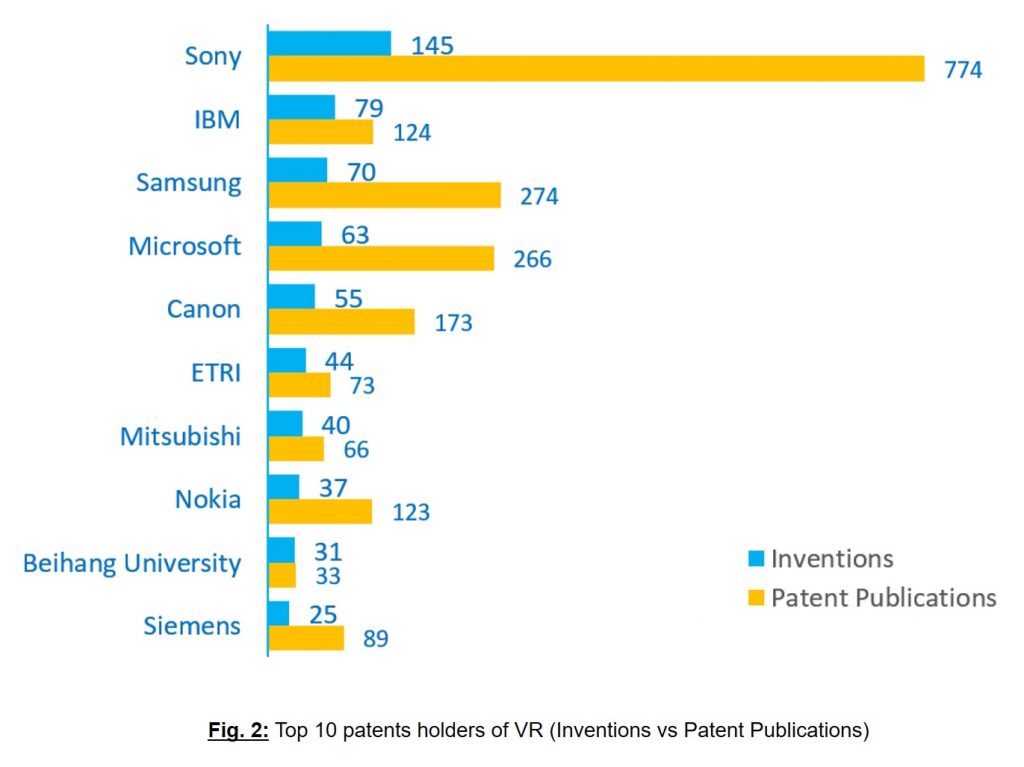 For the non-VR players, advantage clearly lies in acquiring promising startups and getting a head-start. Facebook is definitely ahead of the race. It is aggressively building a strong VR business by acquiring companies of diverse VR background. Acquiring Oculus VR for a whopping $2 billion in 2014 is quite strategic in light of the recent acquisition of Two Big Ears. Two Big Ears is a UK based startup that specializes in spatial 3D audio. Clearly, Facebook is targeting to build complete VR experience with both visual and audio rendering. Oculus VR has a small yet strong portfolio of 22 issued patents and pending published applications relating to motion sensing, video rendering, calibrating VR systems etc. Consider a VR headset design patent (USD701206S1) by Oculus which has been cited by 27 patents of which 17 are Microsoft’s. It is implicit that Microsoft is interested in similar VR headset design. 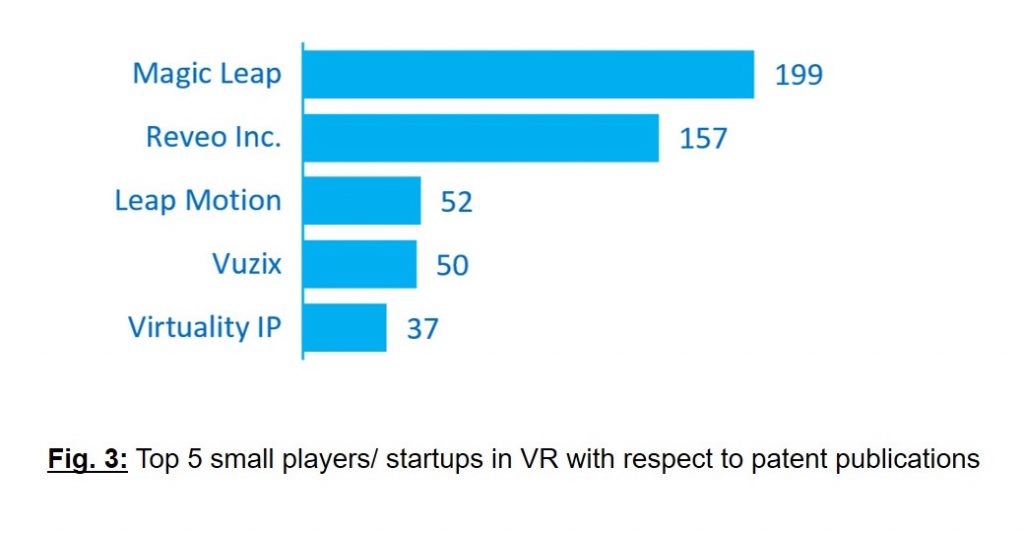 Figure 4 illustrates 5 most promising startups in the domain of VR that pose as strong contenders for acquisition if not already acquired. These have been identified on the basis of their technology specialization, funding they have secured and potential interest these are likely to create among major players interested in VR. 8i, a New Zealand and San Francisco based VR startup raised $13.5 million in October 2015 to develop a unique 3D capturing and rendering of actual persons. Vuzix, an Intel Corp. funded company, is aggressively developing AR and VR smart glasses and wearable devices.

Augmented Reality is the integration of real-world environment with computer-generated information, graphics and sound in the form of overlay. Hence, AR enhances the perception of the real-world by supplementing it with this contextual information. In a special scenario when virtual objects and real-world objects co-exist and interact with each other, it is referred to as Mixed Reality, an advance form of augmented reality.

Microsoft is the leader in AR when it comes to the number of inventions filed as patents. It has 602 issued patents and published applications distributed among 151 inventions. Microsoft is followed by Samsung, Sony, LG and Qualcomm. 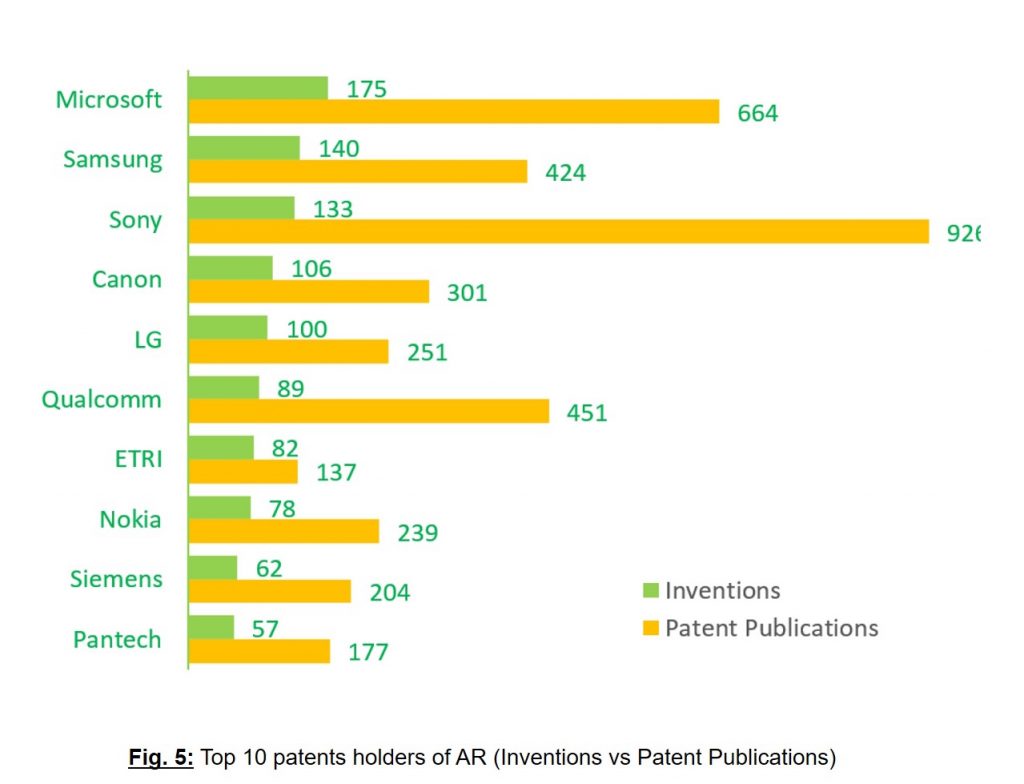 Microsoft and Google began acquiring and investing in similar startups in 2014. Microsoft acquired several AR (and MR) patents from Osterhout Group in March 2014. Osterhout Group is a heads up display and wearable computing company, specializing in AR smartglasses. It owns several patents on see-through displays and wearable computing. Magic Leap – the hottest startup in VR and AR, envisions to launch a wearable AR device that will augment a computing environment onto the real world. It has a total of 266 issued patent and published applications spread across 16 inventions. These are related to ergonomic VR/ AR headsets, spatial gesture recognition and display systems etc. Around 90% of its patents focus on AR.

Though Apple is apparently not very active in AR, it has acquired two of the strongest startups operating in augmented reality space – Metaio in May, 2015 and Flyby Media in January 2016. Metaio is an augmented reality start-up that powers popular AR applications. Flyby Media specializes in space mapping for enhanced augmented experience. These acquisitions, in light of acquisition of PrimeSense (specializes in 3D scanning) and Faceshift (specializes in motion capture) clearly indicate Apple’s strong ambitions in the domain of AR.

Since Facebook created serious ripples by acquiring Oculus VR in 2014, acquisitions, collaborations and product launches in the domain of VR and AR have flooded the news. Acquiring smaller players such as Oculus VR, Flyby Media and Metaio not only positions technology giants to accelerate towards market capture but also equips them with competitive patent portfolio. Many such acquisitions are highly likely in near future. Companies like Magic Leap, Vuzix, and 8i are few strongest contenders among others. Having foreseen strong potential in the VR/ AR market, several non-practicing entities like Searete (part of Intellectual Ventures) have already ventured into strengthening their IP in the domain of VR and AR.

The market is flooded with many companies operating in the field of enhanced visualizations. Hence, it is becoming increasingly important and time-critical to understand the technology and competitive contours from the small players’ standpoint. This will enable identification of the most promising technologies and segregation of high-value patents from the large and complex pool of patents. Custom analysis of underlying patented technologies on the basis of licensing potential will further enable aspiring companies to compete both in the market and upcoming infringement lawsuits.

The opinions expressed in this article are author’s personal opinions and do not constitute a legal advice. The author or his firm Concur IP Consulting is not involved in practice of law.

Vivek Sharma is a director at Concur IP Consulting, a leading IP consulting company providing high-end IP services to corporates and law firms. He is an IP expert with extensive experience in [...see more]