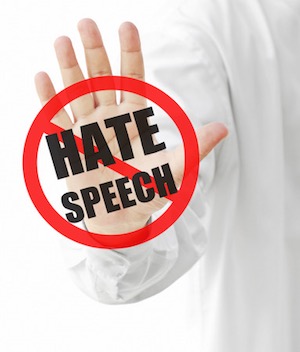 One of the truths about free speech is that when people have the ability to say anything, just about anything will be said. For better and for worse, radical forms of free speech have flourished on the Internet thanks to the ability to find either like-minded individuals who reinforce a person’s view of the world or opposing views which incite passionate responses. On the one hand, the creation of avenues for free speech in regions of the world in which they had not previously existed has given rise to progressive movements like the Arab Spring. However, some also use the anonymity afforded by the Internet to make personal attacks, sometimes on the basis of the recipient’s ethnicity or religion.

In America, the debate over hate speech versus free speech in the Internet sphere has been presented before in the halls of Congress. Back in January 2014, numerous Democrats from the House of Representatives sponsored H.R.3878, the Hate Crimes Reporting Act, which would have required governmental studies of instances of hate speech on the Internet and mobile platforms along with television and radio. Similar legislation was introduced to the Senate the same year, although neither were passed into law. Internationally, many national governments within the European Union have passed laws against hate speech and in 2015, the United Nations Educational, Scientific and Cultural Organization (UNESCO) released a publication on how to counter hate speech online.

Recently, some major American tech companies operating across the globe have publicly announced their agreement to a code of conduct developed by the European Commission and designed to “combat the illegal spread of hate speech online in Europe.” The code of conduct was signed by four U.S. tech firms: Microsoft Corporation (NASDAQ:MSFT) of Redmond, WA; online streaming video service YouTube, a subsidiary of Alphabet Inc. (NASDAQ:GOOGL) of Mountain View, CA; Twitter Inc. (NYSE:TWTR) of San Francisco; and Facebook Inc. (NASDAQ:FB) of Menlo Park, CA.

The code of conduct, to which these tech companies have promised the European Commission their online services will adhere, stipulates that the companies have to establish a couple of processes that target the elimination of hate speech. These include processes for reviewing notifications related to hate speech found on their services and eliminating such hate speech in a period within 24 hours of the initial notification. Facebook et. al. are also charged with training staff on recent societal developments as well as promoting “independent counter-narratives” to reduce the impacts of xenophobic, racist or other forms of hate speech which exist in the world.

It’s easy to understand why Europe, still only decades removed from the spectre of the Holocaust and dealing with rising signs of racism related to the current Middle Eastern migrant crisis, would be much more willing to curb what can be said in public than we are here in America, where free speech is our first right as citizens. This is, after all, the country where Strom Thurmond sat in the House of Representatives for nearly 50 years. But on the subject of legislating morality, some honest questions could be raised as to whether the European Commission’s goal of eliminating hate speech from the Internet is one that can actually be accomplished by Facebook and the social media giants.

The definition of hate speech used in the European Commission’s code of conduct is codified by an act adopted into the European Union Treaty in November 2008, the Council Framework Decision 2008/913/JHA. According to the commission’s code of conduct, that act defines hate speech as “all conduct publicly inciting to violence or anger directed against a group of persons or a member of such a group defined by reference to race, colour, religion, descent or national or ethnic origin.” The issue here is that this is a very broad definition which can be contested. The UNESCO document cited above even acknowledges this, stating that “hate speech lies in a complex nexus with freedom of expression, individual, group and minority rights… Especially at critical times, such as during elections, the concept of hate speech may be prone to manipulation.” So Facebook and others looking to clean up the online world have, in one sense, agreed to a legal construct in which today’s political dissent could be tomorrow’s hate speech.

Anyone who might find this shifting legality of speech rights to be troublesome can take some solace in the fact that Facebook rarely accomplishes anything when it tries to mix politics and business. Here at IPWatchdog, we’ve been covering Facebook’s inability to make good on certain promises in recent weeks. For instance, Facebook CEO Mark Zuckerberg promised this January to ban sales of weapons on its flagship social network service. Unfortunately, Forbes and others followed up on this story in the months after Zuckerberg’s pledge and found that people were still leveraging Facebook to conduct illicit sales of weapons. We also found reports from Business Insider which showed that rates of kidnappings and extortion in Mexico spiked and continued to grow in the months after Facebook enabled wide public access in late 2006.

The recent reports of censorship of conservative viewpoints on Facebook’s Trending News also underlines the inability of Zuckerberg to follow through on grand proclamations. Despite assurances from the company that it doesn’t engage in the active suppression of political viewpoints, multiple publications conducted interviews with former staff members speaking on conditions of anonymity and those stories painted a picture of a toxic work environment with little oversight where personal biases could thrive.

So although Facebook, Twitter and others have landed a really nice photo opportunity with the European Commission, it’s reasonable to doubt how effective this anti-hate speech measure will actually be. It’s also interesting to note that this anti-hate speech pledge comes with two weeks of a lawsuit filed against Facebook, Twitter and YouTube by a French Jewish youth group alleging that the online services provided by these companies did not effectively monitor hate speech. It will be very interesting to see if more such lawsuits target these companies in the future, effectively marking the measure of how successful these tech giants are at cleaning up the online world.

Helping Facebook detect hate speech for removal is a new artificial intelligence system known as DeepText. According to Facebook, DeepText is capable of analyzing the content of several thousand posts every second in more than 20 languages. According to multiple news reports, this type of AI system should be useful in identifying hate speech without waiting for notifications of such speech from other social network members.

The plan is not without its critics, however. An article published by the American Bar Association in the winter of 2013 notes that, although Europe’s governmental regime is more sensitive to group libel than America’s, social media providers have been moving towards European standards on speech which are unenforceable in America. The technology news publication WIRED published a piece after the announced hate speech ban which noted how the global nature of social media made such a ban untenable, “because one person’s hateful propaganda could be another’s free speech.” The executive director of the PEN American Center wrote an editorial published June 3rd by The Washington Post which voiced concerns about the growing criminalization of speech throughout the world as the definition of “hate speech” continues to broaden and becomes conflated with hate crimes.