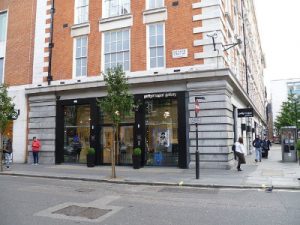 Google, the Internet software and services arm of Alphabet Inc. (NASDAG:GOOGL), offers a tremendously valuable portal to the wider Internet through its flagship search engine service. One of the more popular aspects of Google’s search engine is the image search features; as of July 2010, Google’s image search was delivering one billion pageviews per day to the company and 10 billion photos had been indexed. Google also operates a reverse image search service which allows users to input an image and search for similar images on the Internet.

Internet search engines are a major industry and Google is always interested in finding new ways of monetizing its lofty position in the field. In May, it was announced that the company would begin including product ads in image search results to attract more advertising investment from retailers. As image search delivers more traffic to Google, however, referral traffic to outside websites has slipped. After an image search upgrade in early 2013, a study released by audience development firm Define Media Group surveyed 87 websites and found that they experienced an average decline of 63 percent. Websites offering entertainment, fashion & lifestyle, news and photo content saw the most serious declines with some sites losing 78 percent of referral traffic from Google image search. The most drastic decline occurred in the week that Google released the upgrade, which would keep a browser on Google’s site when an image was selected instead of loading the image’s website in the background. Google has explained in the past that such drops in referral traffic are the result of removing inaccurate page visits, or so-called “phantom impressions,” and that real website traffic was increased by the tweak.

In recent weeks, Seattle, WA-based stock photo agency Getty Images has filed a complaint with the European Commission which charges Google of using its market dominance to promote piracy of photos online. Getty’s gripe also goes back to changes made by Google in 2013, when it enabled browsers to view high-resolution image thumbnails on Google’s image search; before, browsers had to go to the image’s website to view any high-resolution photos. With the immediate consumption of high-resolution content, browsers have no incentive to visit the content’s original source. The complaint is filed under existing European competition laws and alleges that Google’s action hurts the image licensing business of Getty, affecting 200,000 of its own photographers, as well as other online content providers. “Artists need to earn a living in order to sustain creativity and licensing is paramount to this; however, this cannot happen if Google is siphoning traffic and creating an environment where it can claim the profits from individuals’ creations as its own,” Getty’s general counsel Yoko Miyashita said in statements issued through a Getty press release on the matter.

Google’s business activities have been increasingly targeted by European regulators in recent years. Last August, we reported on actions taken by France’s data protection agency to apply the “right to be forgotten,” a legal concept which had taken shape in the European Union’s court system, to force Google to remove certain search engine listings from its worldwide searches, including those through Google’s U.S. domain. This May, Google filed an appeal to the Commission Internationale l’Informatique et des Libertes (CNIL) charges, arguing that the application of French law beyond French borders creates a complex global regulation regime.

Search engine practices are not the only Google activity receiving scrutiny by European regulators. This April, EU antitrust authorities sent a statement of objections to Google accusing the company of using its market-dominant position to impose restrictions on device manufacturers and mobile network operators using the Android system. The European Commission is mainly targeting the fact that Google Search the exclusive default search on Android devices, preventing rival search engines to access the market. Other antitrust and taxation issues have dogged the company in the EU since regulators there began focusing on Google back in 2010. A 2016 estimated published by The New York Times indicated that Android enjoyed a 76.9 percent market share for mobile operating systems in Europe, slightly less than its worldwide 83.1 percent mobile OS market share.

An interview with Getty’s Miyashita conducted and published by professional photography magazine Photo District News helps explain why Getty, an American company, is pursuing another American company in a foreign court system. Miyashita acknowledged that, although there are obvious copyright issues involved in the case, the EU has legislation which specifically protects publishers. Although Getty could take on Google on copyright issues in American court, Google has resources to carry on years of litigation which Getty doesn’t have. In America, Getty has been involved with a study being performed at the U.S. Copyright Office which is looking at the effectiveness of Section 512 of the Digital Millennium Copyright Act (DMCA) which governs the cooperative identification of copyright infringement between copyright owners and Internet service providers.

In 2014, Getty launched a new image embedding tool that makes it possible for its photos to be widely shared on the Internet in non-commercial blog posts. Commercial entities can also use the embed tool to license images for republication. In its press release on the complaint against Google, Getty noted the use of the embed tool as a legal alternative to “right click” sharing by crediting the content creator and tracing a clear path between the image and Getty.

Despite the charges filed by Getty in the EU, the company hasn’t completely shut its doors from doing business with Google. A post published May 19th on Google’s developers blog indicated that platforms for mobile virtual reality systems currently under development will benefit from recent partnerships made with both Getty and the Associated Press. Both of those companies will provide VR content for Google’s Expeditions program, an educational program which uses Google’s Cardboard VR platform to let students explore more than 200 locations in virtual reality.

Google’s continuing development of tweaks to its image search service could be an indication of its confidence in the service and the company’s continued ability to operate it freely despite Getty’s charges. This summer, Google began adding filter buttons to all image searches which suggest terms for filtering image results based on the initial search query. Google continues to add digital imagery to its flagship text search engine. In late May, online SEO publication Search Engine Land reported that Google began displaying image thumbnails culled from recipe websites when users search for meal recipes. It would seem to an outside advisor that, were Google to ever begin displaying recipes from websites as search results, that would be akin to Getty’s charge that Google’s image search throttles its own traffic. Google already does this with song lyrics stock ticker information; a search for “American Pie lyrics” will pull up Don McLean’s lyrics from Google Play while a search for “IBM stock” pulls up an interactive chart of the stock’s performance on the New York Stock Exchange, all without leaving the Google domain. As of March 2014, Google was taking more than two-thirds of all online search queries originating in the U.S. Given the importance of Google to Americans’ access of the wider Internet and the need for user traffic to improve advertising revenues for many websites, Getty’s charges appear to have serious implications which might extend beyond its image search.