Supreme Court to Weigh in on Damages for Design Patent Infringement 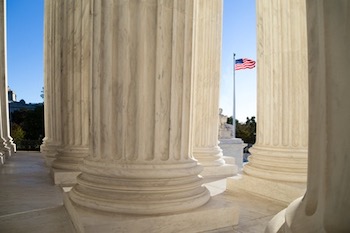 Recent decisions from the U.S. Court of Appeals for the Federal Circuit regarding damages available in design patent cases highlight the court’s divergence from its damages jurisprudence in the utility patent context – specifically, the lack of an apportionment requirement between patented and unpatented portions of an infringing product. While this may make design patents increasingly desirable, the Supreme Court’s decision to review the issue now raises the possibility that the discrepancy will be resolved.

A patent holder who successfully sues for infringement is entitled to compensatory damages not less than “a reasonable royalty for the use made of the invention by the infringer.” 35 U.S.C. § 284. An additional statutory provision specific to design patents provides for damages in the amount of the infringer’s “total profit” on the infringed “article of manufacture,” not less than $250. 35 U.S.C. § 289. Section 289 makes clear that while it does not preempt the patent holder’s other statutory remedies, the patent holder cannot “twice recover the profit made from the infringement.” Accordingly, a party who has secured a judgment for infringement of its design patent has two options for recovering damages: (1) seek its own lost profits or a reasonable royalty under § 284, or (2) seek the infringer’s total profits (or the $250 statutory floor) under § 289.The choice will almost always skew towards the latter option as a result of the different approaches the Federal Circuit has adopted to calculating lost profits (or a reasonable royalty) under § 284 and calculating profits gained from infringing products under § 289.

Under Federal Circuit precedent, a party seeking damages for design patent infringement under § 289 may obtain the infringer’s profits from the whole product that contains the infringing design. The court analyzed this issue in Nike, Inc. v. Wal-Mart Stores, Inc., a case concerning a patent for the design of an athletic shoe. Affirming an award of all profits from sales of the infringing shoe, the court reviewed the history of design patent remedies and the early cases that prompted design patent-specific legislation in the 1800s.The court determined that the design patent-specific legislation was enacted to remove “the need to apportion the infringer’s profits between the patented design and the article bearing the design.”

The Federal Circuit recently reiterated its holding and rationale in two additional decisions, bringing renewed attention to the issue of damages for design patents. Most notable is the court’s decision in the closely watched Apple Inc. v. Samsung Electronics Co. (2015) smartphone case. In that case, Apple successfully secured a damages award for infringement of three of its design patents. Each patent claims an element of the design of Apple’s iPhone – specifically, they respectively claim: (1) the design of the “graphical user interface,” or icons on the display screen; (2) the flat-contoured front face of the phone and “bezel” around the face; and (3) the “flat, continuous and edge-to-edge transparent black front surface.” Despite the discrete aspects of the iPhone encompassed by each design patent, the jury awarded damages for Samsung’s entire profits from the smartphones found to infringe.

Samsung was unsuccessful in its post-judgment motion challenging this award, with the district court finding its position “clearly foreclosed” by Nike and Federal Circuit precedent (see the Apple Inc. v. Samsung Electronics Co. (2013) decision from the Northern District of California). Samsung appealed the damages award, arguing (1) that “basic causation principles” require that damages be limited to that portion of its profits actually attributable to the design patent infringement, and (2) that the awarded profits should be limited to the infringing “article of manufacture” rather than the entire product. The Federal Circuit rejected both arguments as imposing an impermissible requirement that the profits be apportioned. In its decision, the court cited Nike in support of the proposition that Congress had rejected such a requirement in enacting design patent-specific legislation, and further found that § 289 “explicitly authorizes the award of total profit from the article of manufacture bearing the patented design.”

Similarly, in Nordock, Inc. v. Systems Inc., the Federal Circuit vacated a damages award calculated by the jury as a reasonable royalty, reiterating its previous holding that “apportioning profits in the context of design patent infringement is not appropriate.” Clarifying the interplay between § 289 and § 284 in design patent cases, the court advised that “[o]nly where § 289 damages are not sought, or are less than would be recoverable under § 284, is an award of § 284 damages appropriate.”

The design patent at issue in the Nordock case claims the “ornamental design of a lip and hinge plate” for a dock leveler (a large mechanical device used to bridge loading dock surfaces and the surfaces of truck beds). The design of the lip and hinge plate consists of different-shaped lugs that are secured to both the “lip” (the portion that extends) and the “hinge” (the portion that attaches to a frame). In rejecting apportionment, the court emphasized that there was no evidence that the infringing party sold the lip and hinge plate as a stand-alone unit, separately from the dock leveler. Interestingly — and perhaps telling of future trends with respect to the prevalence of design patent cases — the court noted that the patent holder had applied for utility patent protection for the “lug hinge design,” but that its application had been rejected over the prior art.

Charlene Morrow is a partner in the Litigation Group with Fenwick & West. She has over 20 years of experience representing information technology and life sciences companies and has a nationwide trial [...see more]

Sapna Mehta is an associate in the Litigation Group with Fenwick & West. She focuses her practice on a broad variety of litigation matters to support clients in the high technology and [...see more]