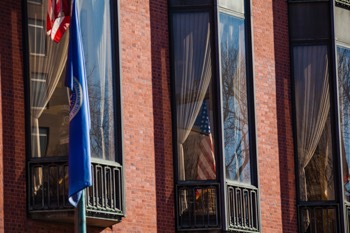 Permobil filed a petition for Inter Partes Review (IPR) of two patents owned by Pride Mobility on a configuration of caster wheels for a powered wheelchair allowing it to traverse obstacles such as curbs. In particular, the patents covered a wheel system wherein the front casters of the wheelchair are attached to a pivoting arm which pivots about a point below the axis of the main drive wheels. Claim 7 of one of the patents further required a “substantially planar” mounting plate “oriented perpendicular” to the axis of the wheelchair’s drive wheel.  Permobil argued that all claims of the two patents were obvious over several combinations of prior art.  The Patent Trial and Appeal Board (Board) instituted an IPR on all claims of both patents.

At trial, Permobil argued that the “Goertzen” reference taught a wheelchair for traversing obstacles, and numerous other references taught chairs with pivots located below the axis of the main drive wheels, which in combination would result in the claimed invention. Pride Mobile’s expert argued that a person of ordinary skill would not have combined the references, because placing a pivot point below the axis of the main drive wheels would make the chair unstable. Permobil’s expert replied that there were numerous ways to adjust stability that were well-known in the art. The Board agreed with Permobil, and cancelled all claims of the two patents.

The Court summarily affirmed the cancellation of all other claims, finding that the Board had sufficient evidence to find that there was motivation to combine the asserted references. Further, the Board reasonably found that a person of ordinary skill would have known how to compensate for any stability issues caused by locating a pivot point below the axis of the main drive wheels.

Also contributing to this summary were Lindsay Henner, Parker Hancock, and Puja Dave.