The Rise of Emoji

Let’s start with a question. Can you decode the following sequence of images?

The well-known proverb, popularized by Benjamin Franklin, is one you may be more familiar with in text form: Early to bed and early to rise makes a man healthy, wealthy and wise.

If you couldn’t answer, you are not alone. Teenagers and young adults worldwide (and thus predictably enough, tech companies) are enamored by the ‘emoji’ phenomenon now. So much so, that ‘Face with Tears of Joy’ (technically an ‘emoji’) was selected Oxford Dictionaries 2015 Word of the Year.

Oxford Dictionaries defines emojis as ‘a small digital image or icon used to express an idea, emotion, etc., in electronic communication’, and if you have been following Oxford Dictionaries’ annual announcement, you would know that ‘Vape’ was the winning word in 2014, ‘Selfie’ in 2013 and ‘Sudoku’ (UK) / ‘Podcast’ (US) way back in 2005, terms which are all part of popular culture now. 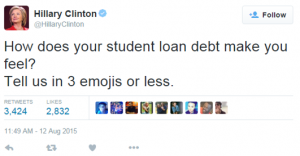 Millions of people, from talk show hosts to world leaders, have engaged in a dialog about and with emoji and what it means to communication. They are becoming an increasingly pervasive communication instrument, which is increasingly used in advertising, to discuss social issues and advocacy, and to even a bridge communication tool between generations. 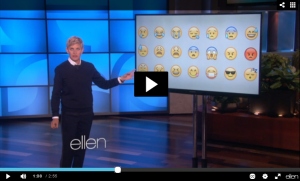 Ellen DeGeneres was an early adopter among celebs and discussed emoji in her show back in March 2014. Emoji literally rocked the world scene in 2015. For example:

Not all related news has been positive, however. A South Carolina man was arrested in June after he sent threatening emoji over Facebook Messenger. The emoji-only social network Emojli, closed its doors in July. And in November, SportsCenter courted controversy when it tweeted camcorder and football emoji as a possible commentary on a call made in an NFL game.

So, How did it all start?

The origins of the term itself stem from the Japanese language. “? (e ? picture) ? (mo ? writing) ? (ji ? character)”. These articles from The Verge and Ignition explain the origins of emoji in more details and how they became so popular. Shigetaka Kurita, a former employee of the Japanese telecommunications company, NTT DoCoMo, is credited as the inventor. At DoCoMo, Kurita sought a tool to simplify communication while simultaneously adding an emotional context typically absent from electronic communication. Kurita set to work, drafting the first 172 or so emoji himself in just 10 days. 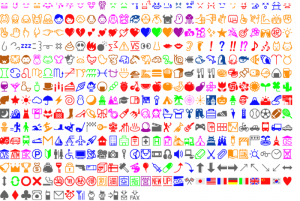 How do they Work?

So, How popular are they?

Data from Google Trends alerts us to the gradually increasing popularity of the term. 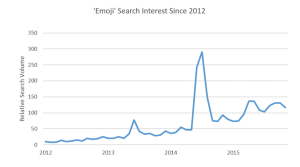 Companies such as Venmo and Domino’s currently use emoji associations with variety of services. Venmo enables users to lend money to each other using their phones, primarily for minor transactions like paying for pizza, drinks, or for rent sharing by roommates. Domino’s allows users to tweet a ‘pizza’ emoji to a Domino’s Twitter handle to initiate a pizza order. Others like Slack, Twitter and Facebook are experimenting with reactions, which allow users to provide simple feedback in the form of an emoji.

Emojis are also growing in relevance in the patent industry. Our research indicates that by the end of 2015, at least 105 US patent applications mention the term, 28 of which have already been granted. Within the first 10 weeks of 2016, another 5 patents referencing the term have been issued by the USPTO. The assignees for these patents and patent applications include well known technology companies Apple, Google, Facebook and Microsoft, and more niche players like Meemo and Mach Zone. 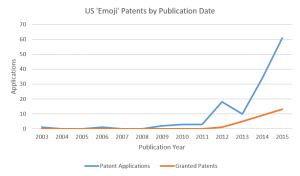 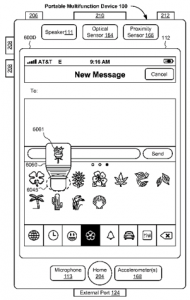 Meemo, a licensing, marketing and distribution company, was granted a patent, titled “Word recognition and ideograph or in-app advertising system” (US 9152979), relating to emoji prediction in the context of advertisement. The Meemo patent describes a system where a ‘smiley face’ emoji is predicted when a user supplies the word “happy” to an application. 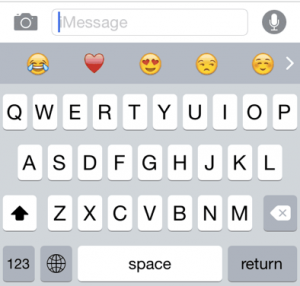 Other predictive emoji is also available in mobile keyboard apps like Emoji Type and SwiftKey, which harness the ability to predict characters natively. SwiftKey, for example, advertises the ability to suggest a pizza emoji as auto-completion for the text “pizz”. Pairing the auto-completion feature with prediction may introduce more users to emoji or provide a convenience for frequent users.

As tech companies back their emoji use cases with intellectual property protection, we are likely to see transition towards more emotion based applications, and maybe some patent lawsuits. In one such lawsuit in Nov 2014, Apple was ordered to pay $23.6 million in damage to Mobile Telecommunications Technologies. Though technically not an emoji-only patent infringement lawsuit, jury did deliberate on whether or not emoji constitute a message covered by the Plaintiff’s patent(s). The plaintiff later went on to sue several other companies, including Samsung, Google and Microsoft alleging infringement of the same set of patents and some of those cases are still ongoing. If you know of other patent lawsuits involving emoji, please let the authors know.

Many commentators have speculated on the future with an overwhelming consensus: this trend is here to stay. Emojis are attention grabbing, and an Experian study concluded that more than half the brands they tested experienced a higher open rate when symbols were used in the subject line. Another A/B split test by Swiftpage showed that several metrics (unique open, unique click and click through rates) for newsletter subscribers who received emails with symbols in subject line showed positive improvements over those whose subject lines only had text. This NYTimes article goes over some 2016 emoji predictions, including an emoji-agency and augmented reality with emoji. We clearly see rising interest in use cases based on patent filings. And with surveys like this finding links between dating lives and usage, emoji phenomenon is sure to attract more users.

Kalyan Banerjee is a Source Code Expert and a Patent Monetization consultant to law firms and corporations. As the Director of Delivery at iRunway, a patent research and consultancy firm with offices [...see more]

Mitchell Taylor is a technical consultant for iRunway, a patent research and consultancy firm with offices in Austin, Bay Area, Denver and Bangalore. He has a degree in Computer Science from Texas [...see more]