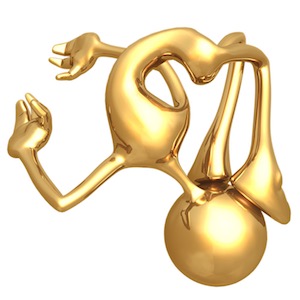 Patent attorneys darn near need to be magicians when it comes to language, which is the primary tool of our craft. Picking the right word and the right way to say things is critical. Even more critical, perhaps, is not saying the wrong thing, or worse yet saying something that is clear but not what you intended.

Today I thought I would focus on a couple big-ticket matters that are easy to overlook, at least when patent novices are doing the drafting.

A Thesaurus is a Powerful Tool

When dealing with the topic of picking and using the right language to describe an invention in a patent application it is worth observing that having access to both a dictionary and thesaurus is an absolute prerequisite to being a good drafter. Indeed, if you are not consulting a dictionary and thesaurus you are doing yourself, or your client, a tremendous disservice. By using a thesaurus and then checking definitions you will be far more capable of coming up with the precise language you need to both best describe the invention (or aspects of the invention) and distinguish the invention from the prior art.

Of course, picking the right word is but one of the problems, and probably the easiest to deal with if you train yourself not to assume you have a Shakespearean grasp of the English language and actually do force yourself to consult that dictionary and thesaurus.

If you actually heated the dough to between 400° F. to 850° F., as the patent stated, the resulting output would approximate a charcoal briquette, but that wasn’t the Federal Circuit’s problem. The words chosen had a specific and undeniable meaning and, therefore, a charcoal briquette was unfortunately what was protected; at least unfortunately from the patent owners perspective.

There are some that will tell you that the use of the term “invention” or “present invention” in the specification will limit the claims. The reality is that there is nothing wrong with using the term “invention” or the phrase “present invention.”  Moreover, the belief that avoiding those terms inoculates a disclosure from insufficiency issues is a simplistic view of what the law really says; so simplistic that you could actually follow the rule and still fall prey to the problem the rule is trying to help you avoid.

It is true that the Federal Circuit has said: “[w]hen a patent thus describes the features of the ‘present invention’ as a whole, this description limits the scope of the invention.” Verizon Service Corp. v. Vonage Holdings Corp., 503 F.3d 1295, 1308 (Fed. Cir. 2007). This, however, is a far cry from saying the use of the word “invention” or phrase “present invention” will import limitations into the claim or otherwise limit the scope of claims. The absolutist view that these terms are wrong or dangerous misses the point entirely.  The reality is that if you inartfully describe the invention to narrowly then you are stuck with that limited articulation.

Still, because of the nature of language and how easy it may be to mistakenly limit yourself by careless, unintended use of the terms “present invention” or “this invention,” patent professionals may want to avoid the terms altogether and that is fine. Just know why you are avoiding them and that by avoiding the terms you are not necessarily automatically expanding the disclosure. You still need alternative versions of the invention in the specification to support those claims you will want later.

Another big problem relates to describing too much in the Background of the Invention is also problematic. If you do such a good job describing the state of the prior art in the Background the patent examiner may conclude that the only logical next step would be what you did and, therefore, you do not have an invention at all. By relying on your wonderful explanation of the prior art in your own patent application the patent examiner may find your invention obvious in light of what you described. This has become an even bigger issue thanks to KSR v. Teleflex, which brought us the so-called KSR Rationales for obviousness. Today obviousness is all about predictability, so if you do an outstanding job explaining the prior art the patent examiner could easily conclude that the solution achieved was quite predictable. For that reason, generally speaking the Background should ordinarily be quite short and to the point.

Don’t call it Prior Art

When the specification identifies work done by another as “prior art,” the subject matter so identified is thereafter treated as admitted prior art. For example, a statement by an applicant in the specification (or made during prosecution for that matter) identifying the work of another as “prior art” is an admission that can be relied upon by the patent examiner for both anticipation and obviousness determinations, regardless of whether the admitted prior art would otherwise qualify as prior art under 35 U.S.C. 102. Although this is frequently a problem in the Background, it can really be a problem anywhere. There is no need to refer to anything as “prior art” in a patent application.

Patent attorneys ordinarily focus on a positive description of the invention, focusing on what has been invented from a structural, mechanical standpoint. Positive descriptions are not without their own perils though. It is certainly true that alternatives are the drafter’s friend, but being careful with how things are conveyed is mandatory. Description of a variety of alternatives will expand the disclosure, providing greater opportunity for the patent owner to achieve broader coverage. But language choices throughout the patent application must be carefully considered.

With alternatives you always want to make sure you are using the right qualifiers. For example, if what you are describing is really an alternative and not something that is mandatory stay away from the words “critical,” “essential” or any synonyms. In fact, you want to stay away from these absolute terms unless what you are describing is in all circumstances mandatory. Generally speaking, you are better off using such absolutely language sparingly, if at all. You can always add things introduced as optional or permissive into the broadest independent claim, thereby making them mandatory for that claim set at least. But introducing something as mandatory in the specification does not give you the option of removing it from the broadest independent claim, so you get locked in.

What I refer to as “experimental language” either explicitly or implicitly suggests that further experimentation is or will be necessary in order to: (1) realize or perfect the invention; or (2) realize or perfect an intermediate or component.   Resist the temptation to have your patent application read like a diary of thoughts, a scientific journal detailing how and why you did certain things, and/or personal observations regarding future research and goals.  This type of language is usually not found in a patent application because it suggests that your invention is not yet completed, which could be used as an admission that the invention is not enabled and/or that you have not satisfied the written description requirement.

In patent history, Samuel Morse (of Morse Code fame) ran into a written description problem when he tried to claim electromagnetism for whatever purpose later developed.  Truthfully, Morse had one particular use of electromagnetism, not all possible uses that may later be developed, so he was given a patent on the implementations he described with certitude.  If you are not in full possession of what you are articulating then you are hypothesizing, theorizing or just flat out guessing.  You cannot get a patent on a hypothesis, theory, guess or incomplete invention.  So be careful how you articulate what you have and what you don’t have.

The moral of the story is this: No court or judge will save you from poor drafting.

So how do you prevent yourself from saying too much about an invention, minimizing what you have done with respect to your invention and otherwise putting your foot in your mouth?  Try and consider how someone who is unfamiliar with the invention would read what has been written.  If the reader would be left with the understanding that there is more left to be done in order to realize or perfect the invention, you are treading on thin ice.  Similarly, if you are using absolute language you are likely painting yourself into a corner unnecessarily.