Ted Cruz has much in common with Abraham Lincoln, thanks to patents 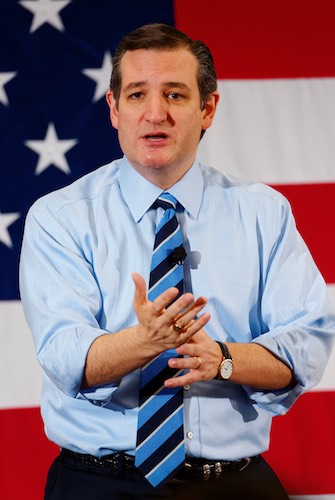 Senator Ted Cruz has already used private property rights to distinguish himself from other candidates, turning to a tried and true conservative concern over the government seizing private land. There is no doubt that in certain Republican circles eminent domain remains a political flashpoint. While Cruz has in the past supported eminent domain for national security purposes, the contrast between Cruz and Donald Trump on this issue may help the debate include another property rights issue, patents.

Cruz was born to a struggle of private property rights. His father Rafael was born in Cuba and fled to the US to find a better life. His mother Eleanor was born in Wilmington, Delaware and went to Rice University to escape a future as a secretary and to become a computer programmer. Eleanor and Rafael founded a seismic data processing startup in the oil patch of Calgary, Alberta, Canada. As anyone familiar with the Castro Revolution in Cuba can attest, when Fidel Castro came to power the government seized homes, businesses and factories (see here and here), paying little or nothing to those who had their property taken. So deep is the animus that more than 56 years later Cuban exiles and their decedents are still angry and still want their property returned.

More recently, Cruz as a young US Senator, has been active on patent litigation reform legislation as a member of the Senate Judiciary Committee. During the committee’s markup of S.1137, the PATENT Act, on June 4, 2015, Cruz openly told his colleagues he was voting against the bill as it threatened property rights and the Constitution but that he could support it later on if certain changes were made. Cruz has earned a reputation for not getting along with his colleagues. Yet during this markup Cruz overtly complimented Senator Dick Durbin (D-IL) for his work in opposition to the patent bill, calling his arguments “powerful and persuasive,” and voted with Durbin against the bill. Speaking without reading any notes, Senator Cruz told his colleagues:

There are legitimate and serious issues on both sides of the debate. There are legitimate and real concerns about litigation abuse. Litigation abuse is a problem that exists in many sectors, many industries, and certainly the world of intellectual property is one of those where we have seen an escalation in litigation abuse and I commend the bill authors for working in a bipartisan manner to address that. At the same time, I will say that I found Senator Durbin’s remarks quite powerful and persuasive. We have in our economy a particular obligation to protect inventors, to protect the little guy who is inventing the next great invention that will transform the world that we don’t know what it is, we don’t know where it might be going, and yet it represents a threat to the status quo, a threat to giant corporations of today because they are in their garage starting the company that will become the giant corporation of tomorrow. I recognize that the authors of this legislation have worked to balance those concerns, and in private practice before I was in the Senate I litigated cases on both sides of patent matters, both on behalf of defendants and on behalf of plaintiffs asserting intellectual property. At the end of the day, at least in Committee, I’m going to vote against this legislation, but I think it is a close call, and I may well be open to supporting it on the floor depending upon what amendments are considered, but I think we need to be particularly solicitous of protecting inventors, protecting the little guy, protecting those who are asserting the rights protected by the United States Constitution to develop new innovations and I fear that if we lean too far against the small patent holder that in turn will hamper innovation in our economy. I appreciate everyone’s productive discussion on this.

This hearing was Chaired by the senior Senator from Texas John Cornyn (R-TX) who led the bi-partisan fight in Congress to overturn and cure the Supreme Court’s very unpopular 5-4 decision against Ms. Kelo, the property owner. Cornyn, however in contrast to Cruz, is a major champion of S.1137. How Cornyn and Cruz may get along on patents on a national stage is an open question especially when they seem to agree on the problems caused by government takings of private property.

Much of the controversy today about the US patent system is about the growing risk of government taking of private property, which is why looking at the parallel eminent domain debate offers potentially interesting clues.

The Patent Trial and Appeals Board (PTAB) created in 2011 by the Leahy-Smith America Invents act (AIA) has been criticized by a federal judge as a death panel. A widely respected corporate patent department head has openly questioned whether PTAB proceedings are fair and afford patent owners even basic due process rights. Cases heading to the US Supreme Court are openly challenging the legitimacy of the PTAB and the inter partes review (IPR) and covered business method (CBM) review proceedings created by the AIA and managed by PTAB.

Cruz is not new to patent disputes. He put food on the table for his family as a practicing lawyer by winning a patent case for the patent owner at the US Supreme Court. Cruz had to work while running in a multi-candidate primary contest against the wealthy, self-funded Lt. Governor David Dewhurst.

In fact, US Supreme Court Justice Kagan, former Solicitor General for President Obama, openly agreed with Cruz during oral argument in Global-Tech v. SEB with regard to his views on willful infringement by a Chinese knock-off manufacturer that had copied a french fry safety innovation created by a French company. The copied product was cheaper than the one sold by the patent owner and American retailers, so to some extent an argument could have been made that consumers benefited from cheaper fried potatoes. But at what cost to America?

The race to the bottom view on price and getting a bargain is part of America’s consumerism culture. But at what expense for other, perhaps more important rights that form the fabric of our country? If innovators cannot reap rewards from inventing they simply cannot justify the time and expense it takes, which means less innovation, not more. Pretty soon, as innovators are squeezed out by lower priced knock-off products that directly compete but which do not have to recoup sunk costs associated with inventing, there will be nothing left to copy. Cruz understands this, which is why he explained to his Senate colleagues that making the patent laws disadvantageous for innovators will hamper innovation.

In 2011 the Supreme Court agreed with Cruz 8-1 and with his willful blindness theory in Global-Tech. This week the Justices were arguing with each other and the parties in the dual cases of Halo and Stryker on willful infringement by “bad faith” infringers or patent pirates. Yes, there is abuse of the patent system by patent owners. Congress has been deliberating reforms of such abuses for over 20 years now. But as the abuses of eminent domain by well connected companies and investors have lit up the debates so too it seems that the litigation games conducted by those that ignore legitimate patent owners request for a license are ripe for debate. This is a very real problem. See here, here, here and here, for just a few examples of the pirates and bullies threatening patent owners.

Cruz had other professional experiences involving patents. While serving as Director of the Office of Policy and Planning at the U.S. Federal Trade Commission from 2001-2003 he was involved in the drafting of what eventually became the FTC’s seminal patent reform report in 2003, which along with the National Academies report of 2004 encouraged Congress to dive back into patent reform only a few years after the American Inventors Protection Act of 1999. While Cruz had left the FTC before the patent reform report was completed and published it is worth noting that he did have other overt acts on patents while at the FTC. He filed an amicus brief in Buspirone a pharmaceuticals cases involving the Noerr-Pennington doctrine. He also gave a speech at the National Press Club for the Federalist Society on the intersection of patents and antitrust.

Given the amount of resources expended by the government, enterprises and individuals on creating and enforcing intellectual property rights and the rising importance of patents in the global economy the experience Cruz has in this complex field of law and economics is impressive and unique.

For Ted Cruz, his depth of sincere appreciation and awareness of the role patents and private property rights comes from his meager roots, from his work as an attorney in private practice for commercial clients, and working for the people of Texas as their Solicitor General and on cases involving eminent domain and intellectual property. If the 2016 Presidential race were simply a one issue contest Cruz would certainly enjoy a substantial advantage.

But since the 2016 race is defined by personality then it is worth noting how much Ted Cruz has in common with Abraham Lincoln, thanks to patents.

Just as Ted Cruz used patent litigation to fund his Senate campaign, Lincoln funded his Congressional and Presidential campaigns on patent lawsuits. The Macon Daily Telegraph December 30, 1907 article Battles of the Reaper Kings. Lincoln’s Candidacy the Result of Reaper Patent Wars” provides a useful sketch of Lincoln the lawyer defending property rights. Those today that talk up the smartphone patent wars as something new and unique to today’s headlines about trolls and software patents ignore the fact that the 1800s and early 1900s were rife with many patent wars, often involving more litigation than we even see today. See Robert Henry Parkinson, The Patent Case That Lifted Lincoln into a Presidential Candidate, Abraham Lincoln Quarterly 4 (September) 1946: 105–122.

Lincoln’s first career in real estate ended when he became frustrated with the unclear boundaries of land grants, poor use of surveying technology to mark property borders, and the special interests influencing clerks at court houses and government offices. He was able to navigate the complexities of patent claims of the emerging technologies of the day. Lincoln, of course, was an inventor and patent owner himself, although he never practiced or commercialized his lifting boats over river shoals innovation. As President, Lincoln invited inventors to come to Washington, DC, to display technologies that could help end the Civil War sooner. And Lincoln’s statements on invention and individual freedom before and during his Presidency illustrate how patents and the motivation for human discovery illustrate the link Lincoln made between intellectual property and free labor. To Abraham Lincoln, the patent system was one of the three greatest innovations of all time, as he explained in his Second Lecture on Discoveries and Inventions, February 11, 1859.

Ted Cruz obviously has big boots to fill when being compared to Lincoln. But at least on the one issue of patents it is hard to see how others running for the White House can measure up.