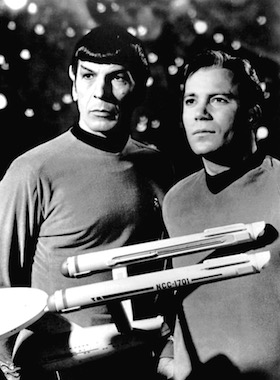 Star Trek, the science fiction entertainment franchise first developed by Gene Roddenberry, has done an unparalleled job in forecasting human innovation decades before it comes into existence on its own. The food replicator, which fed the crew of the USS Enterprise has inspired recent innovations into meal preparation devices by Swiss food and beverage company Nestlé (VTX:NESN), as well as Israel-based White Innovations. A computer’s ability to process natural language queries to respond to voice commands, a common computer interface used throughout the Star Trek series, presaged technologies which are currently in widespread development, such as the Watson cognitive computing platform developed by IBM (NYSE:IBM). And it’s not hard to find a real-life example of the personal access display devices (PADDs), handheld computing devices with large touchscreens and one or two buttons on a control panel, used by Starfleet crew members.

Now transparent aluminum seems to be a reality as well.

Our story about this recent technological advance starts with a futuristic material that played a prominent role in one of the major motion pictures released for the Star Trek franchise. In Star Trek IV: The Voyage Home, crew members of the USS Enterprise — Mr. Scott and Dr. McCoy — trade the formula for transparent aluminum, a material with glass-like transparency while offering aluminum’s strength and density, to a 20th century company called Plexicorp in order to construct a whale tank for bringing humpback whales to the movie’s original setting, 300 years into the future. (see clip below, and if you want to get to the main part of the scene skip ahead to the 2 minute mark)

According to an April 2015 press release from the U.S. Naval Research Laboratory (NRL), scientists may have discovered the secret to creating a material much like transparent aluminum 30 years after the chemical formula was fictionally bestowed upon Plexicorp. Ten years of research at the NRL has led to the development of spinel, a material with the transparency of a pane of glass but with improved characteristics of strength and durability. The material, which NRL researchers intend to spin off for industrial applications, could be used to create tougher smartphone screens, camera lenses or even armor for military vehicles and face shields. The material is transparent to both optical light and infrared light, making it useful for infrared imaging systems as well.

Spinel is also known as magnesium aluminate, which is why it has been likened to transparent aluminum. Developed by NRL researchers, spinel is formed through a process known as sintering, whereby a large number of crystal particles are pressed together in a hot press while in a vaccuum, getting rid of entrapped air and leaving behind a clear polycrystalline material. Spinel precursors are Earth-abundant and are therefore cost-effective. The breakthrough which made NRL researchers capable of forming spinel through a sintering process, which had not been previously possible, was the incorporation of a process which uniformly coated spinel particles with lithium fluoride (LiF), a sintering aid, reducing the amount of LiF required for densification. Prior to NRL’s recent advance in spinel production, spinel produced through sintering processes would retain an opaque quality, reducing its optical transparency. Before the NRL made sintering a feasible process for creating spinel, scientists previously were forced to form spinel by melting a starting powder in a crucible at incredibly high temperatures, as hot as 2000°C. At those temperatures, the molten material can interact with the crucible and create impurities in the finished spinel. 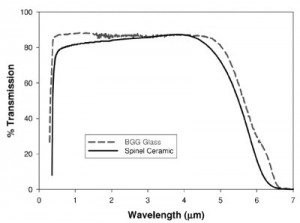 There is a patent issued by the U.S. Patent and Trademark Office protecting a process involving sintering for creating spinel and listing Dr. Jas Sanghara, a lead researcher identified in the NRL press release, as an inventor. U.S. Patent No. 9067819, titled Spinel-Germanate Glass Composite as an IR Window, protects a spinel-germanate glass composite which has visible and IR transmission, has a higher modulus than glass and comprises a glass matrix having dispersed spinel particles providing a mechanism for crack deflection resulting in high performance and wherein the spinel-germanate glass composite was processed near the glass softening temperature. The composite is formed at temperatures about 40 percent lower than glass melting temperatures and 50 percent lower than spinel sintering termperature.

Before this discovery, spinel has found its greatest application in the jewelry world. Perhaps the most famous example of this is the Black Prince’s Ruby, a storied gemstone with a supposedly cursed history going back to the 1300s which includes cameo appearances at the famed Battle of Agincourt in 1415 and a fire at the Tower of London in 1841. Spinel is very valuable as a gemstone and a September 2015 auction saw the 50.13 carat Hope Spinel sell for about $1.5 million to a private bidder.

One of the many proposed applications for the NRL’s new spinel formulation is for the development of next generation (NEXTGEN) lasers. Researchers at the NRL have been involved with the creation of high-efficiency ceramic lasers going back to at least 2011, when researchers at the organization demonstrated such a laser for use in military and civilian applications. Solid state crystal lasers such as this have been sought after for their light weight as well as their ability to be used in compact applications. Interestingly, the ceramic material developed by NRL scientists for use in these lasers was also formed through a sintering process. Spinel can serve as a high quality material for covering exit apertures but it’s very important that the spinel be formed without impurities so that laser light isn’t absorbed. The Earth-abundant materials also mean that spinel can replace other materials formed by doping chemicals with rare Earth ions, reducing the cost of production.

There are plenty of military applications for a transparent, tough material like spinel. For instance, spinel could be used to form bulletproof glass which is much thinner than the layered glass and plastic panels in use now, many of which reach five inches in thickness. The same qualities of toughness and transparency which makes spinel such a good fit for NEXTGEN lasers also gives it applications in space satellites, where they could be utilized for protecting sensors from the harsh environment of space.

Transparent aluminum found many applications on the USS Enterprise and many other Starfleet vessels. According to information reported on Star Trek technical manuals, the material was incorporated into a variety of Starship fittings, including windows and exterior ship portals. In an episode of the television series Star Trek: The Next Generation titled “In Theory,” Data scans the transparent aluminum of the Enterprise to determine that the ship and its crew are being affected by spatial deformations in subspace. Trekkies all over the world should be quite happy to see that the entertainment franchise has once again touched the world of actual scientific and technological development in a way that midi-chlorians never really could.