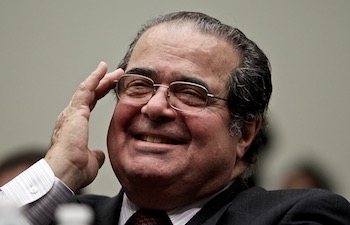 On Saturday, February 13, 2016, Justice Antonin Scalia of the United States Supreme Court passed away in a hotel room in Texas. Justice Scalia was nominated by President Ronald Reagan to fill the vacancy left by Justice Rehnquist when he ascended to the role of Chief Justice. Confirmed on September 17, 1986, Antonin Scalia served on the Supreme Court for nearly thirty years.

The Impact of Scalia’s Passing on Patent Law

With Justice Scalia’s passing some have started to already wonder what his absence will mean for a variety of different cases and issues. With respect to intellectual property, not much will change (if anything) as the Supreme Court moves forward to consider a number of patent and other intellectual property cases this term and in future years.

While Justice Scalia served on the Supreme Court for nearly three decades, his contributions to the area of intellectual property law were quite limited. Scalia did famously refer to patents as “gobbledegook” during the KSR v. Teleflex oral arguments. Scalia was the only Justice not to sign onto an opinion in Bilski v. Kappos that would have recognized that at least some software is patent eligible. But Justice Scalia did not author any of the major patent decisions considered by the Court during his tenure. Furthermore, the major patent and trademark decisions considered by the Supreme Court over the last generation have for the most part been unanimous, or near unanimous decisions. Intellectual property is not an area where the Court divides ideologically, so we do not generally see 5-4 splits as are seen in many other areas of law.

For example, the three recent patent eligibility cases that have thrown the industry into something of a tailspin were all unanimous decisions — Mayo Collaborative Services v. Prometheus Laboratories, Inc. (2012); Association for Molecular Pathology v. Myriad Genetics (2013); and Alice Corporation v. CLS Bank (2014). The Supreme Court also reached unanimous decisions in eBay, Inc. v. MercExchange, LLC (2006)(ruling that a victorious patent owner does not have a right to a permanent injunction and that the court must consider the four-factor injunction test despite the fact that a patent grants an exclusionary right to the patentee); and KSR International v. Teleflex, Inc. (2007)(fundamentally changing the obviousness inquiry by ruling that teaching, suggestion and motivation is not the only rational to combine references to support an obviousness rejection). Although not all agreeing on the reason, all of the Justices participating in the case also agreed in Microsoft Corp. v. i4i Limited Partnership (2011) that the presumption of validity bestowed upon a patent by 35 U.S.C. 282 requires an invalidity defense to proved by clear and convincing evidence. Finally, in Octane Fitness, LLC v. ICON Health & Fitness, Inc. (2014), a virtually unanimous Supreme Court ruled that the rigid framework crafted by the Federal Circuit to authorize the awarding of attorneys fees was inconsistent with the statutory text and that district courts should be given broad discretion to award attorneys fees pursuant to 35 U.S.C. 285. Of particular interest with respect to the Octane Fitness decision, it was not completely unanimous because Justice Scalia did not join in footnotes 1-3, all of which related to discussion of legislative history.

Notwithstanding the reality that patent decisions are generally unanimous decisions by the Supreme Court, Inc. Magazine has published an article suggesting that the death of Justice Scalia will have an impact on the Court’s consideration of Halo Electronics v. Pulse Electronics. Simply stated, there is absolutely no chance that the absence of Justice Scalia will have any impact on this case, and frankly it seems rather silly that someone would suggest otherwise.

The single issue accepted by the Supreme Court in Halo is as follows:

Indeed, Sections 284 and 285 of the Patent Act are constructed virtually identically. In making the errant interpretation of Section 285 in Octane Fitness, the Federal Circuit relied on Professional Real Estate Investors, Inc. v. Columbia Pictures Industries, Inc. (“PRE”), 508 U.S. 49 (1993). In no uncertain terms the Supreme Court explained that the Federal Circuit was mistaken in their understanding and application of PRE. This same exact mistaken understanding and application of PRE is at the heart of Federal Circuit jurisprudence relating to the awarding of enhanced damages under Section 284. Absent the Supreme Court completely ignoring their own ruling in Octane Fitness from just two years ago, the outcome in Halo is clear. It seems virtually certain that the Supreme Court took Halo to grant district courts discretion to award enhanced damages. Given that Octane Fitness was another virtually unanimous decision of the Supreme Court, the presence or absence of Justice Scalia will matter not for Halo.

Thus, the passing of Justice Scalia does not seem likely to have much of an impact on intellectual property cases, particularly patent cases. Having said that, there is a potential that the absence of Justice Scalia may have some impact when the arguments being offered relate to legislative history. Most notably, the America Invents Act (AIA) was passed in September 2011 with a long and cumbersome legislative history, which Justice Scalia would never have considered himself and certainly would have lobbied against considering.

Before the Court this term is a case where that could matter depending upon the arguments made and the direction the Court wishes to take with its decision. I could see legislative history becoming more relevant than anyone would have anticipated just a week ago when the Supreme Court considers Cuozzo Speed Technologies v. Lee. See Supreme Court accepts Cuozzo. For example, at issue on some level will be post grant procedures authorized by the AIA and conducted by the Patent Trial and Appeal Board (PTAB). Throughout the legislative history these post grant procedures are characterized as an alternative to district court litigation on the issue of validity, but the Patent Office applies different standards than would a district court, including no presumption of validity. Arguments of the petitioner tied to legislative history may get greater consideration given the absence of Justice Scalia.

The American Intellectual Property Law Association published a brief piece pointing to eight majority opinions and one dissent authored by Justice Scalia in intellectual property related cases. Three of the cases related to trademarks and two of the patent cases related to constitutional issues.