Canon already with more than 300 patents in 2016, pursues plastics and photoacoustic imaging tech 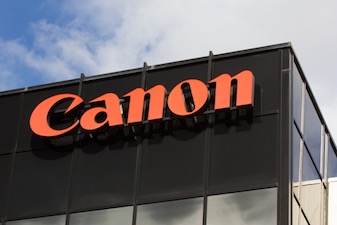 Canon Inc. (NYSE:CAJ) of Tokyo, Japan, is a multinational corporation focused on the development and manufacture of optical and imaging tech products, including copiers, printers, cameras and medical equipment. Canon might not grab the same media attention as Silicon Valley darlings Alphabet Inc., formerly Google (NASDAQ:GOOG), and Apple Inc. (NASDAQ:AAPL), but it consistently outperforms those two at the U.S. Patent and Trademark Office. Recent reports indicate that Canon ranked third among all companies receiving U.S. patents during 2015 with 4,134 U.S. patents earned last year. This is the same position the corporation held in 2014 when it earned 4,172 patents from the USPTO, trailing only perennial front-runner IBM (NYSE:IBM) and second-place Samsung Electronics Co. (KRX:005930)

Recent financial projections pertaining to Canon released by brokerage firms indicates that analysts expect earnings per share to increase by 12 cents over the coming year. The company is making an executive shakeup, promoting from within by naming Masaya Maeda, a veteran of the corporation’s digital camera division, as company president, replacing Fujio Mitarai who will remain as chairman and CEO of the company. Canon has been active in promoting its digital camera products to consumers through programs 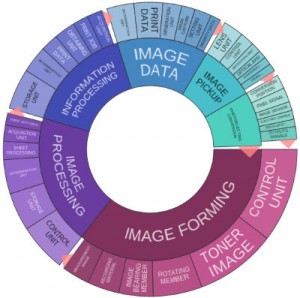 like The Lab, a series of creative experiments involving Australian photographers. Canon is also a sponsor of the 2016 Sundance Film Festival and notes in a press release that more than 20 percent of the movies showing at Sundance were shot using the company’s camera equipment.

Canon has earned 578 U.S. patents in just the past two months leading up to this writing. The text cluster provided here, available thanks to Innography’s patent portfolio analysis tools, shows us some consistent development in imaging technologies, including image forming, image processing, image data and image pickup. There are also substantial activities devoted to information processing and photoelectric conversion. 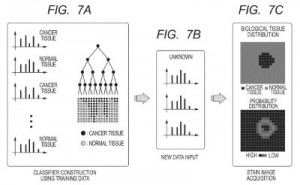 Our latest survey of patents issued recently to Canon include a couple of imaging technologies related to medical diagnostics, such as is the case with the imaging innovation outlined within U.S. Patent No. 9230319, entitled Method of Reconstructing a Biological Tissue Image, and Method and Apparatus for Acquiring a Biological Tissue Image. It protects a method of reconstructing an image of a sample through the use of multiple measured spectra obtained by measuring respective regions of the sample; the method involves acquiring an image through utilization of an intensity distribution in the regions of at least one peak in each of the measured spectra as well as a classifier. This technique is useful in the examination of biological tissues to determine the presence of cancer.

Improvements to retinal imaging techniques are at the center of U.S. Patent No. 9226659, issued under the title Fundus Camera. It discloses an ophthalmic apparatus including an illumination optical system that guides light from a source to a fundus, a light blocking member that blocks at least a portion of the light emitted from the source, an imaging unit capturing an image using light returned from the fundus through a photographic optical system, a light metering unit that changes a light metering area within the image based on a position and size of the light blocking member and a controlling unit that controls an amount of light toward the fundus through the blocking member based on a light metering value. This innovation improves the accuracy of light amount control in fundus cameras when a subject has a small diameter pupil or the light blocking member of the camera has been changed. 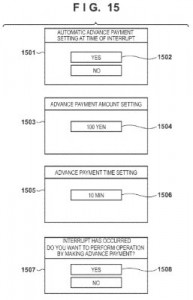 An interest in improving commercial printing services is underscored by the technology protected by U.S. Patent No. 9235369, titled Mobile Information Processing Terminal and Method Therefor, and Non-Transitory Computer-Readable Storage Medium for Charging Payment of Unprinted Portion of a Print Job. It discloses a mobile information processing terminal including a communication unit for performing short distance communication and a processor executing a program stored in the memory to transmit a print job to a printing apparatus based on communication from the communication unit, set a time period which movement outside of a range of communication with the printing apparatus is allowed, transmit an advance payment request and the set time period to specify a number of paper sheets printable and execute payment processing of an amount requested by the printing apparatus with respect to an unprinted portion of the print job. This innovation addresses shortcomings in using electronic payment systems implemented through smartphones for the payment of printing services, especially if the smartphone travels outside of the range of the mobile terminal before printing is finished. The better detection of issues in image forming apparatuses which utilize unfixed toner images transferred onto a recording medium is discussed within U.S. Patent No. 9135182, entitled Fixing Device Capable of Detecting Wrap Jam of Recording Sheet and Image Forming Apparatus. It claims a fixing device with a fixing unit to fix a toner image on a recording medium, a first temperature-detecting unit detecting the temperature of the fixing unit in an area where the recording medium passes, a second temperature-detecting unit detecting the temperature of the fixing unit in an area where the recording medium doesn’t pass, a temperature difference-comparing unit to compare the two temperatures and a control unit that controls heating of the fixing unit, generates a signal based on temperature abnormalities and stops heating of the fixing unit. This innovation is intended to prevent differences in temperature on different regions of a fixing belt don’t cause wrinkles to be generated on a recording sheet.

We’re always interested to see robotics inventions coming out of the R&D activities of the world’s most innovative companies, which is why we took a closer look at U.S. Patent No. 9221176, entitled Robot System and Method for Controlling the Same. The robot system protected here includes a robot body with an articulated arm supporting an end effector, a visual sensor and a control apparatus that controls a position and orientation of the robot body and calculates a position and orientation of a workpiece via the visual sensor. This robotic system is an imaging innovation which allows a robot to approach a workpiece by using the visual sensor to determine more accurate coordinates. 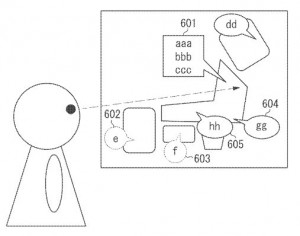 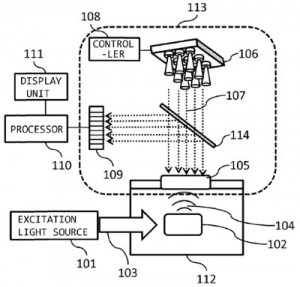 Taking a look at Canon’s recently filed patent applications, we found a number of very intriguing imaging technologies such as the photoacoustic technology laid out within U.S. Patent Application No. 20150369651, which is titled Acoustic Wave Acquiring Apparatus and Control Method Therefor. It would protect an acoustic wave acquiring apparatus having an array light source with a plurality of elements that emit measurement light, a controller that controls a wavelength of the measurement light for each element, a Fabry-Perot interferometer including a first mirror upon which the measurement of light is incident and a second mirror upon which an acoustic wave from a subject is incident, an optical sensor that measures a quantity of reflected light produced by the reflection of the measurement light by the mirrors and a processor that acquires an intensity of the acoustic wave based on a change in the quantity of reflected light. This invention is intended to address a shortcoming in photoacoustic imaging devices used in medical fields when variations occur in the polymer film thickness. An invention designed to reduce noise in radiation imaging is featured within U.S. Patent Application No. 20150378034, titled Radiation Imaging Apparatus, Driving Method for the Same, and Non-Transitory Computer-Readable Medium. The radiation imaging apparatus claimed here includes a plurality of sensors and a driving unit to drive those sensors, each sensor having a radiation detection element, a sampling unit that samples a signal from the detection element and a reset unit that initializes the detection element; the driving unit performs a number of output, reset and sampling operations. This technology is advantageous in preventing noise causing unevenness in a radiation image when a frame rate is increased.

A printing composition that exhibits excellent environmental stability is at the center of U.S. Patent Application No. 20150361205, entitled Method for Manufacturing Resin Particles and Method for Manufacturing Toner Particles. It discloses a method for manufacturing resin particles containing a resin having an ionic functional group and a target acid dissociation constant (pKa), the method involving producing the resin particles by using a liquid which is prepared with the resin, an organic solvent to dissolve the resin, water and a neutralizer in an amount effective for neutralizing a certain amount of ionic functional groups. The resulting toner particles have good characteristics for maintaining charge stability in high humidity environments.

Technologies for conducting financial transactions have been cropping up all over the tech world so it’s perhaps not too surprising to see Canon filing U.S. Patent Application No. 20150372993, filed under the title System and Method for Processing Transactions. The method that would be protected involves receiving a request to access a web page including elements for receiving sensitive information when displayed, generating a security token including information for determining whether the token is expired and sending to the web page the security token embedded in that page, which is sent to another server through an inline frame. This innovation is designed to streamline the practice of processing transactions when multiple payment processing systems, including e-commerce systems, are utilized. 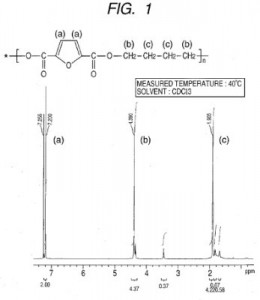 Canon is not typically considered a major innovator in plastics manufacturing, which is why we were piqued to see U.S. Patent Application No. 20160002395, entitled Polymer Compound and Method of Synthesizing the Same. It would protect a liquid vessel comprising a molded article comprised of a particular polymer compound and a liquid contained by the molded article. The invention results in a plastic developed from renewable biomass sources which has improved mechanical strength for applications in electric and electronic components.

This digital camera maker is still focused on developments in film, albeit not always for photography, as is evidenced by U.S. Patent Application No. 20150367613, which is titled Porous Film. It claims a porous film having a first layer made of a porous fluororesin at a thickness of 20 micrometers or less and a water resistance; a second layer of the film which maintains an average distance between local peaks. This invention is meant to overcome issues in film used to filter dust from a gas or liquid, which can be affected by film deformation or a decrease in air permeability. 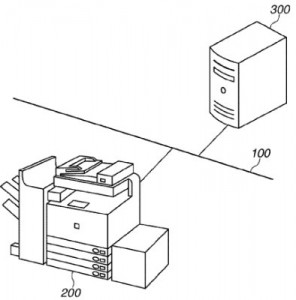 Finally, we know that Canon is heavily invested in image capturing but we noted an interesting technology in the field of image sending found within U.S. Patent Application No. 20160011822, entitled Image Sending Apparatus and Authentication Method in Image Sending Apparatus. It discloses an image sending apparatus having memory devices storing instructions executable by processor to receive a password, perform processing for first authentication using the password to allow to set a sending method from multiple options, store the password upon successful authentication, set a destination for sending the image data based on the sending method, determine whether to use a stored password as a password for a second authorization required to send the image and processing the second authorization with or without the stored password based on the determination. The technology results in an efficient method for authenticating a user who is attempting to send an image to a shared network folder that has password security measures.