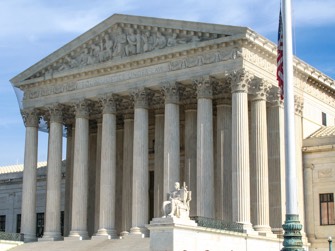 Nearly 30 years have passed since this Court last applied Article III Separation of Powers principles to declare the authority of Congress to empower an executive agency to adjudicate a private dispute. More recently in a non-agency context, in Stern v. Marshall, 131 S. Ct. 2594 (2011), Justice Scalia’s concurring opinion questioned the “multifactors relied upon today [that] seem to have entered our [public rights] jurisprudence almost randomly.” Id. at 2621 (Scalia, J., concurring). The two other Stern opinions (majority and dissent) have all members of this Court expressing dissatisfaction with the clarity of Article III public rights jurisprudence: either it “has not been entirely consistent,” id. at 2611 (majority), or preceding cases “do not admit of easy synthesis.” Id. at 2624 (dissent) (citation omitted). Congress continues to pass laws against this murky backdrop, risking inappropriate expansion of the administrative state.

The question presented in the petition for certiorari in Cooper v. Lee is whether 35 U.S.C. §318(b) violates Article III of the United States Constitution, to the extent that it empowers an executive agency tribunal to assert judicial power canceling private property rights amongst private parties embroiled in a private federal dispute of a type known in the common law courts of 1789, rather than merely issue an advisory opinion as an adjunct to a trial court.

This case raises a constitutional challenge to new post-grant patent proceedings. The Supreme Court has just granted certiorari to review statutory and discretionary matters within such proceedings. See Cuozzo Speed Tech’s v. Lee, No. 15-446 (cert granted January 15, 2016). It stands to reason that the Court should, in addition, analyze constitutional validity. The Supreme Court could decide to hear the two cases together, the one raising smaller issues (Cuozzo) alongside the one raising larger issues (Cooper v. Lee). That would secure a more complete vetting of administrative agency authority.

Confusion over the Supreme Court’s Article III “public rights” jurisprudence reached its apex with Cooper v. Lee. The lower court here endorsed a spectacular anomaly. Congress may now delegate authority to an administrative tribunal to determine the validity of private property rights amongst private litigants embroiled in a private federal dispute of a type with clear historical antecedents dating back to 1789. Under the lower court’s decision, the “judicial power” is no longer reserved to Article III courts, unless a state law claim is in play. Under that reasoning, if Congress swoops in to regulate an area, the Separation of Powers question is decided in the negative at the moment Congress does regulate it, irrespective of whether it “originate[s] in a newly fashioned regulatory scheme or possess[es] a long line of common-law forebears.” Granfinanciera, SA v. Nordberg, 492 U.S. 33, 52 (1989) (citation omitted). Countless decisions of the Supreme Court direct otherwise.

In this case, the Court of Appeals for the Federal Circuit rejected a constitutional challenge to inter partes review, a process in which employees of the United States Patent and Trademark Office (the “Patent Office”) convene an adjudicatory tribunal to conduct a trial and decide whether to cancel (i.e., invalidate) previously issued and fully vested private patent rights. Patent validity adjudications – even stand-alone invalidity petitions brought in the absence of an infringement counterclaim – existed in the common law courts since before the Founding. This is precisely the type of adjudication that Congress cannot place before an agency without conflicting with Supreme Court precedents.

Never before has the Supreme Court, nor any court of appeals, approved such a deviation from Separation of Powers principles. No previous court has ever approved delegating validity-determination authority over common-law-adjudicated property rights to a non-Article III decisionmaker. The very fact that the lower court believed itself to be faithfully applying this Court’s latest “public rights” pronouncements indicates how deeply this area of law is in disrepair and how desparately necessary Supreme Court elucidation is on this important issue. Absent clarification, almost nothing remains of the high walls the Supreme Court has occasionally had to invoke to prevent Congressional encroachments on the Judicial branch.

Most obviously, the lower court’s decision directly conflicts with the Supreme Court’s long-standing precedent relating to agency actions affecting patents for both invention and land. See, e.g., McCormick Harvesting Mach. Co. v. Aultman-Miller Co., 169 U.S. 606 (1898). The Supreme Court should review to confirm that final adjudications of patent validity may only occur in Article III trial courts because patents are property rights, and those property rights are expressly authorized by the Constitution itself. Indeed, on numerous occasions during the nineteenth century the Supreme Court unambiguously said that a patent for either invention or land, once issued, is private property that has left the authority of the granting office. See United States v. Am. Bell Tel. Co., 128 U.S. 315, 358-59 (1888)(comparing Art. I, § 8, para. 8, with Art. IV, § 3, para. 2 and reasoning, “The power . . . to issue a patent for an invention, and the authority to issue such an instrument for a grant of land, emanate from the same source, and although exercised by different bureaux or officers under the government, are of the same nature, character and validity . . . .”); James v. Campbell, 104 U.S. 356, 358 (1882)(“[a] patent confers upon the patentee an exclusive property in the patented invention which cannot be appropriated or used by the government itself, without just compensation, any more than it can appropriate or use without compensation land which has been patented to a private purchaser.”); McCormick Harvesting Mach. Co. v. Aultman-Miller Co.,169 U.S. 606 (1898)(“The only authority competent to set a patent aside, or to annul it, or to correct it for any reason whatever, is vested in the courts of the United States, and not in the department which issued the patent.”)

However, this is not to say that the Supreme Court must abolish the inter partes review process as a whole. Rather, this Court may make the process constitutionally sound by doing what it has always done under these circumstances: make the outcome of inter partes review advisory and subject to de novo treatment in an Article III trial court. So corrected, inter partes review may still identify and appropriately target “junk patents,” though an Article III trial court will need to perform the final act of striping a property right that is statutorily required to be presumed valid; a presumption not afforded by the Article II tribunal at the Patent Office despite the clear language of .35 U.S.C. 282, which mandates a presumption of validity for issued patents.

More deeply, this case presents a rare chance to clarify the Court’s public rights jurisprudence, especially in the context of agency delegations. This significance extends beyond the patent system. Congress presently lacks clear guidelines on how it may, and how it may not, delegate decisionmaking powers to administrative agencies without offending the Constitution. Litigants caught within questionable tribunals are equally at sea in knowing whether and how to challenge them. And as this case shows, the lower courts, believing themselves to be applying this Court’s precedents, have reached absurd results. If something so obviously a “private right” under Article III jurisprudence, i.e., a private dispute with roots in the common law courts of 1789, may be denominated a “public right” in order to shoehorn it into some of the less rigid statements by this Court about Article III, then something is wrong with this Court’s past Article III guidance. The way forward lies in unambiguously reaffirming that the Stern v. Marshall “historical antecedents” test is a threshold question that applies not just to bankruptcy contexts, and not just state law, but to Congress’s delegation of agency authority and to federal law issues as well.

These arguments have been made in a petition for certiorari to the United States Supreme Court, which was filed on Thursday, January 21, 2016. Those wishing to file an amicus brief urging the Court to take this case will have at least until February 22, 2016 to file a brief.

Robert P. Greenspoon is a founding member of Flachsbart & Greenspoon, LLC. He is a registered patent attorney who concentrates his practice in the trial and appeal of patent cases involving computer and [...see more]