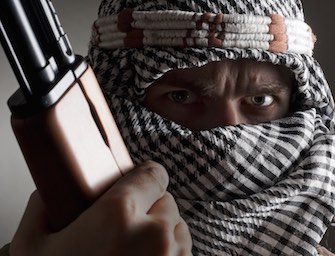 The recent cinematic launch of Star Wars: The Force Awakens was heralded by the introduction of new, highly sought-after, branded Star Wars merchandise to tantalize fans and further consolidate the franchise’s reach. This holiday season, not surprisingly, the most popular gift toys included the app-enabled Star Wars BB-8 and Jedi Master Lightsaber; but first on the list—and even pricier—was another futuristic tech toy, the hoverboard—humankind’s latest attempt to fly, or at least enable our kids to. With the hype around these brands comes a far greater flood of counterfeit versions of products like them. And genuine danger, as evidenced by the much reported-on hoverboard fakes, which had an alarming propensity to burst into flames.

Worldwide, genuine brands are increasingly targeted by cyber criminals and counterfeiters, losing not only sales but putting their reputations in jeopardy. Consumers are victims too, both being played for their addiction to seeming bargains but also feeling compelled to buy the toy of the moment, and not really thinking that fakes can be life-threatening. Worst of all, the ill-gotten gains from these counterfeit products is often funneled into criminal, even terrorist activities.

This holiday season NetNames issued a warning on hoverboards, as well as an advisory on fake Star Wars merchandise. Our rule of thumb is that the most popular holiday gift items are the ones most likely to be counterfeited. It’s important for consumers to know how to spot fakes—aside from the fact that they don’t want to be lining the pockets of counterfeiters or terrorists. Fakes, particularly electronics, pharma and cosmetics, can pose a real danger to the consumer. Therefore, many smart manufacturers are putting up YouTube videos explaining how to distinguish a fake from the real thing. But it’s equally important for brands to be watchful and proactive, so that this activity is caught, countered and minimized before it gets into the hands of customers.

How Did Counterfeiting Become So Pervasive?

Counterfeiting has exploded in the last decade or so, paralleling the growth of the Internet and online sales. It’s harder for counterfeiters to get their products into the supply chain headed for brick and mortar stores, but the Internet makes it possible for counterfeiters to bypass physical stores and flourish, as they’re hiding behind the anonymity of a website or an online marketplace. Counterfeit goods are much more likely to be available on ecommerce marketplaces—either on independent sites specifically set up to market fakes, or on platforms such as Taobao or AliExpress. Identifying and taking down these sites requires constant watchfulness and diligence.

The IP Crime Group estimates that counterfeits make up 10% of global trade. In our 2015 study Cost of Counterfeiting report, we noted that in 2014, there was a 15% increase in the sale of counterfeit goods online. Global management consulting firm A.T. Kearney, in a recent study looking at global ecommerce, projects that the annual growth rate of global ecommerce will be 16% for the next few years. While our best estimates for what’s visible come to a 15% annual increase, there’s likely even more counterfeiting that’s hidden from sight and not being accounted for.

Going back to our holiday gift examples, here’s an example of what we found when we started actually looking online for fake hoverboards. We found that less than 1% of online marketplace listings which made reference to the IO Hawk hoverboard brand name were genuine. As part of the investigation, we reported the number of IO Hawk counterfeit hoverboards available on well-known marketplace sites. The official IO Hawk is listed at $1,799.99 on the IO Hawk website. The table below shows the results that came back to us in response to searches for various IO Hawk-related product types on a number of major marketplace sites. 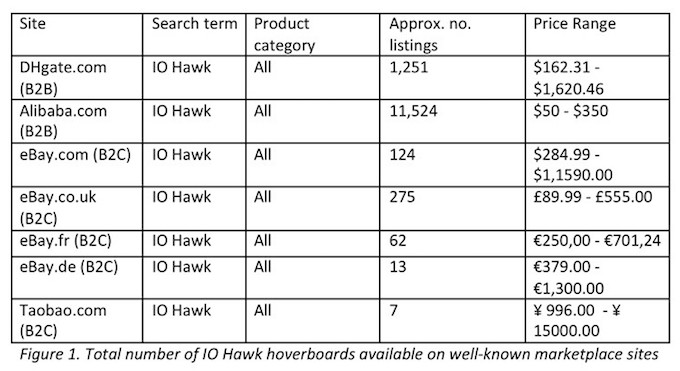 The Internet is an ever-evolving and relatively unregulated space where counterfeiters are able to set up convincing, albeit fake websites or marketplace sites, resulting in sales of counterfeit items to unwitting buyers. In addition to loss of revenues from stolen IP, fake versions of electronic items, pharma, cosmetics and food pose real risks to users who may be putting themselves in physical danger by purchasing defective products. With the popularity of hoverboards and Star Wars toys over the recent holiday season, many brands will have suffered the consequences of fans unknowingly purchase counterfeit items, including a negative impact on revenues and reputations. The onus is on businesses and brand owners to safeguard their customers and deploy an effective brand protection strategy in order to tackle the rising challenge of counterfeits. By taking the right steps, brands can identify and eliminate fraudulent items or websites, and wrest control back from the cyber criminals. In doing so, they will also be making the world a safer and more authentic place.