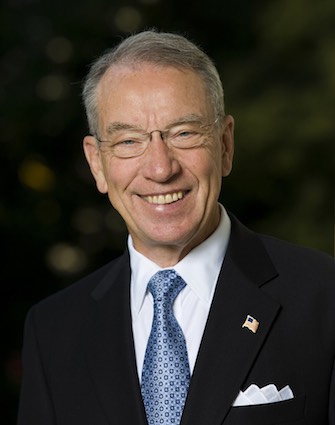 Senator Chuck Grassley’s town halls are legendary, at least in Iowa. Since May of last year, I’ve been attending as many as I can to explain why S.1137, the PATENT Act, is damaging to inventors. If you’re in Iowa, I’d recommend you attend one. You learn a lot.

The relationship between Grassley and Iowans is unique to say the least. In every county, he knows people by name, and someone knows him, his family or someone he knows. They’ll preface their question with a story about Grassley’s wife, his cousin, his mother-in-law or one of his old friends. To Iowans, Grassley is their friend, their relative, their leader, their neighbor and much more. Iowans trust Grassley like they do their own family, and they know Grassley’s going to do what is right, and especially what is right for them.

I watched Grassley field question after question in detail on diverse subjects from current events, terrorism, water rights, farm legislation, TPP, foreign affairs, the VA, taxes, regulation, Obamacare, and even legislation passed 25 years ago having to do with railroad retirement – and Grassley remembered exactly how he voted on all of it. His answers were factual, descriptive and broadly painted in simple terms so everyone understood the details and why he took a particular position.

He was standing and speaking all day, which would have exhausted a younger man. It exhausted me. If Grassley was tired, it was hard to tell. For 82 years old, this guy is sharp, fluid, healthy, and funny.

The first meeting this week was in Grundy Center, IA, during which a question about patent reform was asked. Grassley answered that he was trying to stop patent trolls, which he described as a person who buys up patents but never intends to build a product, and then sends threatening letters to small businesses demanding thousands of dollars or they will get sued.   Notably, he said that it costs our economy $83B per year.

Grassley allowed me to discuss how S.1137 will harm inventors two or three times last year and Grassley knows who I am and why I’m there. I asked if I could respond to his patent troll answer and didn’t expect him to say yes. But after Grassley made certain everyone knew I was not an Iowan and did all he could to discredit me, he let me have the floor.

I told him that I had been looking for examples of recent demand letters, but had not found any. MPHJ and the effects of the America Invents Act have already taught everyone that sending demand letters is bad business, so nobody sends any out. Now they just sue.

Then I explained I am an inventor and my sole asset is my patent. For a hypothetical moment, I told Grassley he is an investor and he invests in my company. I take his money and commercialize my patent. But big corporations see it, make their own products based on the patent and flood the market. I can’t compete with their deep pockets and I go out of business.

I then explained that he, as an investor in my failed startup, now owns my patent. He does not intend to make a product because the market is already saturated by the huge corporations who stole it to begin with. If he’s going to get his investment back, he’s got to enforce the patent, and that, of course, makes him a patent troll. He’s got one other option and that is to sell it to another patent troll.

It’s pretty obvious but I said it anyway— If he can’t get his investment back, he won’t invest to begin with. Without question, S.1137 will kill his definition of patent trolls, the bad actors shaking down mom and pop main street small businesses, but it would also make it impossible for legitimate startup companies to attract and obtain funding because angel investors and venture capitalists are thrown into the same legislative barrel in S.1137. Making it harder for legitimate startups to get funding is not a winning solution.

What I hope Grassley saw in that hypothetical moment is that S.1137 will kill the very economic engine that we need to foster in order to open up capital for startup companies that bring high paying jobs with good benefits to the US economy and, importantly, to his family of Iowans.

I didn’t explain that the $83B economic cost number has been soundly debunked. Grassley is good with numbers and I really don’t think he knows the number is fake. However, whoever gave him that number knows it. Maybe if his staff reads this, they will let him know he is using false numbers to support very dangerous legislation.

At the end of the meeting, he came over and shook my hand. Then he told me I was doing a good job. I’m not sure what that means, but I’ll chose to believe Grassley is listening and he needs more people explaining the damage of S.1137

Despite Grassley pushing S.1137, which will deal severe damage to inventors and to me personally, I walked away from 13 town hall meetings last week feeling a little like the Iowan I once was, I like the old farmer.