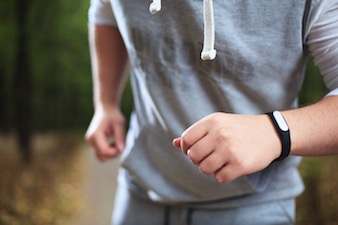 On November 2, 2015, San Francisco-based Fitbit Inc. filed a Section 337 complaint with the International Trade Commission (ITC) against AliphCom (d/b/a Jawbone) and BodyMedia, Inc. (Investigation No. ITC-337-3096). In a parallel proceeding in the U.S. District Court for the District of Delaware, Case No. 1:15-CV-00990, Fitbit alleged infringement of three patents assigned to Fitbit—namely, U.S. Patent Nos. 8,920,332 (titled Wearable Heart Rate Monitor); 8,868,377 (titled Portable Monitoring Devices and Methods of Operating Same); and 9,089,760 (titled System and Method for Activating a Device Based on a Record of Physical Activity). According to the district court complaint, Jawbone’s products associated with components of its UP series of trackers indirectly infringe the patents-at-issue. Fitbit hopes that it will be successful in preventing the import and sale in America of wearable activity tracking devices sold by Jawbone by requesting the ITC to issue a limited exclusion order and a cease and desist order.

The filings above are merely the latest in a round of patent lawsuits seeking to assert intellectual property rights in the growing market for fitness trackers. Fitbit earlier filed two other patent infringement complaints against Jawbone and Bodymedia—one complaint was filed in Delaware district court on September 3, 2015, and the other in the U.S. District Court for the Northern District of California on September 8, 2015. The additional request for an ITC investigation into Jawbone’s activity tracking device operations may help strengthen Fitbit’s ability to obtain an injunction.

In Case No. 1:15-cv-00775-UNA, Fitbit alleges Jawbone’s sale of the UP Move series of fitness trackers infringes upon U.S. Patent Nos. 9031812 (titled Notifications on a User Device Based on Activity Detected by an Activity Monitoring Device), 8909543 (titled Method for Detecting and Recording Physical Activity of a Person), and 9042971 (titled Biometric Monitoring Device with Heart Rate Measurement Activated by a Single User-Gesture). Fitbit further alleges Jawbone’s sale of products to customers for tracking and recording physical activity in conjunction with the UP App interface infringes the ‘812, ‘543 and ‘971 patents. With respect to AliphCom and BodyMedia, the complaint alleges the offer of sale and manufacture of the UP Move fitness trackers indirectly infringe the patents-at-issue. The complaint references the April 2013 acquisition of BodyMedia by AliphCom, a move which enabled Jawbone to incorporate BodyMedia’s multi-sensor approach into subsequent products for physiological data collection. Fitbit alleges that at least the UP3 and UP4 fitness trackers sold by Jawbone use multiple sensors, including temperature and bioimpedance sensors.

Jawbone earlier asserted infringement of its own patents. Between the months of May and July, Jawbone filed three lawsuits in an attempt to prevent Fitbit from importing or selling its fitness trackers; two of the suits were filed in a span of about two weeks in early June. In complaints filed in the U.S. District Court for the Northern District of California and with the ITC, Jawbone alleges infringement of three patents relating to technology used in wearable fitness and activity tracker devices that monitor and report on health and wellness metrics. The infringing devices listed include the Fitbit Zip, Fitbit One, Fitbit Flex, Fitbit Charge, and Fitbit Charge HR. Jawbone further alleges that Fitbit hired away key Jawbone employees in order to obtain Jawbones trade secrets and use such trade secrets to develop Fitbit’s competing fitness trackers.

The consumer market for fitness tracking wearable devices already generates global revenues of $2 billion, a figure which is expected to reach $5.4 billion by the year 2019, according to forecasts released by digital health and mobile application market research firm Parks Associates. At this point, both Jawbone and Fitbit have established themselves as the leading players in this field. Fitbit also recently scored big with its initial public offering this June (NYSE:FIT), which saw the company’s shares rise by 50 percent within a week of trading. The company which is able to maintain a leading position in the rapidly growing field of wearable personal fitness technology stands to assert itself as a highly valued corporation in the years to come.

William Cory Spence is the founder in the IP law firm of SpencePC in Chicago, Illinois. Mr. Spence is a trial attorney with focus on patent, trade secret, unfair competition (including conspiracy, tortious [...see more]