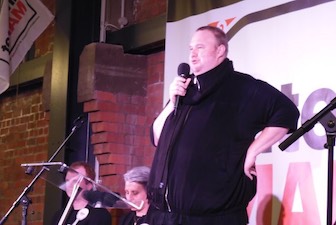 Kim Dotcom at a political rally. Photo taken at a rally held by the Internet Mana Party on 4 August 2014. CC 3.0.

The original indictment, filed by the Department of Justice in the Eastern District Court of Virginia back in January 2012, alleged that Kim and other defendants were responsible for $500 million in harm to copyright holders. The indictment also argued that the website generated $175 million in revenue over more than five years, mostly through user subscription fees which ranged from a few dollars per day to $260 for a lifetime membership. Kim Dotcom was taken into custody that same month by New Zealand police who rushed into Dotcom’s home wielding semi-automatic weapons. U.S. officials shut down the Megaupload website in March 2012.

Initially, New Zealand judges had declared as invalid both the search warrants used to obtain Dotcom as well as the search procedures and seizures of Dotcom’s property, including luxury vehicles. However, this was overturned in New Zealand court on appeal in February 2014 even after the country’s prime minister personally apologized to Dotcom for intelligence errors leading to the outsized display of force.

Prosecutors have already been able to flex their muscles with the charges laid before Kim Dotcom and his co-defendants. This February saw the conviction of Andrus Nomm, an Estonian computer programmer who had worked for Megaupload and pled guilty to felony copyright infringement. Nomm’s sentence includes one year and one day in prison. In return, he confirmed the Justice Department’s allegations on copyright damages and website income as well as Megaupload’s number of visitors, including 50 million daily visits and more than one billion visitors over the website’s lifetime.

Dotcom has already stated that he plans to file an appeal of the New Zealand court’s extradition decision, further delaying his appearance in American court. He also hasn’t let his arrest deter him from staying active in the Internet file sharing business. By summer 2013, Hollywood movie studios and other multimedia content developers were petitioning Google to remove Mega, a new file sharing service started by Dotcom in the wake of Megaupload’s demise, from its search engine results. When the New Zealand government gained covert control of Mega’s cloud storage this summer, Dotcom announced that he would cease his involvement with Mega and go on to create yet another file storage site.

In his defense, Dotcom has argued that he should not be held personally liable for the illegal activities of Megaupload’s users, who are the ones uploading copyrighted and pirated content to the servers. He’s also argued that up to one-fifth of all takedown notices sent to his website targeted legitimate content that did not represent infringement.

Piracy of copyrighted content continues to occur, although without the intense media focus seen during the days of Napster and Limewire. The United Nations Educational, Scientific and Cultural Organization (UNESCO) defines piracy as including the reproduction and distribution of copyright-protected material without the consent of the copyright owner. Statistics reported by the Recording Industry Association of America (RIAA) indicate that annual U.S. music sales have declined from $14.6 billion in 1999, when file sharing began to emerge as a legitimate threat to copyright holders, down to $7 billion in 2013, a decrease of 53 percent. In the five years between 2004 and 2009, the RIAA estimates that 30 billion songs were shared illegally using file sharing websites. Data collected from the Cisco Visual Networking Index indicates that 858 petabytes of data, the equivalent of 1.372 billion compact discs, were shared on average during each month of 2015. Not all of that content represents pirated copyrighted material, but it can be safely assumed that such material makes up a good portion of that file sharing.

The Directors Guild of America also keeps statistics on content piracy. A piracy fact sheet distributed by the organization indicates that each episode of the television show Heroes was watched on average by 5.9 million American viewers via television. That number was outstripped, however, by the 6.6 million times that each Heroes episode was illegally downloaded via BitTorrent. In June, the Los Angeles Times reported that about 20 percent of Internet users around the world were regularly accessing websites that offered copyright infringing music. 20 million Americans were also actively using peer-to-peer networks for file sharing, according to the article.

In recent years, copyright owners have pushing for legislation to protect copyrighted material and intellectual property from the unique concerns of the digital sphere, where it is so easy to share content unlawfully. In 2011, the U.S. Senate saw the introduction of the Protect IP Act of 2011 (PIPA), whereas the House of Representatives debated the Stop Online Piracy Act (SOPA) in that same year. Both of these bills would have enabled American law enforcement officials to take action against Internet websites which were actively engaging in piracy or enabling copyright infringement. Those copyright owners harmed by the infringement would also have had the right to seek injunctive relief from infringing website operators. Both of these bills include beefier provisions on copyright protection than the Digital Millennium Copyright Act of 1998 (DMCA) by enabling legal action against websites outside of the U.S., an area where the DMCA had proven to be inadequate over time.

Of course, as many readers may be aware, both of these bills languished on Capitol Hill after a maelstrom of backlash from the global tech community, which saw these laws as unnecessarily strict and potentially repressive in terms of regulating Internet content. Protests in major cities, supplemented by voluntary blackouts of major websites like Wikipedia and Reddit, turned the tide of public opinion and caused Congress to table both bills by the end of January 2012. Aspects of the tech community’s knee-jerk reaction to SOPA/PIPA and the public anger it was able to foment are somewhat similar to the political moment that was the debate on net neutrality in the Federal Communications Commission (a subject with potentially negative unintended consequences for American consumers which readers can see more about here).

With the Department of Justice going after a foreign target like Kim Dotcom, it begs the question of whether or not America is operating under de facto SOPA/PIPA rules. Or perhaps something even stronger, to judge by the military tactics used to bring Dotcom into custody. A blog post written by Dotcom and published on Christmas, just days after the New Zealand court’s ruling on his extradition, makes it clear that he intends to vigorously defend himself against what he argues is a lack of validity to the entire case.