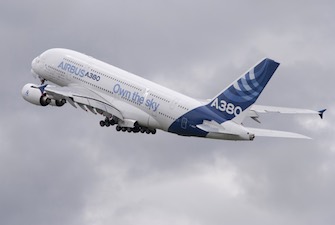 Airbus Group SE (EPA:AIR), based in Leiden, Netherlands, is a multinational corporation focused on the development of aerospace and defence technologies. Sales figures indicate that Airbus will outsell top rival Boeing Company (NYSE:BA) for 2015, although lagging production may result in Boeing being able to fulfill more orders by the end of the year. Airbus has shown some interest in improving its manufacturing capabilities, partnering with Autodesk, Inc. (NASDAQ:ADSK) to 3D print large cabin components that will be used in test flights during 2016. Although Airbus is a European company, it operates globally and has been expanding recently into Mobile, AL, increasing airplane production in that state.

The airplane manufacturer has earned a great deal of attention in recent weeks thanks to its research and development activities. News outlets have taken note of Airbus patent filings which indicate the development of a supersonic jet which could travel between New York and London within an hour at speeds up to 5,500 kilometers (3,417 miles) per hour. Patent filings for supersonic fligh 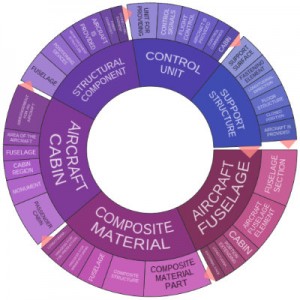 t technologies also show aircraft designed to fly at altitudes of 100 kilometers (62 miles). The innovative air travel company also has its sights set on outer space, signing a deal with the European Space Agency in early December to develop a spacecraft that will travel to Jupiter to study both it and its moons.

The R&D pursued at Airbus is pretty robust. Last year, the company placed 61st out of all companies earning patents from the U.S. Patent and Trademark Office. It earned 717 U.S. patents in that year, an increase over its 2013 patenting activities of 17.2 percent. Airbus has already outpaced its 2014 patent total, earning 745 U.S. patents in 2015 through early December. The text cluster provided by Innography’s patent portfolio analysis tools shows us that there has been a heavy focus on development of aircraft fuselage, aircraft cabin and composite material technologies over at Airbus.

Some unique systems for getting passengers or cargo onto and off of aircraft were at the center of a couple recent Airbus patents which we noticed, including U.S. Patent No. 9193459, issued under the title Unloading and Loading of Aircraft. It protects an aircraft including a door opening for the conveying of passengers or cargo and an access platform mounted on the aircraft movable between stowed and deployed positions; the platform has a support surface disposed between two ends, one of which is not parallel to the door opening. The invention is intended to address problems in accessing the cargo hold, which can lengthen turnaround time and increase

costs to an airline. A system for loading passengers in such a way that reduces the time that an airplane is idle is discussed within U.S. Patent No. 9193460, titled Method for Boarding and Unloading of Passengers of an Aircraft with Reduced Immobilization Time of the Aircraft, Aircraft and Air Terminal for Its Implementation. It claims an aircraft having a removable cabin module with a floor, an upper aircraft fuselage portion connected to the floor and two walls to form a cabin for carrying passengers, cargo or combinations thereof; the aircraft further includes a reception space for receiving the removable cabin, a nose cone with a cockpit and transverse wall, a tail cone with a tail unit and transverse wall, a lower structure making up a lower fuselage portion, a centring device for centring the removable cabin in the reception space and a retaining device having multiple docking devices for retaining the removable cabin module. This system enables airlines to board passengers, check them in and then load luggage cargo without requiring an airplane to remain immobile as a way of reducing fuel costs. 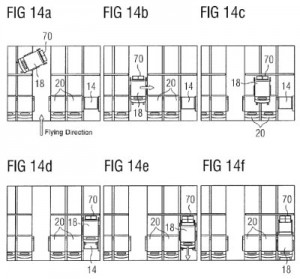 Safety systems to prevent helicopters from colliding with the ground are the focus of U.S. Patent No. 9199744, entitled Method and a Device for Issuing Terrain Avoidance Warnings for a Rotary Wing Aircraft. It claims a method of issuing a terrain avoidance warning by a rotary wing aircraft involving the steps of preparing a bundle of possible avoidance trajectories for the aircraft to avoid colliding with relief or an obstacle and triggering a warning if any of the bundle of possible avoidance trajectories leads to a distance from the relief or obstacle which is less than a predetermined distance. The technology provides a piloting assistance system which is useful for avoiding terrain which identifies avoidance maneuvers that can realistically be performed based on the aircraft’s current state and actual performance. Readers might also be interested to learn about an innovation which would make flight recorders easier to find in the event of an accident, featured within U.S. Patent No. 9187183, titled Combined Rescue Beacon and Flight Recorder Device for an Aircraft and Aircraft Provided with Such a Device. This patent protects a combined emergency beacon and flight recorder device having a frame with at least one outer side face fitted with a solar panel and configured to fit into a housing created in an airfoil element in the aircraft, wherein the device is both ejectable and includes a means of flotation. The resulting invention achieves many advantages, including a stand-alone power supply and buoyancy in water. 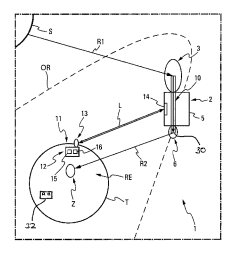 Unmanned vehicles were the focus of a couple of patent applications filed recently by Airbus with the USPTO, including U.S. Patent Application No. 20150302669, filed under the title Method for Inspecting an Airborne Vehicle. It discloses a method for inspecting an airborne vehicle by equipping an unmanned mobile vehicle (UMV) with a sensor, maneuvering the UMV through an interior of the airborne vehicle, recording a plurality of scan parameters in the airborne vehicle’s interior using the sensor, associating the plurality of scan parameters with spatial positions within the airborne vehicle and generating a parameter map of the interior according to associated spatial positions. This robotics innovation applies the use of unmanned vehicles to the inspection of aircraft to reduce the time and cost of inspections conducted by personnel. A novel form of energy supply for unmanned aerial vehicles (UAVs), also known as drones, is discussed within U.S. Patent Application No. 20150311755, which is titled Wireless Remote Energy Supply for Unmanned Aerial Vehicles. This patent application, filed by Airbus subsidiary EADS Deutschland, would protect a transmitter unit for wireless transmission of power by way of a bundled laser beam, the unit having a laser fiber bundle wherein each laser fiber emits a laser beam, a positioning optics for adjusting an emission direction of the bundled laser beam, a field lens and a primary lens; the emitted laser beam travels through the positioning optics, field lens and primary lens. The technology increases the maximum operating time of a UAV being used as a transport device by supplying power via a bundled laser beam that can be transmitted at distances up to ten kilometers (6.21 miles). 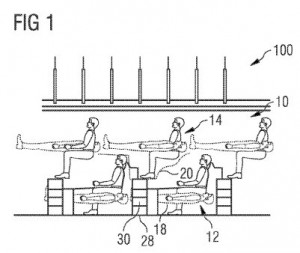 Making effective use of passenger space is always a top priority for airliners and Airbus has developed an intriguing way to do so, reflected within U.S. Patent Application No. 20150274298, which is titled Passenger Seat Arrangement for a Vehicle. It claims a passenger seat arrangement comprising a seat arranged on a lower level and a seat arranged on an elevated level, both seats having a supporting surface for supporting a passenger and movable between an upright seating position and a reclined lying position in such a way that reclining one seat increases the distance between both seats. As diagrams attached to the patent application filing show, this new cabin configuration would allow Airbus to cram a great many more passengers into its airplanes. The need for more effective use of space on an aircraft was also a driving force behind the invention that would be protected by U.S. Patent Application No. 20150343732, titled Waste Compaction System for a Vehicle, Cabin Monument for a Vehicle Having Such a Waste Compaction System and Vehicle Having at Least One Compaction System. This patent application discloses a waste compaction system for a vehicle having a movable trolley for storing waste and a docking station integratable into a cabin monument for inserting the trolley; the trolley contains an opening for inserting waste, a vacuum waste compacting mechanism and a first suction port. The use of vacuum pumps achieves greater reliability and reduced size over conventional electromechanical waste compactors for compacting trash accumulated on flights. 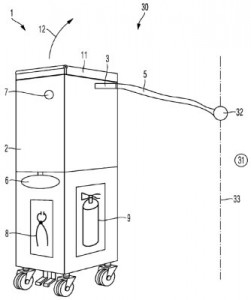 A novel innovation for the protection of aircraft interiors in the event of a fire is detailed within U.S. Patent Application No. 20150328486, titled Fire Protection Trolley and Fire Protection Device Comprising a Fire Protection Trolley of this Type. It would protect a fire protection trolley for securing a burning or flammable article having a sealable fire-resistant safety container containing a medium and an interface connected to the safety container which can connect with a counterpart interface of a smoke gas exhaust line for removing the medium located within the safety container. This innovation is intended to respond to new fire safety concerns which have been created by the proliferation of smartphones, tablets and other electronic devices which can be carried aboard an aircraft. Enhanced safety during the performance of aircraft maintenance is the focal point of U.S. Patent Application No. 20150317888, entitled Forewarning of Risks When Working on an Aircraft. 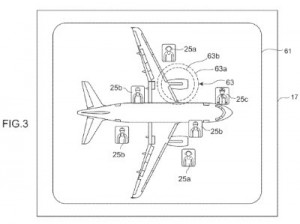 It claims a system for forewarning of risks incurred when working on an aircraft having an identification module that identifies a set of risky zones in the aircraft and its environment during work on the aircraft, a location module that locates a position of each operative performing work and an alert module that generates an alert when an operative is situated in a risky zone. The resulting safety system is able to warn maintenance personnel of risks in such a way that fewer operatives are required, reducing the cost of maintenance.

Finally, we thought we’d end with quick look at an Airbus invention again related to satellite technology, outlined within U.S. Patent Application No. 20150274327, which is titled Satellite Solar Generator Wing and Satellite. It discloses a satellite solar generator wing having solar panels including two fixed panels and one semi-fixed panel connected in such a way that the solar panels can assume an operating position or a transport position, the semi-fixed panel arranged in a freely oscillating manner between the two fixed panels. This invention provides an energy generation mechanism for a satellite with an improved power-to-weight ratio which can handle the increased performance demands which have been placed upon satellites in recent years.