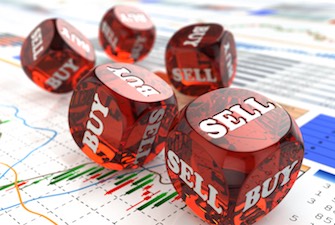 The USPTO’s Patent Trial & Appeal Board (PTAB) was labeled a patent “death squad” as recently as eighteen months ago.  The label conveyed the shock and awe of those accustomed to the plodding, cost prohibitive ways to challenge the invalidity U.S. patents in the district courts. In contrast, the patent challenge mechanisms introduced by the America Invents Act (AIA) in 2012, and presided over by the PTAB, are fast and cost effective alternatives to traditional patent litigation. Has Congress actually gotten it right—or have they gone too far?

In the early days of Inter Partes Review (IPR), the institution rate for challenged patent claims approached 85%.  Although the sample size was relatively small at the time, and the first patents targeted for testing the new proceeding were especially weak patents in the predictable arts, the “kill rates” dominated the headlines.  Those early IPR trials often resulted in equivalent cancellation rates (85%) at the time of the final PTAB decision (some 12 months later).  While Congress had intended to remedy the asymmetrical risks/costs of defendants subject to NPE or “troll” litigation, patentees decried the solution as an unbalanced mechanism itself that harmed true innovators in the name of stomping out “troll” behavior.

The early “death squad” hysteria persisted just long enough to catch the interest of hedge funds. The hedge funds saw an opportunity to utilize the PTAB to spook financial markets to their gain.  The game plan involved establishing “short” positions in publically traded stocks that have their valuation closely tied to patents, as is the case in the Bio/Pharma sector.  Given the PTAB’s early infamy, the bet was that the mere filing of an IPR would spook investors enough to move a stock price to the negative (i.e., quick profit for a short seller).

Yet, as hedge funds targeting Bio/Pharma patents have quickly learned, gambling on patent challenges in the unpredictable arts is not a viable, long-term business model.

First, the institution rate for patent challenges in the unpredictable arts (Bio/Pharma in particular) is in the neighborhood of 50%, not 85%.  Of the petitions filed by hedge funds, the institution rate is 30%, and that is counting petitions that were only partially instituted.  What this means, is that the market has quickly realized that 30% institution will certainly not lead to a 30% kill rate at the time of final written decision of the PTAB.  It is not realistic to expect that patentees will always lose at trial.  Likewise, potential patentee appeal wins must be factored in, especially as hedge funds may not have Article III standing to even participate.  Given that a stock price should not realistically move unless all commercially valuable claims are subject to serious, imminent threat, it is painfully obvious why the stock market has stopped taking these hedge fund filings seriously.

Shown below are market snapshots of the various hedge fund stocks at the time of initial petition filing relative to NASDAQ activity, then again at institution.  With the exception of the first attack against the patent of Accorda Therapeutics, the market has largely ignored all PTAB events since.  Indeed, a few weeks back, on the day Celgene saw IPRs instituted on some of its claims directed to blood cancer drug Revlimid, the stock actually increased in value. 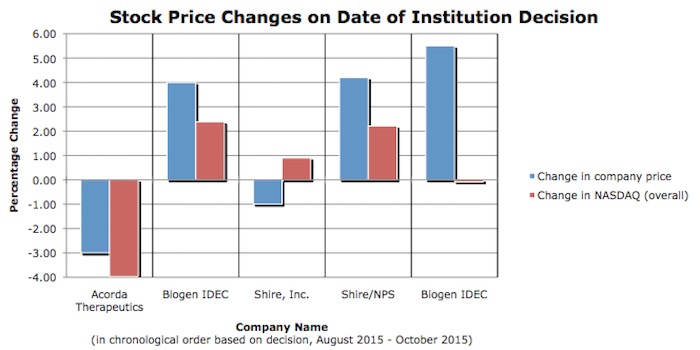 That is not to say that the PTAB is not a threat to Bio/Pharma.  Clearly, IPR challenges will be more successful relative to district court paths on the same prior art (given the difference in evidentiary standards).  But, enablement and written description may be far more effective challenges to such patents. Still the idea that a market can be spooked on the prospect of a mere filing is long since passed, and justifiably so.

Of course, some financial petitioners have more wisely targeted patents in the predictable arts to affect valuation of companies sitting on substantial damage verdicts, or to influence penny stock prices of such companies.