Sell Your Ideas With or Without a Patent 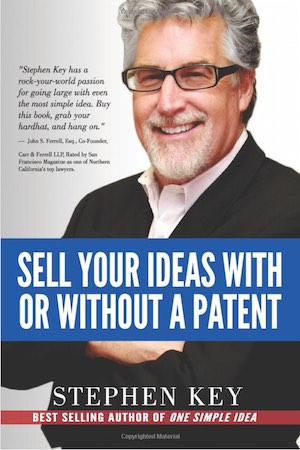 Stephen Key is an inventor coach of One Simple Idea: Turn Your Ideas Into a Licensing Goldmine and One Simple Idea for Startups and Entrepreneurs: Live Your Dreams and Create Your Own Profitable Company. He has a new book titled Sell Your Ideas With or Without a Patent. The title of the book will undoubtedly rub patent attorneys and patent agents the wrong way, but you can’t always judge a book by its cover, or in this case a title.

If you have read Key’s other books (which I strongly recommend) you know that he is not at all anti-patent. Indeed, Key has been quite successful as an inventor himself, holding a strong portfolio of patents that he has licensed, sold in some cases and successfully litigated. Key is not one who recommends inventors forego the patent process, but rather Key is a businessman who understands several critically important business realities – first, just because you can get a patent doesn’t mean you should, and second, before you rush off to the patent office you need to do your homework and have some reason to believe the invention has a market and is feasible to manufacture.

Let’s take a step back. I spoke with Key on September 21, 2015 (yes this article is long overdue) and he explained to me that his inventor coaching business – Invent Right – has both grown and changed over the past several years. “We are actively licensing for students every week,” Key told me.

As Key works with inventors he coaches, who he refers to as students because he teaches them how to do much of the work for themselves, he explained that increasingly he is seeing interest on the part of companies in licensing inventions without a patent attached to the product. “What we have noticed is that companies say they care about patents, but the bottom line is really about speed to market and how fast they are going to be able to sell them,” Key explained. “The life cycle for products is so short.”

“Before you even think about protecting your product with intellectual property, including a [provisional patent application], I want you to do some research,” Key writes in his new book. “The correct order to do things in is this: First, is your product idea marketable… If the answer is yes… Is your product idea unique? Third, is there a chance that it might be patentable? Only after these questions are answered are we going to begin writing your [provisional patent application].”

It is hard to argue with this approach. Frequently inventors are so determined to get a patent based on the misguided belief that obtaining a patent will result in a money truck showing up at their front door. Nothing could be further from the truth. If you do not have an invention that anyone wants to pay for it doesn’t matter that you have the right to exclude others from making, using and selling provided by the patent. Indeed, a patent can be a worthwhile endeavor, but only if the underlying business and market realities are favorable. Remember you will need to charge a premium for the product or service covered by your patent in order to at least recoup the cost of obtaining a patent. Running off to the patent office without proper research and business diligence is a recipe for making a huge mistake.

Let’s assume you have taken Key’s good advice and you have considered the marketability of the invention and whether it is unique enough compared with other solutions available. If the answer to those first two questions suggests you should be moving forward now you are at a place where you should consider a patent search to determine if a patent can likely be obtained, and to uncover the closest prior art so you know how to describe the uniqueness of your invention in a patent application, likely a provisional patent application, in a manner likely to place the invention is the best light possible.

Frequently I will hear from inventors that nothing like their invention has ever existed. Whenever I hear that red flags go up. It is unrealistic. Key agrees. “I can almost guarantee you that you will find something similar, but that is a great thing because now you know what not to do,” Key told me. Indeed, he is absolutely correct, and this touches on another lesson in his new book – you want to reduce risk in your project, including the risk that you will unwittingly spending a large amount of valuable time working on something that already exists and could never be patented.

“Really look at the prior art and really be the expert at that,” Key explained. “Once you understand the history you can invent for the future. Without understanding the prior art you don’t have a roadmap.” If only inventors would take this advice to heart! The inventor needs to be or become knowledgeable about the industry and about the prior art. If you do not take the time to read the patents located you will not see the evolution of the products, you will also not be in a position to see where things are heading and what others haven’t figured out yet. An inventor leaving the prior art to a patent attorney or patent agent is a mistake. They don’t need to become experts on the legal nuance, but they really do need to understand the prior art and where the industry is heading if they want any chance to succeed.

The concept of “perceived ownership” may strike some as odd, but the unfortunate reality is that patents need to be defended and are easier to challenge now than ever. Do you ever have a fully quieted title to a patent any more? The answer is sadly no. What you do have is the perception that you own the rights, which can attach as soon as the application is filed. It is a business reality that if you are making money you will face competition, including unscrupulous knock-offs, but legitimate companies who are not looking to instigate court battles are increasingly interested in outside innovation, sometimes referred to as open innovation. They want your ideas and inventions, and if you have a solid provisional patent application many are now willing to enter into a licensing deal even when there is no patent yet issued.

“Licensing agreements are signed every week because of PPA,” Key explained. “If the patent gets issued maybe the royalty will become 5 to 7% and if the patent doesn’t issue it is maybe 1%.”

Key’s new book really talks about using a PPA as a strategy without needing a patent issued, which is why every inventor considering going the licensing route should read it. “Most important book I’ve ever written,” Key told me. “The game has changed. I wanted to write a book about what is real.”

As an inventor and patent agent friend of mine — Luis Figarella — recently told me, everyone wants to become an overnight success, but many years of struggle and sacrifice went into making that overnight success! Isn’t that the truth! So stop, take a step back and becoming informed! Start by reading all three of Key’s books. And if you aren’t willing to at least read Key’s books are you really serious about succeeding?