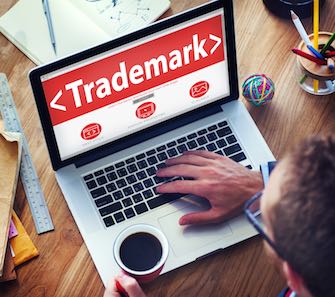 Since the inception of the search engine, trademark owners, advertisers, search engine providers, and the courts have struggled with the issue of the use of third-party trademarks in keyword advertising and search returns, and whether such trademark use is likely to confuse consumers when they are searching for information regarding a particular brand. Despite an array of holdings on this issue over the years, following the 2011 decision in Network Automation, Inc. v. Advanced System Concepts, Inc., the Ninth Circuit and other courts have generally held that the potential for “mere diversion” of a consumer caused by the use of a third party’s trademark in connection with sponsored keywords or search results does not constitute trademark infringement unless a trademark owner can demonstrate that particular search returns or sponsored keyword advertisements are likely to cause confusion based on the specific use or presentation of a trademark in a search return. In these disputes, courts often cite the experience and savvy of Internet users in navigating the World Wide Web and their familiarity with search tools and the accompanying results.

Most recently, a trademark owner has presented this issue as a slightly different question. Namely, is online retailer Amazon.com, Inc. (“Amazon” or “Amazon.com”) causing consumer confusion with its algorithm-generated search returns when a customer searches the company’s website for a product or brand that Amazon does not carry?

In Multi Time Machine, Inc. v. Amazon.com, Inc., the U.S. Court of Appeals for the Ninth Circuit reversed the district court’s grant of summary judgment in a trademark infringement action filed by watch company Multi Time Machine, Inc. (“MTM”), and held that a jury could potentially find that Amazon has created a likelihood of consumer confusion through the format of its product search returns.

MTM manufactures high-end military-style watches under the trademarks MTM, MTM MILITARY OPS, and MTM SPECIAL OPS. MTM does not sell its watches to Amazon.com for resale, and MTM does not authorize its distributors to sell the MTM watches through Amazon. However, MTM sued Amazon for trademark infringement and sought injunctive relief to bar Amazon from using its trademarks in a particular manner when customers search for MTM’s products on Amazon. The district court granted summary judgement to Amazon, and MTM appealed.

According to the evidence submitted before the court, if a customer is searching for “MTM Special Ops” watches on Amazon.com, the customer is routed to a screen that displays the customer’s search terms in the query field. Directly below the search query field, the phrase “MTM Special Ops” in quotation marks appears, and then below the quoted phrase, the product name appears again as “Related Searches: MTM Special Ops.” Underneath these three iterations of the MTM search query, Amazon provides an image list and the product names of various men’s watches that are for sale through Amazon.com, including rugged, military-style watches that are manufactured by MTM’s competitors. Customers cannot purchase the watches from the search results page, and they must click on the product links directly to reach the product detail page. However, once a customer reaches a product detail page, the customer’s initial search inquiry, “MTM Special Ops,” remains in the Amazon.com search field. The court noted that Axmazon’s search return page and its product detail pages do not expressly indicate that Amazon does not carry the MTM watches. Conversely, the court observed that some of Amazon’s competitors announce that no product search results match the “MTM Special Ops” query before listing competitors’ products. 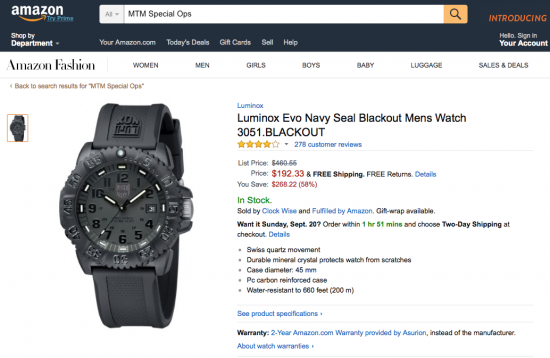 The court cited an expert report submitted by MTM, which suggested that the search results on Amazon are “ambiguous, misleading, and confusing.” Based on this report, the court found that a jury could infer that shoppers may be confused as to why MTM watches are not listed in the Amazon search return, since there is no express indication that the retailer does not carry the MTM watches. The court also opined that a jury could infer that the search results will cause shoppers to wonder whether a competitor has acquired MTM or if the competitor is otherwise affiliated with or endorsed by MTM.

The court then examined the Sleekcraft eight-factor test for likelihood of confusion and determined that five of the eight factors were relevant to its analysis, and that three of the five relevant factors “appear to weigh in favor of finding a likelihood of confusion.” Specifically, the court determined that (1) there was a genuine issue of material fact as to the strength of MTM’s trademark, (2) a jury could find that the similarity of the goods weighs in favor of a finding a likelihood of confusion because both MTM and Amazon sell specialized, military-style watches, and (3) a jury could possibly infer that Amazon had an intent to confuse consumers when they are searching for products that are not carried by Amazon.

The court concluded its opinion stating that it was “by no means certain that MTM will be able to prove likelihood of confusion under an initial interest confusion theory.” But, because the court found genuine issues of material fact to be resolved, it reversed and remanded.

Judge Silverman’s dissent analogized the Amazon search results to a diner in a restaurant who asks for a Coke beverage, but is told that the restaurant does not carry Coke, only Pepsi, which likely would not constitute trademark infringement. Because the Amazon search results clearly labeled the name and manufacturer of each competing watch that appeared in the “MTM” search results, along with a photograph of each product, Judge Silverman opined that “no reasonably prudent consumer accustomed to shopping online would likely be confused as to the source of the products.”

This case will be closely watched by online retailers and trademark owners, as it has the potential to disrupt the way that product search returns of competing brands are generated and displayed in the context of searchable store directories, and may have a larger impact on the use of trademarks in various online searching tools.

Sarah Bro is an associate in the law firm of McDermott Will & Emery LLP and is based in the Firm’s Orange County office. Sarah focuses her practice on trademark prosecution and [...see more]