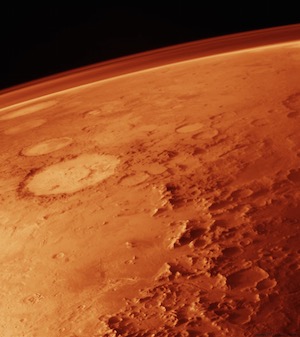 Mars, taken from Viking Orbiter from low orbit. The Galle “happy face crater” can be seen to the left.

We’re now just a little bit closer towards putting a human being on the surface of Mars thanks to the completion of a series of developmental tests on an RS-25 engine that will power NASA’s new Space Launch System (SLS) rocket in the future. The tests, which took place at the agency’s Stennis Space Center in Bay St. Louis, MI, were performed to collect data on engine performance that will be used to develop a new engine controller that will both monitor the engine’s performance and communicate programmed performance needs.

The RS-25 engine, manufactured by Aerojet Rocketdyne (NYSE:AJRD) of Sacramento, CA, has long been utilized by NASA, powering the rockets for each of the 135 launches taking place during the Space Shuttle program. 16 of the units are located at Stennis and units have been modified to produce higher thrust levels. The RS-25 uses hydrogen fuel for its propellant. At 109 percent of its rated power level, which is how hard the modified RS-25 will be working, the engine creates 512,000 pounds of vacuum thrust. At least in their early stages, SLS missions will use rockets powered by a cluster of four expendable modified RS-25 engines to provide the thrust necessary to lift the launch vehicle’s core stage. This cluster configuration provides about two million pounds of thrust on its own. When coupled with the five-segment solid rocket boosters being designed for SLS, a total of 8.4 million pounds of thrust will be used to lift initial SLS launches weighing 77 tons (70 metric tons). In later SLS missions that will travel to Mars and asteroids, SLS missions will grow towards 143 tons (130 metric tons) of weight. 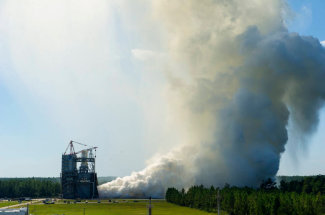 Preparations for the testing of modified RS-25 engines began in December when the A Test Complex at Stennis received a new thrust frame adapter that was designed specifically to work with the modified engine. The former thrust frame adapter was designed to work with J-2X rocket engines which produce up to 294,000 pounds of thrust, only a portion of the total thrust generated by the modified RS-25. Other work done to prepare the Stennis text complex included piping work to deliver fuel to the engine, installation of instruments capable of measuring rocket engine thrust and, of course, installation of the RS-25 engine itself. 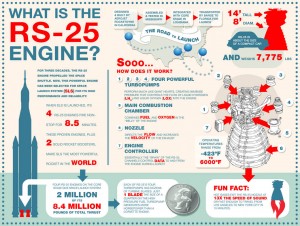 The first successful test of the modified RS-25 took place on January 9th of this year when an RS-25 at Stennis was powered up for 500 seconds, the first hot fire of any of these engine units since 2009 when engine testing for the Space Shuttle program was ended. That test was the first time that the RS-25 was checked against its new, more powerful specifications. Because of the fine tuning, these engines will encounter colder temperatures of liquid oxygen, greater inlet pressure, greater vehicle acceleration as well as higher nozzle temperatures created by the four engine cluster configuration. 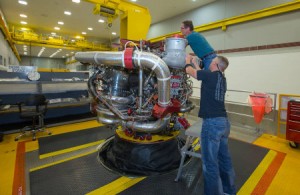 The RS-25 engine cluster is being designed to make SLS rockets the most powerful launch vehicles in the world, offering a greater payload mass, volume capability and energy than any other rocket in the past. It will be able to travel faster and carry more weight than Space Shuttle missions, enabling larger human and robotics explorations. Instead of probe flybys of Saturn and Jupiter, SLS could enable robotic exploration missions that can tell us far more about the environments of these planets far more than spectrometry or other imaging techniques. Scientific equipment will also be able to be flung into space at faster speeds, delivering payloads to distant planets more quickly.

SLS Block 1, the 77-ton rocket configuration which will be used for early missions, is configured with the RS-25 four-engine cluster near its base; in later SLS missions, rockets will use a Block 2 configuration which includes an additional upper stage increasing thrust by 20 percent. Above them sits the series of rocket boosters helping to increase the vehicle’s overall thrust, located just below the launch vehicle’s 200-foot tall core stage. At the top of the SLS Block 1 sits a stage adapter which connects the Orion spacecraft that will carry astronauts farther into space than we’ve ever gone. Orion, which made a successful test flight in space during 2014, is the first spacecraft developed by NASA in a generation for carrying astronauts into space. Innovative aspects of the Orion craft include a launch abort system designed to increase the safety of SLS crews, giving astronauts escape capability in case of an emergency on the launch pad. Rigorous testing of Orion has shown NASA that the craft can handle harsh launch and reentry environments as well as Pacific Ocean splashdown landings. 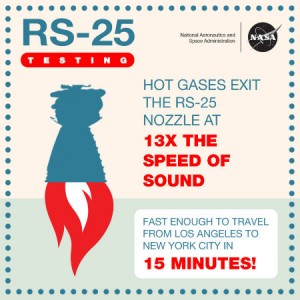 The first chance that the world will have to see SLS in action will be September 2018 when Exploration Mission 1 (EM-1) is scheduled to take off for outer space. The uncrewed mission has SLS launching Orion into an orbit located 975 nautical miles from Earth’s surface. The seven day mission involves Orion circling the moon before it returns to Earth, showcasing the integrated system performance of both SLS and Orion. The expendable nature of the RS-25 engines will begin to come into play during EM-1 as the cluster of four engines will be destroyed after every launch when the core stage returns to Earth and splashes down in a predetermined disposal corridor.

Much more excitement will take place during Exploration Mission 2 (EM-2), which will be the first time that both a crewed Orion mission and a mission to land on an asteroid will get underway. Current plans have EM-2 launching in 2021, although it’s possible that the start date could be pushed to 2024. When it does lift off, it will do so with the intention of sending two astronauts towards an asteroid located near the Moon. EM-2 will last nearly one month long, during which time NASA astronauts will engage in a practice flyby of a captured asteroid in lunar orbit.

Both SLS and the Orion spacecraft are projects working in partnership under the overall heading of NASA’s Exploration Systems Development programs. Projects working in this sector of the agency are intended to support and advance to extend human existence past the Moon and throughout the solar system. Preparations for these programs include renovations to the spaceport at the Kennedy Space Center in Florida, retrofitting a facility designed for the Space Shuttle program to enable SLS launches.