Yesterday we profiled American research and development of autonomous vehicle technologies, noticing that GM has a much larger patent portfolio in this space than Ford, but that Google has the largest portfolio related to self driving cars. Today we look overseas to take a look at the autonomous vehicle technologies being pioneered by foreign automakers. 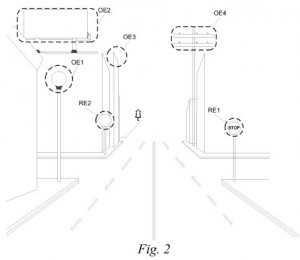 We identified a total of 54 patented autonomous vehicle technologies in the holdings of the Toyota Motor Corp. (NYSE:TM), the largest foreign competitor among major auto manufacturers. These patents reflect practical systems helping autonomous vehicles identify roadway features, such as is described within U.S. Patent No. 8825371, entitled Navigation of On-Road Vehicle Based on Vertical Elements. The apparatus for a vehicle protected here includes a navigation unit that determines a vehicle’s location, a detection unit for detecting objects external to the vehicle, a filter unit that filters objects based on a level of elevation over a road, a local database storing data of objects that are expected to be detected and a transceiver that communicates with a remote database in the event that an object is unrecognized. This system for detecting elevated objects is designed to further refine determinations of the location of self-driving vehicles. A similar system for deriving more accurate positioning data for an autonomous vehicle is the focus of U.S. Patent No. 9062977, titled Navigation of On-Road Vehicle Based on Object Reference Data that is Updated. The vehicle apparatus disclosed here includes a plurality of sensors for detecting objects external to a vehicle as well as circuitry configured to identify and recognize road features and determine if any objects have changed position. This system is intended to help an autonomous vehicle navigate a road more accurately and more safely.

We also found 49 U.S. patents in the holdings of the Honda Motor Co. (NYSE:HMC) related to self-driving technologies, including the traffic safety system outlined within U.S. Patent No. 9104965, entitled Vehicle with Computing Means for Monitoring and Predicting Traffic Participant Objects. It protects a method for predicting a state of a physical traffic object by generating sensorial information to compute an approximate probability distribution of the object’s current state and predicting a future state of the object with the use of standard Bayesian filtering concepts. This technology, which could be applied to autonomous ships and planes as well, is designed

to improve the analysis and detection of physical objects moving within a car’s vicinity, especially in urban environments. Honda has also developed a technology that has one foot in both the autonomous car and electric vehicle sectors, reflected within U.S, Patent No. 8983693, which is titled Guidance Apparatus of Unmanned Autonomous Operating Vehicle. This patent protects an apparatus for guiding an unmanned autonomous vehicle with a battery which operates prime movers for driving wheels and magnetic sensors that detect the intensity of a magnetic field to move a vehicle towards a charging device. This technology, which also has applications for autonomous lawn mowers and other robotic equipment, detects when a battery needs to be recharged and automates the process of getting the vehicle to an energy source.

which is titled Driving Mode Changing Method and Apparatus of Autonomous Navigation Vehicle. The driving mode changing apparatus claimed here includes a controller that detects a failure of the vehicle, senses the driver’s position within the vehicle, switches a control of the vehicle to the sensed driver and displays information necessary to drive a vehicle on a display unit. This innovation is designed to improve safety in autonomous vehicles by transferring control a vehicle to a driver even when that driver is not seated in the driver’s seat.