Comic-Con Considerations: Cosplay, the Right of Publicity, and Copyright Concerns 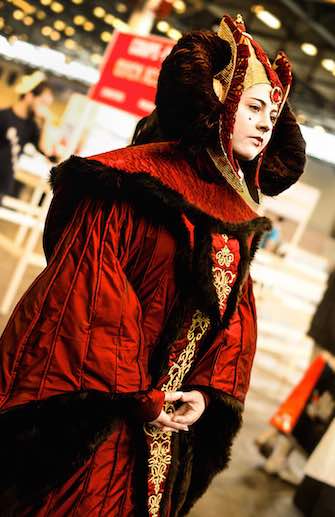 For as much as Comic-Con is about comics, TV, and upcoming movies, it’s not hard to see that a large portion of its allure for fans is cosplay. Cosplay (a Japanese portmanteau of costume and play) consists of fans who create and wear costumes and outfits based on their favorite characters in media, spanning all forms of entertainment but most notably, video games, comics, movies, and TV shows. Most cosplayers do not buy their costumes, but rather physically sew and “design” the ensembles themselves, including sculpting foam to look like armor, obtaining elaborate wigs and headgear, and spending hours applying makeup.

Because cosplays are based off existing characters, and sometimes even objects, any copyright attorney worth their salt can tell you that these are derivative works, if not outright copies. The Copyright Act of 1976 defines derivative works as “a work based upon one or more preexisting [copyrightable] works such as a translation, musical arrangement, dramatization . . .or any other form in which a work may be recast, transformed, or adapted. A work . . . which, as a whole, represent[s] an original work of authorship,” (emphasis added). Merely changing the medium is not enough to be considered an original work; however, a derivative work must have some independent artistic expression sufficient to support a copyright, generally referred to as non-trivial distinguishable variation. The variation requirement is an important distinction, because it tells a potential plaintiff whether their work has been copied, or whether a derivative work has been created.

Either way, cosplays fit into this category, as most cosplayers change mediums in their creation, such as from animation to real life, and involve many artistic decisions and choices in the process. After all, the idea/expression dichotomy, which limits the scope of copyright protection by separating an idea itself from the expression of that idea, is difficult to apply across different formats. Think about how many changes and choices are made when a novel becomes a film; thus, it’s reasonable to assume that most cosplays meet the requisite amount of creativity sufficient to be considered derivative works. Some cosplays may even combine multiple characters at once. So, we know that cosplay only exists because of preexisting works, but that most involve some independent creativity. The question remains- what rights are really at issue?

In 1991, the Copyright Office released a policy decision stating that costumes are “useful articles, and will be registrable only upon a finding of separable artistic authorship.” A “useful article,” the Copyright Act tells us, is “an article having an intrinsic utilitarian function that is not merely to portray the appearance of the article or to convey information.” So, the classic useful article that costumes fall under is clothing, which is why they are sometimes difficult to register and protect. Courts are reluctant to afford a limited monopoly, in the form of a copyright, on clothing designs and patterns because taking them out of the public domain could wreak havoc with every day outfits and bestow a windfall on a particularly litigious owner, whose work may be derivative or non-original in its own right.

Since the policy decision, courts have examined costume registrability several times, fluctuating between finding that costumes are unregistrable useful articles, and other times finding separate artistic expression. 1 2 Melville B. Nimmer & David Nimmer, Nimmer on Copyrights § 2.08[F][3] (2014). In short, costumes must meet the requisite “modicum of creativity” to be considered an original work of authorship, excluding what is necessary to allow a person to wear them as useful articles.

The interesting thing about cosplay is that it is truly only the “creative aspect” that is copied, because much of what is added that is necessary to make a fictional costume from a cartoon into a reality would fall under the definition of a useful article. Of course, this is assuming someone creates an exact replica (or as close as possible given the laws of nature) of a character’s costume. Changing the costume, such as by making a medieval version or doing a genderswap, but maintaining the original aesthetic opens up new questions on exactly what parts of the costume are protectable. 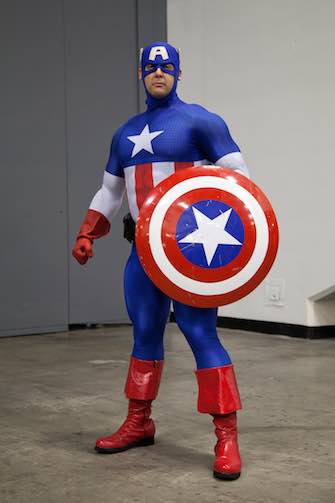 But cosplay isn’t just about costumes, it’s about the characters. Many cosplayers commit to the character they are emulating. It’s not just about wearing the costume, it’s about walking the walking and talking the talk. When discussing the copyrightability of characters, the idea/expression dichotomy is strongly in play because certain elements of any character will be part of the public domain, but it is the unique expression and combination of elements that makes a character copyrightable. Thus, mere stock characters or archetypes are not subject to copyright protection. A stock character is an embodiment of the concept of scènes à faire, which are those elements of an image (or character) that flow naturally and necessarily from the choice of a given concept and thus cannot be claimed as original, such as the absent-minded professor or cowboy cop. So, characters need to be especially distinctive to obtain copyright protection outside of their own story; names, unique appearances, and distinguishing features all play a role in determining distinctiveness. It’s worth noting, especially in the cosplay context, that animated and drawn characters tend to have stronger copyrightability than their physical counterparts because of their many design elements.

But can cosplay trigger the copyright in a character? After all, copyright only extends to original works of authorship fixed in a tangible medium for more than a temporary period. Are cosplayers “fixed?” That is, are living, breathing, people considered sufficiently permanent or stable to be perceived for more than a transitory duration? Obviously, in the traditional sense they exist and are perceived, but from a legal standpoint, the cosplayers themselves may be too transitory to trigger copyright concerns. Just as a voice, as opposed to the recording of a voice, cannot be fixed in a tangible medium, neither can a person.

A person’s identity, persona, or likeness can encompass their name, signature, photograph, image, voice, or even a catchphrase, so long as the characteristic identifies the person. And the injury suffered doesn’t even have to be purely to the plaintiff, in Fraley v. Facebook, the class-action plaintiffs showed their economic injury through Facebook’s using their likenesses in paid commercial endorsements targeting other consumers (“sponsored stories”). 830 F.Supp. 2d 785, 809 (N.D. Cal. 2011). The plaintiffs were able to overcome a motion to dismiss based on this theory before ultimately settling the case. Id.

So, would it be possible for a cosplayer to a have a right of publicity claim? It seems like it could be a shaky cause of action considering the costume aspect, but it could be plausible. After all, many cosplayers show their faces and highlight their own creative talents in arranging and creating their costumes, simply dressing up doesn’t necessarily negate or waive their personal publicity rights.

Comic-Con and other conventions are a great means for people to meet up and discuss their favorite TV shows, books, and movies. And considering the media attention Comic-Con gets and the amount of planning that goes into it, nobody ever fooled themselves into thinking it was a simple gathering to arrange. Although it’s unlikely (and extremely unwise, from a PR standpoint) that a right’s holder would ever bring a copyright action based on cosplay or Comic-Con shenanigans, it is interesting to see the rights at issue and know that the cosplayers themselves have some protection in their own right. Now if you’ll excuse me, I’ve got some movie trailers to catch up on. . .

Amanda Bacoyanis is admitted to practice law in Illinois state and federal court. She has an LL.M. in Intellectual Property Law with a focus in trademarks, copyrights, and internet security issues. In [...see more]